The June 16, 2014 Edition of RAW is a Professional wrestling television show of the WWE's RAW brand, which took place on June 16, 2014 at the Quicken Loans Arena in Cleveland, Ohio.

For the first time since the great abeyance of 2013, the WWE Universe is without a champion. And with Daniel Bryan's vacated WWE World Heavyweight Title on the line at Money in the Bank, The Authority took the time on Raw to address their subjects about the future of the supreme prize. The upshot of their address – minus a few zingers thrown in the recovering “B-plus player” Bryan's direction – was that the final spots in the WWE World Heavyweight Championship Ladder Match would be determined later on Raw. The first, in a Battle Royal that would encompass the entire roster, minus the Superstars that had yet to “evolve” (translation: The rebellious John Cena and the remaining members of The Shield). And the second, in a Stretcher Match – the bout Bryan would have had at Money in the Bank – between Cena and the demon Kane.

Dolph Ziggler wouldn't be much of a showoff if he didn't poke the corporate bear, and even though his first two swings against Triple H's newest protégé, Seth Rollins, ended in lights out, the former World Heavyweight Champion brought all he had and then some in the third installment of a two-week rivalry. Ziggler seemed to finally have found his stride against the former Architect of The Shield, escaping Peace of Mind and reversing Rollins’ corner powerbomb into a sunset flip pin attempt.

Rollins eventually found his stride, slowing The Showoff to a crawl and connecting with Peace of Mind, but Dean Ambrose rushed the ring in a leather jacket and jeans to put the boots to his former brother, handing Dolph a DQ loss but serving notice to Rollins that he's very much still a marked man. Alas for Ambrose, his meddling put him in the crosshairs of The Game, who summoned Bad News Barrett, once again, to handle a meddlesome Shield veteran.

Can it be that Triple H enjoys dispensing bad news just as much as Bad News Barrett? The Game unleashed the Intercontinental Champion on the second Shield soldier in two weeks, though much like Barrett's SmackDown rumble against Roman Reigns, the tilt was marred by a late-game interference that cost the champ the match on a technicality.

All things considered, the inevitable interference may have been the gift of mercy for two Superstars who didn't wrestle so much as beat the snot out of each other for 20 minutes. Ambrose pounced on Barrett like a rabid bandicoot and the titleholder replied by targeting Ambrose's less-than-healthy shoulder. The reappearance of Seth Rollins drove Ambrose to abandon the bout and chase his former Shield-mate into the crowd to the tune of a count-out loss. A post-match Dirty Deeds to the victorious Barrett, however, assured the wild man went out on a high note.

Even as Bray Wyatt marches toward Money and the Bank and the ultimate “power and influence” that will place the whole world in his hands, the quest for absolution found him at the business end of the very ladder that might bring him that glory in two weeks’ time, courtesy of Sheamus. Which isn't to say Wyatt didn't prove himself worthy of a potential reign as WWE World Heavyweight Champion before things went pear-shaped.

“The Man of 1,000 Truths” turned Sheamus’ pearly white flesh a gruesome shade of black and blue with headbutts and elbows. Even though the Dublin brawler responded appropriately and The Usos joined the fray as backup for the Irishman, Wyatt impressively went shot-for-shot with the reigning U.S. Champion. By the time Sheamus did find his footing, the Wyatts had seen enough and pounced on the Celt right as he was setting up for the Brogue Kick. The interference cut the match off with a DQ and instigated a massive brawl between Sheamus, The Usos and all three Wyatts at ringside that ended with Irish (and Samoan) eyes smiling, and the Wyatts stewing for revenge.

What is dead may never die but rock ‘n’ roll will live forever, so despite the breakup of 3MB, it was something of a joyous homecoming for Heath Slater, reborn once again as The One Man Band. Unfortunately for the gutsy former WWE Tag Team Champion, having two less rockers to rumble with made him easy fodder for Rusev in The Super Athlete's latest conquest on his path of destruction. Suffice it to say “the United Slates of America” didn't exactly get off to a great start; a gutsy effort led to furious retaliation and a monstrous Accolade from the brute that left Slater no choice but to submit. Better luck next time, babaaayy.

Raw Guest Star Kevin Hart will be telling audiences to “Think Like a Man” with the release of this Friday's “Think Like a Man Too,” but the only thing he was thinking like was a Rosebud after being conscripted into Adam Rose's party crew. It would have been hard for him not to join Rose's crew, to be fair, given his front-row seat at commentary to the Mixed-Tag mayhem that pitted Fandango & Layla against the team of Rose & Summer.

The bout ended in rather abrupt fashion – Summer and Layla brawled up the ramp and a flummoxed Fandango was Party Foul’ed into oblivion – but Hart's hesitance to join the Rosebuds evaporated even quicker. All it took was a beckon from Rose for Hart to leave his seat and trust-fall into the fold, while JBL screamed in horror ... not that you could hear him over the singing.

Who says Roman Reigns hasn't evolved? The big Hound sheathed his Superman Punch for some behind-the-scenes maneuvering to finagle his way into the WWE World Heavyweight Championship Qualifying Battle Royal and took it to the bank in the process, conquering the rest of the locker room to punch his ticket to Boston and earn his spot to challenge for the supreme prize at Money in the Bank.

Reigns – no stranger to going the distance in Battle Royals – withstood attacks from the likes of RybAxel, Bad News Barrett and even Bo Dallas (a.k.a. "Mr. NXT") to make it to the final two. That his last opponent was Rusev surely gave some of the WWE Universe jitters (he's going to fight that?) but Reigns didn't sweat his clash with The Super Athlete for a second: Even though Rusev pancaked Reigns into the corner with a pair of monstrous splashes, a Superman Punch to the apron-stranded brute sent "The Fist of Russia" crashing to the ground and propelled Reigns to Money in the Bank.

The only question left is what happens to Vickie Guerrero, who defied Authority and let Reigns into the contest in the first place. McMahons, after all, always pay their debts.

A slap to the face doesn't only make for an extra-juicy segment on “Total Divas,” it can also be the catalyst for a crazy-competitive confrontation in the ring. A slighted Cameron five-starred Paige on the WWE App and got a firsthand look at The Diva of Tomorrow's dominance as a result, though the feisty Funkadactyl didn't just roll over for the 21-year-old Divas Champion. She actually put up a tough – if dirty – fight, seeking more to provoke Paige with more slaps than beat her properly. The champion, unlike her opponent, however, kept her eye on the prize and eventually got down to business, kicking Cameron in the chin and hoisting her into the PTO for the win.

Maybe all Cody Rhodes needed was, as Michael Cole called it, a “change in persona.” The former Intercontinental Champion promised his brother a tag-team partner that matched The Bizarre One in magnificence and the mysterious Stardust came as advertised. He was Goldust's match in in-ring capability as well; the tandem handily dispatched RybAxel thanks to Stardust's slithery theatrics, punctuated by a top-rope attack that sent Curtis Axel tumbling to his defeat. No smoke and mirrors here.

John Cena has always been a vocal supporter of Daniel Bryan, and despite The Authority's needling, the 14-time World Champion put his money where his mouth was on Raw. Cena went to win one for The Beard and, despite a cavalcade of interference, did just that, besting the Devil's Favorite Demon in the very bout the “Yes!” Man was set to compete in at Money in the Bank before being stripped of the WWE World Heavyweight Title.

The first Stretcher Match on Raw in nearly 10 years was appropriately brutal, with Cena and Kane ditching fists and maneuvers for chairs to the torso and, at one point, an Attitude Adjustment to Kane through the announce table. Seth Rollins and Randy Orton arrived to save the demon's charred hide just as Cena was set to roll him across the finish line, though Dean Ambrose acted as an equalizer and allowed Cena to finish the job, AA’ing Kane atop the stretcher and giving him one final push. Next stop? Money in the Bank.

1. Damien Sandow (by everyone)

The Authority addressed the WWE roster 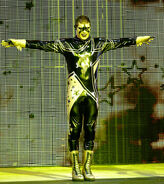 Retrieved from "https://prowrestling.fandom.com/wiki/June_16,_2014_Monday_Night_RAW_results?oldid=1558808"
Community content is available under CC-BY-SA unless otherwise noted.