ORLANDO, Fla. — As TakeOver: The End of The Beginning came to a close, a new chapter in NXT began. NXT's new start kicked on in a painful manner. Just one week removed from their destructive arrival in NXT, The Authors of Pain made their in-ring debut. Led to the ring by WWE Hall of Famer Paul Ellering, the two as-of-yet unnamed behemoths laid waste to the poor saps standing across the ring from them. Much like they did to American Alpha at TakeOver, The Authors of Pain demolished their opponents before nearly taking one's head off with a Russian leg sweep/clothesline combination to earn the victory.

Ellering and the Authors were found backstage by Andrea D’Marco, but the Hall of Famer was unwilling to give up any information about his massive charges.

On her own and out to carve a path toward the NXT Women's Championship, Carmella took on some stiff competition this week, in the form of third-generation competitor Tessa Blanchard. The daughter of WWE Hall of Famer Tully Blanchard went right after Carmella, but could not stop the feisty Princess of Staten Island. Carmella finished off an impressive victory by locking on the inverted triangle hold she calls the Code of Silence, forcing Blanchard to tap out.

Despite seemingly going their separate ways several weeks ago, Blake & Murphy got back together this week to give it one more shot as a team. The former NXT Tag Team Champions were hoping their fortunes would change, but could never get out of first gear against TM-61. Blake & Murphy trapped Shane Thorne in their corner briefly, but the Australian sent the former champions crashing into each other before tagging a fired-up Nick Miller in. TM-61 soon found themselves alone in the ring with Blake and connected with the impressive double-team maneuver they call Thunder Valley to pick up their first win on NXT!

The Perfect 10 demanded a rematch with Andrade “Cien” Almas and got his wish, hoping to even things up with the NXT newcomer. The two grapplers looked to be evenly matched, until Dillinger stopped to mock Almas, catching a dropkick to the jaw for his efforts.

Almas took control of the bout, only losing when Dillinger yanked on his hair, slamming him to the canvas. The Perfect 10 took advantage of the opening, showing a mean streak while he punished Almas. However the luchador regained his composure and fought back, taking flight with a beautiful twisting dive onto Dillinger. Back in the ring, “Cien” proved that TakeOver was no fluke, as he clobbered Dillinger with rushing double knees in the corner to get the three-count.

Seven days removed from his crushing loss to NXT Champion Samoa Joe, Finn Bálor came to the ring to address the world. With the NXT Universe firmly in his corner, Bálor recounted the many wars he fought between the yellow ropes, though he couldn't help but be disappointed that he did not leave the steel cage with the NXT Championship.

With TakeOver in the rear-view mirror, Bálor asked himself the question that everyone wants to know: What's next for Finn Bálor? The former champion didn't have to wait long for an answer, as Shinsuke Nakamura made his presence felt in the arena. The King of Strong Style called Bálor the “icon” of NXT, but declared that if he wanted to become NXT Champion, Nakamura needed to defeated Bálor. As the crowd roared in approval, Bálor accepted The King of Strong Style's challenge. The two friends shook hands, sealing the deal on, perhaps, the biggest dream match in NXT history. 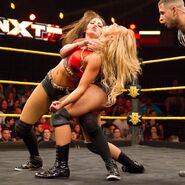 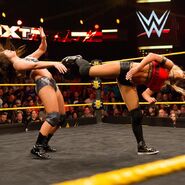 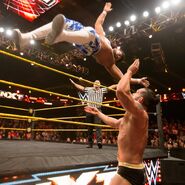 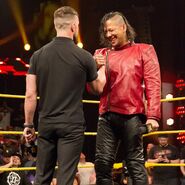 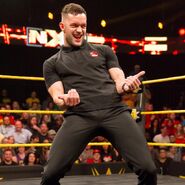