The June 13, 2011 Edition of RAW is a Professional wrestling television show of the WWE's RAW brand, which took place on June 13, 2011 at the Nassau Coliseum in Uniondale, New York. "Stone Cold" Steve Austin was the special general manager on a WWE RAW All-Star night.

The Miz may be arrogant, but he isn't ignorant. At least he proved to have a smidgen of smarts when he was confronted by Raw’s guest General Manager, “Stone Cold” Steve Austin, who will oversee “WWE All Star Night,” a three-hour spectacle featuring Superstars from Raw and SmackDown.

The Texas Rattlesnake told The Cleveland Screamer that he wasn't about to apologize for nailing him with a Stunner the week prior. Rather than run his trap, Miz kept quiet for the most part, and listened as the WWE Hall of Famer informed him that he and his rival, Alex Riley, will air their differences later in the night with “Rowdy” Roddy Piper on Piper’s Pit.

After sending Miz scurrying, “Stone Cold” was then interrupted by Alberto Del Rio. The Mexican Aristocrat poured out some hollow boasts before The Texas Rattlesnake cut him off. “Stone Cold” explained to Del Rio that he didn't much care for him ever since one of his luxury autos “accidentally” plowed into Big Show. Therefore, The Mexican Aristocrat would be forced to face off against Big Show’s former tag partner, Kane.

If you're going to hurt Big Show by running him over with an automobile, next time make it a Hummer. Two weeks after his assistant, Ricardo Rodriguez, “accidentally” plowed into The World’s Largest Athlete, Alberto Del Rio faced the wrath of the freshly rehabbed Big Show.

Del Rio had been battling Big Show’s partner, Kane, when he was disqualified for refusing to relent on a Cross Arm Breaker. Afterward, a vengeful Big Show charged the ring and clobbered The Mexican Aristocrat. Rodriguez jumped the towering terror to save his boss, who scurried from the ring as his lackey took a lashing.

Ezekiel Jackson may have “loosened the jar,” but it was Sin Cara who got to open it – with style, of course. The two teamed up with Daniel Bryan to take on their fellow SmackDown Superstars, Intercontinental Champion Wade Barrett, Cody Rhodes & Ted DiBiase. With just six days before they face off in a title match at Capitol Punishment, Jackson pummeled his rival Barrett to within inches of acquiescence. But it would be the faceless flyer, Sin Cara, who would net the three-count for his squad.

Pick on someone your own size! That was “Stone Cold” Steve Austin’s message to R-Truth after he caught the touched Superstar tormenting Hornswoggle. As a result, the guest Raw GM arranged a match pitting Truth against John Morrison – the man taken out by the conspiracy theorist weeks ago – for later in the evening.

Although Santino Marella had been triumphant as of late, even The Cobra failed to fell the Irishman. Sheamus felt the fangs sink in and even had his shoulders pinned for a two-count, but The Celtic Warrior would survive to drive out the snake. He broke free from Santino, leveled the Italian with a jaw-jangling Brough Kick and forced him to tap out.

World Heavyweight Champion Randy Orton will just have to wait. After a second consecutive week being attacked by a resentful Christian, The Viper goaded Captain Charisma to the ring with vengeful intent. Before he could attack, however, Raw’s anonymous GM interrupted and informed Orton that he could not allow him to compete until Sunday at Capitol Punishment due to the fact Orton had suffered a concussion during Christian’s latest attack.

Christian’s snide smile, though, would be short-lived. Guest Raw GM, “Stone Cold” Steve Austin emerged to inform Captain Charisma he must face Rey Mysterio right then and there.

Really, CM Punk? You and your cowardly New Nexus cohorts are going to ambush Rey Mysterio as he fights off Christian? Weak.

Unfortunately for Rey, that's precisely how things went down as the high-flyer battled Christian, even after the match had ended. When Captain Charisma was disqualified for refusing to abide the referee, he continued to punish Rey. The Master of the 619, however, fought back until Punk and his disciples ambushed him. Christian then had the audacity to hit the Killswitch on Rey, regardless. Double weak.

When Vickie Guerrero insisted that guest Raw GM “Stone Cold” Steve Austin arrange a title match between her "project" Dolph Ziggler and U.S. Champion Kofi Kingston, The Texas Rattlesnake agreed, under one condition: Ziggler must dump Vickie as his consultant. After mulling it over, the athletic young Superstar agreed. “Stone Cold” then informed the two he was just kidding and had already arranged the match earlier in the day. Awk-warrrddd!

John Morrison suffered a preemptive strike prior to his match against R-Truth, compliments of the “Jimmy”-hating jerk. When Truth trekked back to the locker room area to find his opponent, Morrison was writhing in pain and being attended to by WWE personnel. The unbalanced Superstar as much as admitted to having waylayed JoMo before their match and then got in one last, ugly parting shot.

When U.S. Champion Kofi Kingston & Evan Bourne teamed up to face their respective rivals Dolph Ziggler & Jack Swagger, the high-altitude athletes proved quite the potent pairing. Although the Dreadlock Dynamo will defend his title against Ziggler this Sunday at Capitol Punishment, it was “Air” Bourne who rocketed to victory by pinning The All-American American.

The Miz has often been compared to “Rowdy” Roddy Piper – a comparison neither man finds particularly flattering. When the two met during an edition of Piper’s Pit, the WWE Hall of Famer made it perfectly clear he didn't care for Miz and frustrated the usually sharp-tongued Superstar. Just then, Piper invited Miz’s former lackey Alex Riley to the show. A-Ry boasted that not only could he beat The Awesome One, he was sure “Hot Rod” still had enough to take Miz, too.

Soon enough, Miz and Piper had wagered $5,000 on who would prevail in a match between the two. To make it official, guest Raw GM “Stone Cold” Steve Austin arranged the bout – with Riley acting as special guest referee! Proving he can be every bit as ruthless and cunning as his former boss, A-Ry leveled Miz, allowing The Rowdy One to win the match – and the money.

For an appearance on the game show The Price is Right, Kelly Kelly and The Bella Twins recently put aside their differences. Inside the ring, however, it was time for a showcased showdown. In a 7-on-7 All Star Divas Tag Team Match, the beautiful blond teamed with Eve, Gail Kim, Beth Phoenix, Natalya, Kaitlyn & AJ to square off against Divas Champion Brie Bella, Nikki Bella, Maryse, Melina, Alicia Fox, Tamina & Rosa Mendes. And when the Divas were done and the fighting finished, it was Kelly Kelly and her teammates who had prevailed.

The Texas Rattlesnake promised that the WWE Universe will soon get to call the shots. “Stone Cold” Steve Austin announced that next week will be Raw: Power to the People, one night that allows the WWE Universe to have their voices heard loud and clear, determining matches, stipulations and more. To put an exclamation point on his statement, The Texas Rattlesnake destroyed the anonymous GM’s laptop computer for good measure.

R-Truth is crazy like a fox. As the No. 1 contender for the WWE Title, Truth plotted to improve his odds going into this Sunday’s Capitol Punishment, when he will face off against WWE Champion John Cena. As The Champ competed against CM Punk, he proved unrelenting in his attack. Never one to give up, Cena fought through The Second City Savior’s assault.

And since The New Nexus was banned from ringside, The Champ probably thought he was in for a fair fight. Alas, Truth wasn't about to let that happen, not with a mere six days until their title match at Capitol Punishment. The “Jimmy” hating jerk distracted Cena, handing Punk the opportunity he needed to overcome The Champ. Truth then snatched the WWE Title, clobbered Cena in the face with it and taunted his incapacitated adversary. 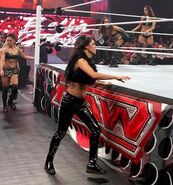 Retrieved from "https://prowrestling.fandom.com/wiki/June_13,_2011_Monday_Night_RAW_results?oldid=1558796"
Community content is available under CC-BY-SA unless otherwise noted.