The June 12, 2017 Edition of RAW is a Professional wrestling television show of the WWE's RAW brand, which took place on June 12, 2017 at the Cajundome in Lafayette, Louisiana.

Paul Heyman promised The Beast would be unleashed on this week's Raw, and The Advocate's premonition indeed came true, though Samoa Joe proved ready for it.

What was initially set to be Universal Champion Brock Lesnar's triumphant response to his No. 1 contender's “message” on last week's Raw quickly turned into an all-out brawl between champion and challenger. Joe crashed The Conqueror's first appearance since the Raw after WrestleMania, proving he was as unafraid of Lesnar as he previously professed.

Heyman said that while Joe's Coquina Clutch could be the difference-maker at the Great Balls of Fire pay-per-view, he didn't think Joe was “man enough” to lock in the hold, and that claim brought the No. 1 contender to the ring for a face-to-face.

The tense staredown between champion and challenger turned physical in a hurry after Joe headbutted Lesnar to the ground. The brawl grew so intense that Raw General Manager Kurt Angle dispatched a platoon of security guards to restrain the two bruisers, to no avail. Angle's backup plan was to send nearly the entire Raw locker room to the ring, and the plethora of Superstars finally managed to separate the behemoths — but just barely.

Dean Ambrose is still willing to walk with Elias Samson — but thanks to The Miz, the former Intercontinental Champion can't quite seem to beat him.

Despite suffering a clothesline that nearly knocked him out of his boots, The Lunatic Fringe fought back from the brink to put the burly balladeer on his heels during the latest installment of their rivalry.

The A-Lister made his presence known at the moment of truth, and while the Intercontinental Champion crucially refrained from laying hands on Ambrose, his presence was enough to seal The Lunatic Fringe's fate. Ambrose chased Miz around the ring, dove back into the squared circle when he realized he was about to be counted out and immediately ate a knee to the back from Samson. The sinister serenader followed up with the rolling neckbreaker for the win.

Alicia Fox might be laid up with a neck injury, but that didn't stopped her from weighing in on the Noam Dar-Cedric Alexander rematch following The Scottish Supernova's loss on 205 Live last week.

Given the long history between Cedric, Dar and Alicia, the former Divas Champion obviously had a vested interest in this contest and insisted on FaceTiming Dar (with her voice amplified for all the Cajundome to hear) the entire time so she could see what happened in the match.

Unfortunately, Noam couldn't get his lady love to hang up the phone after the bell rang, so Cedric dispatched him almost immediately with the Lumbar Check. When Dar picked the phone back up, he received a fresh scolding from his furious girlfriend, who was frustrated he wasn't immediately replying to her. “Communication is key!” she exclaimed. Fair point, though Dar could probably have used a little less of it in this instance.

The Kingslayer interrupted Wyatt's preaching and confronted the pulpit, leading to a standoff with The Reaper of Souls himself. A still-unimpressed Rollins called out Bray's M.O. of striking from the shadows, though Wyatt insisted that The Architect did not want to go any further down this road than he already had.

He gave Seth due respect for slaying a King, but a “god,” he claimed, was a little beyond his reach. As if to demonstrate, The Eater of Worlds disappeared from the ring and reappeared on the TitanTron, giving Rollins his signature piece of time-honored advice: Run.

After a rocky start to his courtship of Akira Tozawa last week, Titus O’Neil went full-court press in his attempt to recruit The Stamina Monster to The Titus Brand. Besides deeming Tozawa a WWE Cruiserweight Champion-in-waiting on Twitter, The Big Deal put him up at ringside for Apollo Crews vs. Kalisto to give him a taste of what The Titus Brand can do.

O’Neil may have stretched himself a little thin — he alternated between talking up Crews and schmoozing up to Tozawa — but luckily, Crews pulled out the win, reversing Kalisto's handstand into the Spinning Sit-out Powerbomb. The victory gave him and O’Neil something to celebrate, but Tozawa's expression upon being yanked into the ring to join them for a post-match selfie was more apprehensive than anything else.

Alexa Bliss managed to hang on to her Raw Women's Title on a technicality last week, but she put herself in the unenviable position of having nearly every woman in the Team Red ladies’ locker room — including a returning Emma — gunning for her prize.

A confrontation between Bliss and the assembled women of Raw — minus Bayley, who still hasn't competed since losing her title rematch — led to a Six-Woman Tag Team Match among champion and potential challengers.

During the bout, all of Bliss’ opponents — Sasha Banks in particular — wanted a piece of her. When Sasha had Emma on the ropes, Alexa did the only thing she could do: Ditched the match before being tagged in, leaving Emma to tap out to a match-ending Bank Statement after Mickie James neutralized Nia Jax.

Of course, Six-Woman Tags don't decide titles, and Alexa's championship reign will continue. However, it's fair to question whether Little Miss Bliss has missed an opportunity to shore up allies for the fights to come.

Bear with us here, because this gets a little complicated.

First, after Raw General Manager Kurt Angle told Miz he was on his own against Dean Ambrose, The Awesome One attempted to poach Heath Slater to his side as an ally, which led The One-Man Band's tag partner, Rhyno, to challenge The A-Lister to a tag match — provided, of course, he could find a partner of his own. That turned out to be a giant bear, much like the one Miz suspected was Ambrose in disguise during last week's catastrophic Intercontinental Championship coronation.

Suspicious of his ursine ally from the get-go, Miz attacked the bear and removed its giant head, only to reveal, once again, that it wasn't Ambrose, at which point he threw the bear out of the ring in frustration.

The bear seemingly recovered in time to re-enter the fray, but when he hit Dirty Deeds on Slater, the WWE Universe realized a switcheroo had been pulled and Ambrose had finagled his way into the match. Miz was too banged-up to notice, and a panicked Maryse couldn't get her husband's attention to warn him.

But when The Lunatic Fringe revealed himself, Miz freaked and accidentally bumped Maryse off the ring apron in his attempt to flee, leading to Ambrose planting his rival with a Dirty Deeds. Ambrose then placed The One-Man Band atop Miz for the win and covered Miz's head with his mask, leaving WWE's self-dubbed “It” couple to suffer more humiliation than anyone can possibly bear.

With his “Austin Aries problem” in the rearview and his next title defense four weeks away at the WWE Great Balls of Fire pay-per-view, Neville is cleaning up in the Cruiserweight division.

The King of the Cruiserweights dispatched his would-be protégé, TJP, on 205 Live last week and continued his roll by attacking Rich Swann before their match could begin, sending him into unconsciousness with the Rings of Saturn. After dispatching Swann, Neville directed some choice words toward Akira Tozawa, who Neville is nowhere near ready to acknowledge as a potential contender to his throne, no matter what Titus O’Neil tweets about his potential Titus Brand talent.

Big Show's sub-in for Big Cass following the latest sneak attack by Raw's mystery attacker (attackers?) left a poor taste in Cass’ mouth last week. But with Cass all healed up, The Realest Guys in the Room were set to reaffirm their tag team top-dog status on Raw, until Big Cass was jumped once again (that was The Revival lurking a few yards away from the scene, by the way), leaving Enzo Amore potentially without a partner against Luke Gallows & Karl Anderson for the second week in a row.

Don Parmesan insisted on competing despite his injury, and while he did a fair amount of damage, Cass wasn't much use to Smacktalker Skywalker after Enzo tagged in to spell him. The “good brothers” made quick work of Enzo with the Magic Killer and prepared to administer more punishment after the bell ... at least until Big Show once again came to the rescue, much to the dismay of Cass.

Moments later, in a tense backstage confrontation, Enzo, asked Show point-blank if he was behind the recent attacks, having deduced that anyone who could take Cass down with one blow had to be packing a serious punch. Show bristled at first, but then came to a simpler conclusion: That Big Cass was merely what he'd always described his opponents to be: "S-A-W-F-T."

One of the good things about a 2-out-of-3 Falls Match is that it never leaves a doubt as to who truly earned the victory ... except, of course, for the rare occasion that it does.

The 2-out-of-3 Falls Raw Tag Team Title Match (the first Tag Team Title variation of the bout in the history of Raw) between Cesaro & Sheamus and The Hardy Boyz brought out the best in both tandems, with The Alabaster Gladiator quickly landing the first fall on Jeff Hardy following a Brogue Kick, and a wild Matt Hardy claiming the second after slamming Cesaro's his head onto each turnbuckle and executing a Twist of Fate.

Seeking fall No. 3, Jeff swooped down with a Swanton Bomb on Sheamus, but Cesaro saved the match by pulling The Celtic Warrior out of the squared circle, kicking off a wild brawl at ringside that resulted in a double count-out.

As a result, the match ended in a draw, which allowed Cesaro & Sheamus to retain their titles. The champions were left in a relieved heap on the ramp, but while The Hardy Boyz didn't score the final fall, they were the only team left standing in the ring and looking ready to do it again. 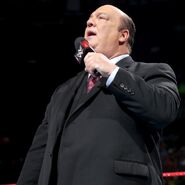 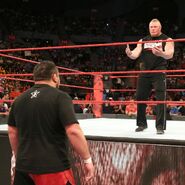 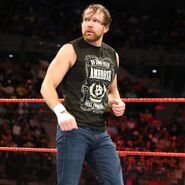 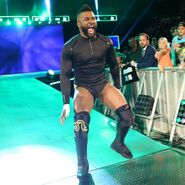 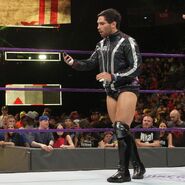 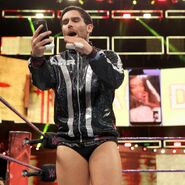 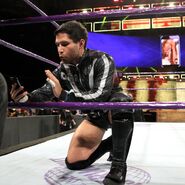 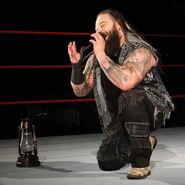 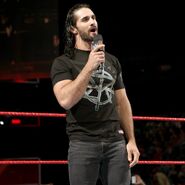 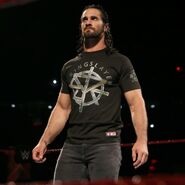 Heath Slater & Rhyno vs. The Miz & A Bear 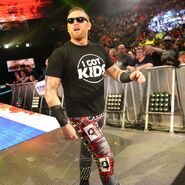 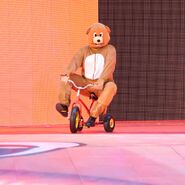 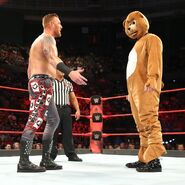 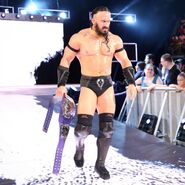 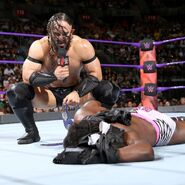 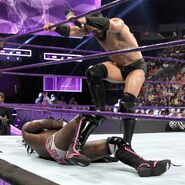 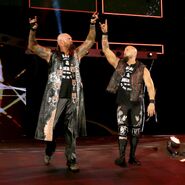 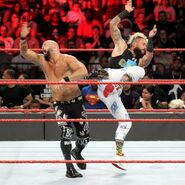 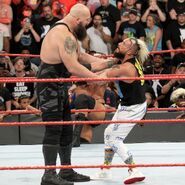 Cesaro & Sheamus vs. The Hardyz 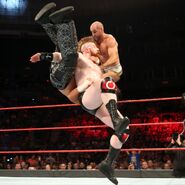 Retrieved from "https://prowrestling.fandom.com/wiki/June_12,_2017_Monday_Night_RAW_results?oldid=1558792"
Community content is available under CC-BY-SA unless otherwise noted.