June 7, 2016
The June 1, 2016 Edition of NXT is a Professional wrestling television show of the WWE, which took place at the Full Sail University in Winter Park, Florida on May 19, 2016. The episode features an exclusive interview with NXT Champion Samoa Joe and the challenger Finn Bálor, hosted by Corey Graves.

Tensions were running high in NXT, with TakeOver: The End... just one week away. Everyone was on edge, including NXT Tag Team Champions The Revival. Scott Dawson & Dash Wilder declared that they were going to take back their titles from American Alpha. Johnny Gargano & Tommaso Ciampa disagreed, saying that not only can't The Revival beat Jason Jordan & Chad Gable, Dash & Dawson couldn't beat them. The trash-talking led to a scuffle between the two teams, with Gargano & Ciampa sending the No. 1 contenders scrambling up the ramp, setting the stage for a showdown between the duos later in the evening.

Everyone is trying to make an impact in NXT with TakeOver on the horizon, especially Tye Dillinger. The Perfect 10 was in perfect form against Buddy Murphy, who's still trying to get back on track after falling out with Blake and Alexa Bliss. Dillinger capitalized, slamming Murphy's head onto his knee to pick up a perfect victory.

Corey Graves found himself in an uncomfortable position, sitting between NXT Champion Samoa Joe and Finn Bálor for an interview just one week before their historic Steel Cage Match. Bálor was frustrated with his title loss and what he saw as Joe's entitlement, while the NXT Champion was furious that Bálor seemed to be ducking him after promising him a title match.

The two former friends sniped at each other, before Bálor declared that he's not worried about the future, only in regaining the NXT Title, and told Joe to enjoy his reign on top while it lasts.

With a first time showdown with Shinsuke Nakamura on the horizon, Austin Aries was out to tune up for the battle this week, taking on Elias Samson. The Drifter was ruthless in his attack on Aries, but “The Greatest Man That Ever Lived” withstood and bounced back, forcing Samson to tap out to the Last Chancery. Will The King of Strong Style meet a similar fate when he steps in the ring with Aries next Wednesday?

The furious duo of Dash & Dawson was out to prove that it was only a matter of time before they regain the NXT Tag Team Titles. However, they found themselves on the defensive early on in this bout against the upstart team of Gargano & Ciampa. The Revival had to resort to nefarious tactics to take control, taking advantage of a distracted Gargano to pummel Ciampa on the arena floor.

Eventually, Dawson thought he had Gargano on the ropes after planting him into the canvas with a DDT. However, when he tried to end the bout with a Superplex, Gargano rebounded off the canvas and trapped Dawson in a small package to upset the former champions! The embarrassment set The Revival off, as they hit Ciampa with the Shatter Machine and attempted to use the stomp that injured Big Cass’ knee on him.

But before they could do anymore damage, American Alpha rushed to the ring and sent The Revival running. There will be nowhere to run next Wednesday when the two teams clash at TakeOver. Who will walk out with the NXT Tag Team Titles?

No. 1 contender Nia Jax showed no respect for the NXT Women's Champion as they signed the contract for their showdown at TakeOver: The End... Jax declared that while Asuka may have defeated Bayley for the title in Dallas, Nia broke Bayley and put her out of action. The towering challenger brazenly declared that she wasn't afraid of The Empress of Tomorrow before putting pen to paper.

Asuka signed the contract and said to Jax that if she wasn't afraid, she should be. The champion stepped right up to her challenger, ignoring Nia's warning from last week. Jax shoved the champion, causing Asuka to unleash a flurry of strikes. However, when Asuka threw one of her trademark kicks, Jax caught her leg and lifted the champion up, slamming her down to the mat with a vicious powerbomb. The NXT Universe was stunned, as Asuka looked vulnerable for the first time since her arrival. Will Jax be able to capitalize at TakeOver: The End... and capture the NXT Women's Title? 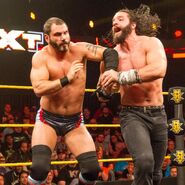 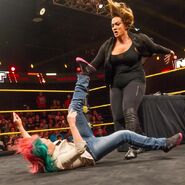