The July 9, 2012 Edition of RAW is a Professional wrestling television show of the WWE's RAW brand, it took place on July 9, 2012 at Pepsi Center in Denver, Colorado.

It was hosted by the Anonymous Raw General Manager, who made a return since 2011.

A monumental Raw SuperShow answered old questions (just WHO is the Anonymous Raw GM?) and new ones ("CM Punk, will you marry me?") as Money in the Bank drew near. From AJ and Daniel Bryan's shocking marriage proposals, to the long-awaited exposure of the meddling Anonynmous GM, Raw SuperShow was a two hours the WWE Universe would never forget. In addition to the action inside the ring, WWE, already the most socially active brand in sports-entertainment, announced the launch of the historic new RAWactive service that will give the WWE Universe unprecedented access and control over Monday Night Raw. Read the full results of a trailblazing Raw SuperShow, starting below.

Raw SuperShow opened with a veritable lovefest, as AJ began the show by delivering an impassioned address to both the WWE Universe and one of her would-be paramours, WWE Champion CM Punk.

What she had to say turned out to be ... surprising, to say the least. First, she assured The Voice of the Voiceless that she was “completely in control of [her] mental faculties at all times.” Then, AJ broke down into tears saying that nobody has ever cared for her quite like he has, and that he fills her with “passion and desire.” And while an increasingly uneasy Punk fidgeted nervously in the ring, AJ shocked the WWE Universe by dropping to one knee and asked for The Second City Saint's hand in holy matrimony.

Before Punk could respond, however, screams of “NO! NO! NO!” echoed throughout Denver's Pepsi Center and Daniel Bryan sprinted down to the ring. The No. 1 contender implored AJ not to marry Punk and to believe that Bryan never truly stopped caring for his former girlfriend. The “Yes!” man then one-upped his former flame by dropping to his own knee and proposing to his former flame.

It was here that things got really interesting: Punk and Bryan's ensuing back-and-forth threatened to erupt into physicality when the familiar “beep” and blinking lights of the Anonymous Raw General Manager greeted the WWE Universe for the first time in nearly a year. The Anonymous GM proved he hadn't lost a step when he placed the triumvirate into a Mixed Tag Match: Punk & AJ vs. Bryan & Eve. As the realization set in among the competitors, AJ assured her two men that “everything happens for a reason” and that she was sure she'd be leaving Denver with her future husband in tow.

The World Heavyweight Champion came out swinging against his ill-fated opponent on Raw SuperShow. Still smarting from his attack at the hands of Alberto Del Rio at Super SmackDown LIVE: The Great American Bash, Sheamus made quick work of The All-American American Jack Swagger, reversing the Swagger Bomb into a White Noise-Brogue Kick combo that sent quickly Swagger to the mat.

Of course, Del Rio wouldn't let Sheamus off that easily, appearing on the TitanTron and taunting The Great White from behind the wheel of his Ferrari. The Essence of Excellence sneered that he had embarrassed Sheamus on SmackDown and would relieve him of the title at Money in the Bank. While Del Rio's insults washed over The Celtic Warrior, Swagger lurched to his feet and was promptly met with a second Brogue Kick that sent him off to the showers.

As Santino Marella congratulated Zack Ryder on winning his way into the GM's office for Friday Night “ZackDown,” the U.S. Champion revealed that the Anonymous GM himself was allegedly present in the Pepsi Center. Armed with a Sherlock Holmes-style pipe and cap, Santino began an intrepid quest to determine the identity of the Anonymous GM. The game is afoot!

The Showoff Dolph Ziggler and the brutish expatriate Tensai made quick work of their dynamic opponents as four of the competitors in the Money in the Bank Ladder Match for the World Heavyweight Championship Contract clashed in tag team action on Raw SuperShow. It was ultimately Tensai who put the match away, pinning Christian and attacking Kidd outside the ring while Ziggler's manager, Vickie Guerrero, looked on in apparent admiration.

While Jerry “The King” Lawler and Michael Cole bickered on commentary over the future of the General Manager position, the Anonymous GM made his presence known again, decreeing that Lawler and Cole would face each other one-on-one ... if the WWE Universe wanted to see it happen.

The Funkasaurus proved he hadn't lost a step since suffering his first loss to Big Show two weeks ago, defeating Drew McIntyre with his trademark power strikes and headbutts. The Scottish Superstar seemed unimpressed by Clay's dancing, but the funky one made quick work of his opponent, felling McIntyre with a headbutt and flattening him with a splash to secure the 1-2-3.

The match began with a high-octane battle between Cena and Jericho before Kane and Big Show tagged in for an earth-shattering rematch of their contest the previous week. Kane got the upper hand early against The World's Largest Athlete, but Big Show's raw power proved a difficult test for The Devil's Favorite Demon. Jericho and Big Show, the former Unified Tag Team Champions, proved they hadn't lost a step in their strategy, each distracting the referee at various points and allowing the other to get in a few cheap shots against their opponents.

The match ultimately came down to Cena and Jericho, but before the Cenation leader could notch a three count on The Ayatollah of Rock ‘n’ Rolla, Big Show struck by pulling Cena off his opponent and decimating both him and Kane, sending the bout to a no contest. The giant then retrieved a pair of ladders from beneath the ring, laying waste to Kane and trapping Jericho's body between the folds of the ladder before Cena made his presence known again, driving Show out of the ring with a ladder of his own and celebrating in the ring.

The Great One turned heads once again on Raw SuperShow when he tweeted that he would make his return on the 1,000th episode of Raw on July 23. His goal? As always, The WWE Championship.

The masked lucha icon showed no ill effects of his ambush at the hands of Alberto Del Rio, using his high-flying attacks to ground The One-Man Band and earn his place in the Money in the Bank Ladder Match for the World Heavyweight Championship Contract. Slater did not take the defeat too well, claiming he could defeat any former World Champion who dared to challenge him.

The two-time WWE Champion gallivanted his way to the ring and soaked up the adulation of the WWE Universe, but when Slater hit him with a cheap shot, Backlund snapped and trapped The One-Man Band in the iron vise of his trademark Crossface Chickenwing.

It was then that Michael Cole demanded to see the results of the WWE.com poll that would determine if he would face Jerry “The King” Lawler later that night. The 350,000-plus members of WWE Universe who contributed voted “Yes” by a landslide, 75 percent in favor of Cole vs. Lawler.

The WWE Universe-mandated contest between Jerry “The King” Lawler and Michael Cole wasn't much of a contest, as the Hall of Famer pinned his smarmy opponent in a matter of seconds with an assist from Booker T. Lawler barely had time to celebrate, though, before the Anonymous GM decreed that Cole was the winner thanks to Booker's illegal aid in the bout.

The overture of Santino's theme music cut Cole's celebration short, though, as the snooping U.S. Champion power-walked to the ring and proclaimed he had searched the entire arena, save for underneath the ring, and determined the Anonymous GM, whoever it may be, was hiding there. Despite several emails of protest, however, the stars-and-stripes champion moved to investigate when he was dragged under the ring by an unseen attacker. Lawler moved to help Santino and yanked him to safety to reveal ... Hornswoggle!

The mischievous former GM had one last bit of mayhem up his sleeve, kicking Lawler and Cole in the knees and biting Santino's backside before dancing his way back up the entrance ramp, the era of the Anonymous GM brought to a close at last.

The Anonymous GM's final main event unfolded in typically dramatic fashion, as WWE Champion CM Punk teamed with AJ to face Daniel Bryan and Eve. The contest began with another thrilling back-and-forth between Bryan and Punk until the Divas tagged in and AJ managed the upper hand after some vicious offense by Eve.

But with the match in the balance, Bryan, in an apparent declaration of love for AJ, refused to let Eve tag him in and allowed AJ to secure the roll-up and the victory. The “Yes!” man reiterated his proposal from earlier in the night and offered to elope with AJ then and there. Punk grabbed the mic and declared that he refused to lie to AJ to claim her favor as guest referee, and that he wouldn't be marrying her in the hopes of keeping his title.

The noble declaration from The Second City Saint went seemingly unappreciated, as AJ laid a wicked slap across the face of the champion. Bryan grinned and spread his arms imploring AJ to “come home,” and AJ, seemingly distraught, staggered toward Bryan's embrace ... and slapped him as well, screaming “YES!” and leaving both champion and challenger wounded and befuddled for the second time in as many weeks. 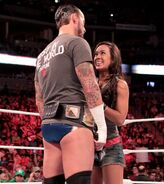 Retrieved from "https://prowrestling.fandom.com/wiki/July_9,_2012_Monday_Night_RAW_results?oldid=1558763"
Community content is available under CC-BY-SA unless otherwise noted.