July 15, 2011
The July 8, 2011 Edition of Smackdown is a Professional wrestling television show of the WWE's Smackdown brand, which took place on July 5, 2011 at the Tucson, Arizona in Tucson Arena.

Sheamus sent his seven opponents in the SmackDown Money in the Bank Ladder Match heading for the hills with a vicious chair assault, just nine days before they face-off at Money in the Bank. The Celtic Warrior proclaimed that after he triumphs in the career-threatening showdown, he will cash in his newly acquired briefcase that very night. Predicting Randy Orton would beat Christian, he promised to capture the World Title, while avenging the punt attack he suffered several weeks ago at the hands of The Viper.

Interrupting Sheamus, Christian revealed that his legal team added a new stipulation to his World Title Match against WWE's Apex Predator at Money in the Bank. If Orton gets disqualified or there is more “bad officiating,” he automatically wins the coveted title. SmackDown General Manager Theodore Long then broke up a heated exchange between the two intense Superstars, making the main event between Sheamus and Orton.

In the midst of tag team commotion, Cody Rhodes executed a springboard kick on Ezekiel Jackson, setting up Ted DiBiase to hit the Personification of Domination with Dream Street for the triumph.

One week after Ranjin Singh revealed that Jinder Mahal had married the sister of The Great Khali and Singh, The Punjabi Nightmare sat in for an “informative” exchange with the SmackDown announce team. Following Mahal's victory over Trent Barreta with a full nelson, suplex slam, Khali hurled the defeated Superstar back into his brother-in-law's arms, allowing Mahal to carry out an encore of his devastating finisher on his prey.

With third-generation Superstar Natalya by her side, A.J. once again attempted to overcome Tamina. When the dangerous daughter of WWE Hall of Famer "Superfly" Jimmy Snuka missed her mark – hurling herself toward the allusive spitfire in the corner – A.J. quickly rolled her up for the pinfall. After the bell, Tamina experienced an angry earful from her outraged Diva cohort Alicia Fox over the loss.

One week after his ruthless attack on a WWE audio technician, Mark Henry continued his rampage through WWE. After he defeated the monstrous Kane in a brutal showdown with The World's Strongest Slam, the rage-filled Henry shook up the SmackDown announce team, screaming at color commentator Booker T. At Money in the Bank, Henry will take on Big Show.

In the climactic moments of his fast-paced match with Tyson Kidd, the gravity-defying Sin Cara flipped his opponent off the ropes with extreme velocity, sending him crashing to the canvas for the three-count.

The ultra-resentful Christian – No. 1 contender to Randy Orton's World Heavyweight Title – joined the SmackDown announce team, giving himself a front row seat as The Viper battled Sheamus. And just when it looked as if WWE's Apex Predator was about to defeat The Celtic Warrior with the RKO, his Money in the Bank adversary attacked, giving Orton the win by disqualification. As Sheamus delivered the big boot to Christian, however, Orton recovered and hit the Irish Superstar with a post-match RKO. 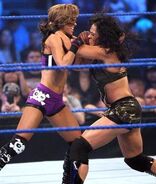 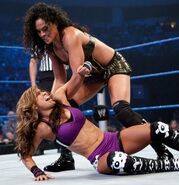 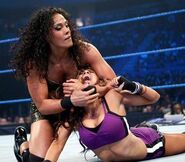 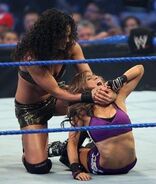 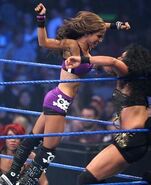 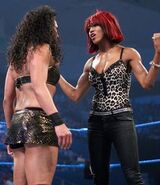 Retrieved from "https://prowrestling.fandom.com/wiki/July_8,_2011_Smackdown_results?oldid=1558142"
Community content is available under CC-BY-SA unless otherwise noted.