While Bayley is preparing for her guaranteed rematch against NXT Women's Champion Asuka, Alexa Bliss is trying to prove that she is the future of the division. The fierce Bliss showed why from the opening bell, as she used her nasty disposition to take control of the battle, stomping Bayley into the canvas.

Eventually, Bliss’ fury cost her, as the resilient Bayley battled back. Bliss nearly stopped Bayley in her tracks with a hard right hand, but there was no keeping the former champion down. Bayley prevented Bliss from hitting Twisted Bliss and eventually connected with the Bayley-to-Belly Suplex to get the three-count.

After the bout, Bayley acknowledged that she's been knocked down quite a bit in recent weeks, first by Asuka in Dallas, and then last month by Nia Jax, who put her on the shelf and cut Bayley in line for a title match. But before the resilient grappler could continue, Nia stormed to the ring and got in Bayley's face. Not backing down, the defiant Bayley challenged the towering Nia to another match, which Jax was all too happy to accept.

Earlier in the day on Facebook, Blake & Murphy agreed to team up one more time to try and recapture the success that led them to the NXT Tag Team Titles last year. However, before the bickering former champions could get their match against The Hype Bros going, a returning Rhyno crashed the scene.

The Man Beast charged to the ring and unleashed his fury on Mojo Rawley, Zack Ryder and Blake. The three felt the full force of Rhyno's devastating Gore. Murphy hurried away from the ring, evading the ECW Original's rage while the NXT Universe was wondering why The Man Beast is back between the yellow ropes.

Tensions were running high as The Revival and American Alpha awaited the opening bell of their 2-out-of-3 Falls Match for the NXT Tag Team Championship. Dash & Dawson found themselves retreating quickly in the opening moments of the match, as Chad Gable slipped out of Dash Wilder's clutches and applied an ankle lock that could have ended the first fall. American Alpha turned the tides of the fall in their favor, but Gable took a nasty fall to the arena floor that put The Revival right back in control.

Dash & Dawson did everything they could to put Alpha away in the first fall, whether it was bending the rules or crushing Gable with a Veg-O-Matic off the top rope. Nothing could stop Gable, and he finally tagged Jordan in. The red-hot Jordan injected some life into the match, bulldozing through The Revival and picking up the first fall by forcing Wilder to tap out to an ankle lock.

However, The Revival had targeted Jordan's leg in the first fall, which paid off shortly after the second fall started, as Scott Dawson trapped Jordan in an inverted Figure-Four Leglock. Wilder prevented Gable from breaking up the hold, leaving Jordan no choice but to tap out.

With the bout even at one fall apiece, the third fall was electric from the start. Both teams threw everything they had at each other, trying to quickly put an end to this epic contest. Dawson went back to the submission that won the second fall on Jordan, but Gable saved the day with a diving headbutt from the top rope. The bout spilled out to the apron, where Gable tried to German suplex Dawson to the arena floor. In the end, Dawson emerged from the struggle with the advantage, with Dash creeping up behind him to deliver a bone-jarring Shatter Machine on the ring apron that sealed the third fall for The Revival, giving them a 2-1 victory and ensuring that they held onto the NXT Tag Team Championship. 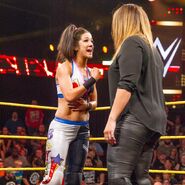 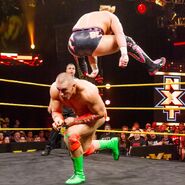 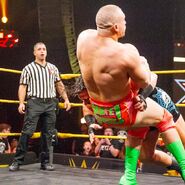 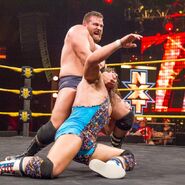