If Kassius Ohno and Hideo Itami's friendship was on thin ice before, you better believe that ice has completely cracked following their loss to Killian Dain & Alexander Wolfe.

Ohno and Itami's inexperience as a tag team – and issues communicating – would ultimately be their undoing in this bout. At times, Ohno could be heard imploring his tag team partner to tag him into the contest, only to see his pleas going ignored by Itami.

On the other side of the squared circle, SAniTy's crazed team of Dain & Wolfe worked in complete unity. The unhinged Wolfe appeared to gladly take a GTS from Itami in order to open the door for The Beast of Belfast, who then demolished Itami with a devastating running cross body .

With Ohno and Itami clearly not on the same page, will this loss add fuel to the fire that is their tumultuous friendship?

In front of his family and the NXT Universe, Roderick Strong put up a valiant effort, but ultimately fell short in his effort to become NXT Champion.

Both challenger and champion took turns dishing out their own brand of calculated offense. Strong delivered high-impact backbreakers while NXT Champion Bobby Roode homed in on his opponent's left leg. At one point, after The Glorious One slammed Strong's injured leg between the steel steps and the ring post moments prior, the referee asked the challenger if he wished to continue. Strong was having no part of that idea, and instead managed to will himself back into the contest and mount another innovative offensive attack.

As the rivals traded near falls, the bout appeared to be over after the NXT Champion hit Strong with the Glorious DDT. Yet The Messiah of the Backbreaker again somehow mustered up enough strength to kick out, and this epic title showdown continued.

With the champion positioned to hit another Glorious DDT, he instead took time to taunt Strong's family at ringside. This lit a fire under the embattled Strong, who countered Roode with a kick to the face, followed by a knee to the champion's chin. Strong looked like he was launched out of a rocket as he continued his assault into a devastating backbreaker before seeming to pick up the victory.

The crowd at Full Sail University erupted in approval at the referee's count of three. The ring announcer began to announce Strong as the new NXT Champion, until he was cut off by the referee who explained that Roode's foot was under the rope.

As Strong tried to come to grips with what just happened, the opportunistic Roode pounced, kicking his adversary to the floor right in front of his fiancé and mother. The NXT Champion then hit a Glorious DDT onto Strong outside the ring, while Strong's family watched in dismay.

Roode then threw Strong back in the ring and hit one more Glorious DDT to pick up the emotional victory, and once again walk out of Full Sail University the NXT Champion.

After nearly claiming the NXT Title, only to be defeated seconds later, will Strong get another opportunity at the Roode's glorious championship? 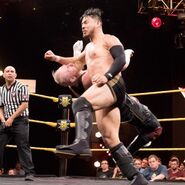 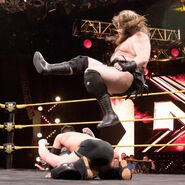 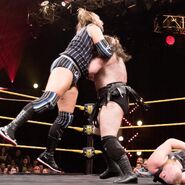 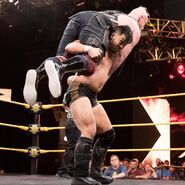 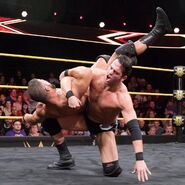 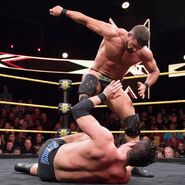