The July 5, 2004 Edition of RAW is a Professional wrestling television show of the WWE's RAW brand, which took place on July 5, 2004 at the Winnipeg Arena in Winnipeg, Manitoba, Canada.

Eugene may have been RAW General Manager for a day, but it was Evolution who ruled Monday night in Winnipeg, Manitoba.

In a Handicap Match ordered by Eric Bischoff's nephew but orchestrated by Triple H, Evolution (including honorary member Eugene) took down the team of Edge and Chris Benoit. The bout was part of The Game's master plan to wrestle the World Heavyweight Championship away from The Rabid Wolverine at Vengeance — and it seemed to be working. Evolution walked away victorious Monday, leaving Benoit unconscious and beaten in the ring. The Cerebral Assassin's mental manipulation of Eugene also paid dividends, as a conflicted Eugene broke up a Sharpshooter and set up a match-ending Pedigree with a chair shot to The Crippler's back.

Monday Night RAW opened in surreal fashion as a potpourri of Superstars got a taste of what Eugene was cooking up for his special night. Eugene's first order of business was determining Randy Orton's challenger for an Intercontinental Championship match later in the evening — usually a routine matter. Instead, Eugene whittled down the hopefuls to one through a game of musical chairs. The final two were big man Tyson Tomko and Winnipeg's own Chris Jericho. To the delight of the hometown crowd, Y2J “earned” the coveted match, sitting proudly in the sole remaining seat.

In the Intercontinental Championship battle that followed, Jericho gave Orton all he could handle. Y2J tagged the Legend Killer with a running Enziguri. Later he reversed an RKO attempt and locked Orton in the Walls of Jericho. But the looming presence of Evolution member Batista proved too distracting for Jericho, who released the submission hold to eliminate the outside threat. It was exactly the result Batista was hoping for, and he smiled coyly as Orton propped his feet on the second rope and rolled Y2J up for the three-count.

Thanks to Eugene, the animal Batista got a chance to show the world what he's made of in a match against the Big Red Monster Kane. But an enraged Matt Hardy seemed to snap, erasing the match and slamming Kane's head against the steel ring steps repeatedly. As a result, Matt Hardy was put in a "No Disqualification" match against Kane for Vengeance.

Eugene made plenty more news Monday. He took full advantage of his authority by making a Vengeance pay-per-view match — and putting himself in it! The team of “Nature Boy” Ric Flair and Eugene would go on to face World Tag Team Champions La Resistance for the PPV.

This latest chapter in the life of Ric Flair might have been utterly mystifying. The 16-time World Heavyweight Champion began the night playing musical chairs, then he was ordered to team with the uniquely talented Eugene in a pivotal match.

All the while, Flair prepared for the imminent release of his eagerly anticipated and extremely honest autobiography, “To Be the Man”. Flair's frank discussion of his career — and those with whom he's crossed paths — created a great deal of controversy. Flair also discusses his tragic youth, shedding light on some of the events that have molded the man. 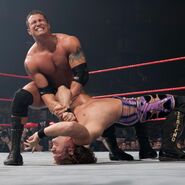 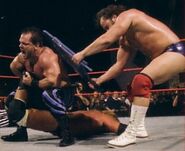 Retrieved from "https://prowrestling.fandom.com/wiki/July_5,_2004_Monday_Night_RAW_results?oldid=1558126"
Community content is available under CC-BY-SA unless otherwise noted.