The July 4, 2016 Edition of RAW is a Professional wrestling television show of the WWE's RAW brand, which took place on July 4, 2016 at Nationwide Arena in Columbus, Ohio.

On this, surely we can agree: If there is one thing that screams “America,” it's the right to stockpile enough hamburgers, hot dogs and bratwurst to cripple a Clydesdale ... and then throw it all at your friends, enemies and co-workers. The WWE locker room's Fourth of July cookout was off to a relatively peaceful start until The Vaudevillains attempted to sing and Aiden English was promptly caked in the face. The Miz's attempt to keep the peace met a similar fate when he was hit with a blast of chocolate syrup by some unidentified patriot, inciting an all-out blitzkrieg of foodstuffs from which no Superstar was safe.

"The world's largest food fight" more than lived up to its moniker: Becky Lynch and Summer Rae doused each other with condiments. Cesaro and Apollo Crews arm-wrestled to a draw as the food flew around them. Chris Jericho went ballistic when he found a Band-Aid in his beans. Big Show and Kane double-chokeslammed Heath Slater through a table of food, at which point everyone doused The One Man Band with anything they could find. Only Kevin Owens was lucky enough to escape the mealtime melee ... until he, too, was blasted in the face with a pie just when the coast seemed clear.

Rough start, America. After the Fourth of July barbecue went up in smoke, Titus O’Neil's latest bid for Rusev's U.S. Championship went the way of the Battle of Monmouth, putting the U-S-of-A at a rocky 0-2 to begin Raw's Fourth of July extravaganza. The Big Deal — who entered the ring in a “Rocky IV”-style Uncle Sam outfit — did come out strong against The Super Athlete, but a suplex over the top rope put the former WWE Tag Team Champion on his heels.

O’Neil rallied to a monstrous second wind, even hitting Clash of the Titus on The Bulgarian Brute. But Rusev reached the ropes at two, and a disheartened Titus wasn't ready for what came next: Namely, a pair of kicks to the head and an Accolade that finally forced the challenger to submit.

Last week on Raw, The Social Outcasts returned and immediately put Enzo Amore & Big Cass on blast — kind of — by insisting that they were the only ones “hard” (opposite of “sawft”) enough to topple The Realest Guys in the Room. Alas, the only thing stronger than Enzo & Cass’ in-ring prowess is their knowledge of presidential trivia: “Muscles Marinara” rattled off all 44 Commanders-in-Chief before he and Cass ran roughshod over the Outcasts, who were dressed as minutemen to mark the holiday.

Coincidentally, it only took a couple of minutes for Enzo & Cass to dispatch their foes: After Curtis Axel whiffed on a top-rope elbow drop to Enzo that sent his powdered wig flying, the 7-footer entered the fray and obliterated all his foes, finally sending Enzo crashing onto Bo Dallas with a match-ending Rocket Launcher.

About a year ago, Charlotte and Sasha Banks debuted in WWE as part of what was then dubbed the Divas Revolution. One year, a WrestleMania moment, a new title and an avalanche of “We Want Sasha” chants later, and The Boss is coming for her due. She told Charlotte as much on Raw when the two Superstars finally went face-to-face and Sasha declared, in no uncertain terms, that Charlotte's time as WWE Women's Championship is coming to an end. When Charlotte booted The Boss in the face in response, Sasha took things one step further by attempting to apply the Bank Statement. And even though Dana Brooke was able to pull the champion to safety before any real damage was done, Banks' point was made loud and clear: Tick, tock.

You can now count egg among the many types of food on The Miz's face this Fourth of July: Not only did the Intercontinental Champion get owned in the world's largest food fight, but he was feasted upon by Dean Ambrose in a Champion vs. Champion Match that featured no shortage of July 4 fireworks. Riding a wave of hometown support, Ambrose started strong and finished even stronger, rallying from a banged-up knee and a late-game surge from The A-Lister to escape the Figure-Four Leglock and hit Dirty Deeds for the win.

Ambrose wasn't out of the woods, however, as Seth Rollins arrived for his match while The Lunatic Fringe was celebrating. The Architect's presence looked, at first, like it was going to incite Ambrose into a rage, but it turns out all The Lunatic Fringe wanted to do was stick around on commentary. The Spanish commentary, no less. Now that's a swerve.

So Seth Rollins is not letting this whole Roman Reigns controversy go quietly. Nor, for that matter, is he about to let Dean Ambrose overshadow him in the lead-up to the winner-take-all Triple Threat Match at WWE Battleground: Moments after Ambrose dispatched The Miz in a Champion vs. Champion Match, Rollins scored a victory of his own over Dolph Ziggler with The Lunatic Fringe on commentary. He had to shake off a mighty impressive performance by The Showoff to do it, but do it he did, kicking out of a superkick and shaking off a Zig Zag to land the Pedigree.

Rollins saved his most savage attack, however, for the still-absent Reigns, disparaging The Big Dog in merciless fashion for his recent suspension. His insults toward Ambrose were met with a little more resistance from their target, however; The Lunatic Fringe tossed his title in Rollins’ face and delivered Dirty Deeds atop the Spanish commentary table. Qué pena.

Excuse us for the segue, but yet another former GM has thrown her hat in the race to run SmackDown Live come July 19: Vickie Guerrero, last seen shoving Stephanie McMahon in a pool full of pudding, resurfaced on Raw to talk up her own bonafides as a potential COO for the blue brand's new era. It went about as well as it did for Big Johnny and Teddy Long; security was quick to interrupt Vickie's sales pitch and escort her from the arena, kicking and screaming all the way while onetime flame Dolph Ziggler denied ever meeting her before in his life. Some things never change.

Lost in all the chaos of Raw's opening food fight was how the action got started: with Aiden English attempting to one-up R-Truth's rap by singing the Declaration of Independence. Those are fighting words (or notes) if anything ever was, so The Golden Truth and The Vaudevillains got a chance to settle their score in a match — after taking a quick shower, of course. Unfortunately for the ‘Villains, the score was settled quickly: Golden Truth was in the driver's seat and put the match to bed early, all under the watchful eye of Breezango, who were presumably mocking the looks of everyone in the ring ... or, perhaps, scouting. Or both. They're multitaskers.

That The Club jumped John Cena again was no surprise. The shocker came from who saved him. After weeks of being attacked by AJ Styles and his foot soldiers, the 15-time World Champion went and called out The Club in its entirety.

AJ Styles, Luke Gallows and Karl Anderson were more than happy to oblige, both pointing out Cena's noticeable lack of allies to even out the numbers game and declaring their intentions to beat up the solitary Superstar week after week until he drops. They commenced to doing just that, mobbing the Cenation leader until Enzo Amore & Big Cass, of all people, cut the mugging short and sent the good brothers backing up the ramp(ski). And whadaya know? Looks like Cena's new pals are sticking around for a bit.

Becky Lynch and Summer Rae comprised the Women's division portion of the world's largest food fight by dousing each other with ketchup, mustard and the like. Like The Golden Truth and The Vaudevillains, they got a chance to settle their issues in the ring, only this one had some added urgency as Becky was confirmed to face Natalya at WWE Battleground just before the bell rang. Summer, fresh off a formidable showing against Sasha Banks on SmackDown, brought the same skill to her battle against The Irish Lass Kicker. Despite taking a nasty spill, however, Maiden Ireland rallied quickly, unleashing the Dis-Arm-Her to score the win with (wait for it) relish.

How strong is the Power of Positivity? Looks like The New Day is about to find out. After two weeks of roasting The Wyatt Family, the first family of fear invited ya boys to the place where positivity goes to die: The Wyatt Family compound itself. Big E and Kofi Kingston were all smiles in accepting The New Face of Fear's invitation-bordering-on-challenge, but Xavier Woods, who turns into a shell of himself around the Wyatts, finally lost his cool and told his partners how it is: The fun and games are over, and if New Day doesn't get serious against the Wyatts, they're as good as done already.

Oh, say, can you see, a 16-Man Elimination Tag Team Match featuring America's finest taking on a regiment of international Superstars? If it's Raw's Fourth of July main event, then yes, yes you can. The final match of Independence Day Raw was technically divided along border-defined battle lines, but it turned quickly into a massive conflagration of alliances and rivalries forming both within and across the designated squadrons.

Cesaro and Jack Swagger engaged in a respectful battle between two former Real Americans, Mark Henry dispatched Kalisto with the World's Strongest Slam, and Kevin Owens got disqualified for hitting Sami Zayn, his teammate, with a chair. And so it went, until it came down to Sheamus standing alone against Zack Ryder & Big Show, and a last-minute rally by the Irishman was cut short when Show shoved him throat-first into the Rough Ryder. In the end, the Fourth of July ended as it must: with the Stars and Bars descending from the rafters, a giant standing over his fallen foes, and the WWE Universe basking in the unbridled glory of the Woo-nited States of America. 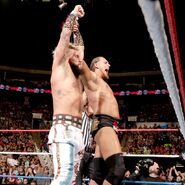 Dean Ambrose vs. The Miz

The Golden Truth vs. The Vaudevillains

The New Day responded to The Wyatt Family's invitation

Team U.S.A. vs. The Multinational Alliance

Retrieved from "https://prowrestling.fandom.com/wiki/July_4,_2016_Monday_Night_RAW_results?oldid=1558028"
Community content is available under CC-BY-SA unless otherwise noted.