August 7, 2014
The July 31, 2014 Edition of TNA iMPACT! is a Professional wrestling television show of Total Nonstop Action Wrestling. It was taped on June 26, 2014 in the Grand Ballroom in New York, New York, This episode of iMPACT featured Destination X and displayed the X-Division.

On June 24 TNA has announced that The Hardy Boys Jeff Hardy and Matt Hardy will be competing at the Destination X. On July 24 Jeff Hardy and Matt Hardy reunited and they challenged the TNA Tag Team Champions The Wolves (Davey Richards and Eddie Edwards) to put the titles on the line which they accepted. Setting up a match for the first time ever between The Wolves and The Hardys for the world tag team title match at Destination X tapings.

At the same night a series of a matches will occur to crown the new x division champion as of every year TNA invite several stars to take part in this event. Stars that were announced to appear : Low Ki, Homicide, Brian Cage.

On June 23 TNA confirmed on their website that the company will be returning to the six-sided ring starting at the Impact Wrestling tapings this week in New York City. 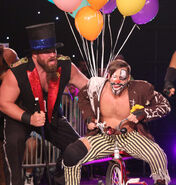