The July 3, 2017 Edition of RAW is a Professional wrestling television show of the WWE's RAW brand, which took place on July 3, 2017 at Talking Stick Resort Arena in Phoenix, Arizona. This was the final RAW before Great Balls of Fire 2017.

Don't let the tall odds (seven feet, to be exact) facing Enzo Amore this Sunday fool you: Smacktalker Skywalker still has enough force left in him to take his mic-saber to Big Cass in advance of their previously unimaginable confrontation at the first-ever WWE Great Balls of Fire pay-per-view.

Muscles Marinara opened Raw with a passionate address to the fans who fuel him and words of warning for the partner who betrayed him — and then he went and backed that warning up. In fact, Enzo repaid the seven-footer's sneak attacks with one of his own during Cass’ backstage interview, mauling his old partner and taking him down to the ground before WWE officials broke up the fight.

The Raw Women's Title picture runs on Boss Time now, and if Alexa Bliss wasn't thrilled that Sasha Banks earned the right to challenge her this Sunday by forcing Nia Jax to tap out at the end of a grueling Gauntlet Match, imagine how the champ felt this week when Banks did the same thing to her.

Granted, the victory came in a tag team match that united Banks & Bayley against Bliss & Jax, but the outcome had to be disconcerting to Little Miss Bliss all the same — especially since Jax sent Bayley to the trainer's room in the early goings by kneeing her in the head with such force that she injured herself in the process. The Boss toughed out the 2-on-1 disadvantage nonetheless, superkicking Jax in the tweaked knee and locking Bliss in the Bank Statement for a near-instant submission win.

Just when Cedric Alexander thinks he's out of the woods with Alicia Foooooox, Noam Dar keeps pulling him back in.

The Scottish Supernova cost Alexander a match on 205 Live last week in an attempt to “close the chapter” on the long-running rivalry, and when Alexander took on Dar in a rematch on Raw, he had the added satisfaction of Alicia herself being there, neck brace and all, to see Dar lose.

Granted, Dar had a golden opportunity to claim the win when Alicia confronted Cedric on the apron in the middle of the match, but The Scottish Supernova's roll-up attempt was thwarted when Alexander re-rolled the maneuver and executed the Lumbar Check to earn the victory.

Remember a couple weeks ago when Heath Slater dangled the idea of challenging The Miz for the Intercontinental Championship and then pinned him in a tag team match? Well, Heath Slater remembers. And while Raw General Manager Kurt Angle was happy to grant Dean Ambrose a title rematch at the first-ever WWE Great Balls of Fire pay-per-view following a confrontation between Miz, Ambrose and Slater on “Miz TV,” he also ruled that The A-Lister would first defend his title against The One-Man Band to determine who, exactly, The Lunatic Fringe would face.

A thoroughly unprepared Miz had to compete in his suit pants and shirt, and Slater was a house on fire for the entire bout, but The A-Lister made it out with his title intact. It took a distraction from The Miztourage to divert the ref's attention and a battle with Rhyno at ringside to divert Heath's, but the result of those two interferences was Miz planting his opponent with a devastating Skull-Crushing Finale for the win.

Ambrose, who spent the match on commentary, attempted to save Slater from further punishment, but The Lunatic Fringe succumbed to the numbers game and found himself on the receiving end of another Skull-Crushing Finale. The worst part for Ambrose isn't he beating, necessarily: It's that he now facees the daunting challenge of outwitting The A-Lister and his cohorts if he hopes to leave Sunday with the Intercontinental Title back in his possession.

Last week, Goldust finally shot his long-awaited comeback film, “The Shattered Truth,” by hiring a personal cameraman to film a protracted beating of R-Truth in place of their scheduled one-on-one match. And while The Bizarre One was perfectly content to bask in his own brilliance during a screening on Raw, Truth himself was less than impressed. In fact, Goldust's former partner slid into the ring behind him while the movie was playing, threw some popcorn in Goldust's face and sent him scrambling for cover.

Curt Hawkins was less than enthralled with the results of his impromptu audience poll last week when the WWE Universe guessed (correctly) that he would fall to Seth Rollins, and The Kingslayer wasn't about to let him take a Mulligan this week before their rematch.

Rollins interrupted Hawkins’ second poll and quickly used a knee to the face to notch his second win in as many weeks over The Prince of Queens. Following the win, The Kingslayer once again turned his fury toward Bray Wyatt. Rollins vowed to expose The Reaper of Souls as a false deity at the WWE Great Balls of Fire pay-per-view, ending his address with a direct question to his tormentor: "Are you a man? Or are you just a coward?"

Samoa Joe has never been one for talking, so it was only a matter of time before a split-screen interview with Brock Lesnar led to The Samoan Submission Machine hunting the Universal Champion throughout the arena. The Beast Incarnate riled Joe up to the point of a frothing rage by laughing off the bona fides of his No. 1 contender, and it took a small army of WWE security to restrain Joe when he finally found Brock.

Of course, this Sunday at the first-ever WWE Great Balls of Fire pay-per-view event, there'll be no such barricade to stop him, and The Beast Incarnate might not be laughing for long.

Last week's 205 Live showed that Neville may a bit more unnerved by Akira Tozawa than he'd prefer to admit, but that doesn't mean The King of the Cruiserweights is slowing down in advance of his title defense this Sunday — a fact Mustafa Ali was made painfully aware of on Raw.

Despite a spirited effort by Ali that put Neville on his heels for a good portion of the match, the WWE Cruiserweight Champion found daylight by shoving Ali off the top turnbuckle to the outside, taking the wind out of his foe's sails almost instantly.

Neville played with his food a bit after that, but he feasted all the same in the end, clotheslining Ali into oblivion and locking in the Rings of Saturn long past the point of a tapout.

Cesaro might be looking out for his own interests these days, but even he knows when to give the people what they want: Following a buzzy encounter with Finn Bálor last week, The Swiss Cyborg straight-up demanded a one-on-one match with the Irish dynamo six days before he and Sheamus defend their Raw Tag Team Championship against The Hardy Boyz in a 30-minute WWE Iron Man Match.

As the WWE Universe likely expected, Cesaro and Finn took each other to the limit while the Hardys scouted from commentary and Sheamus prowled at ringside. Elias Samson's arrival threw Bálor for a loop, and the guitarist's interference led to a brawl between all six Superstars capped by a running dropkick from Bálor that sent Cesaro flying into the barricade. Seconds later, a Coup de Grâce put this proverbial dream match to bed.

It's not unusual for Braun Strowman to demand “competition” (Read: Human sacrifice) when he's on a roll. And with Roman Reigns apparently absent from Raw due to a beating by The Monster Among Men last week, Strowman was certainly on a roll. What is unusual, however, is for a Superstar to volunteer his own protégé as Strowman's foil.

Sensing opportunity, Titus O’Neil convinced Apollo Crews to step into the proverbial meat grinder against The Monster Among Men to set an example for his daughter. Despite a career performance, Crews was defeated by Strowman, who picked up even more steam ahead of his Ambulance Match against Reigns on Sunday at the first-ever WWE Great Balls of Fire pay-per-view event.

O’Neil himself was also pulverized after attempting to protect Crews, but when Strowman tried to send Crews out of the arena in an ambulance, Reigns emerged from the driver's seat and brawled with his nemesis, eventually sending The Gift of Destruction plummeting off the stage with an earth-shaking Spear — an image that was rivaled only by the sight of Strowman rising from the ashes.

Reigns can count tonight's battle as a hard-earned victory, but clearly, it'll take much more to win the war. 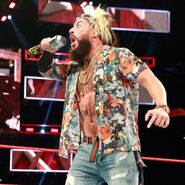 The Miz vs. Heath Slater 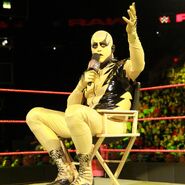 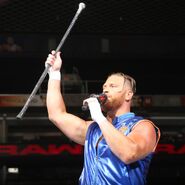 Retrieved from "https://prowrestling.fandom.com/wiki/July_3,_2017_Monday_Night_RAW_results?oldid=1557948"
Community content is available under CC-BY-SA unless otherwise noted.