The July 3, 2012 Edition of Smackdown is a Professional wrestling television show of the WWE's Smackdown brand, which was shown live at the American Bank Center in Corpus Christi, Texas. This episode entitled Super SmackDown LIVE: The Great American Bash.

Turning up his nose at America, Alberto Del Rio promised that he will win the World Heavyweight Title from Sheamus at Money in the Bank and beat him so badly that he would send him back to Ireland like a little girl.

The Mexican Aristocrat then began to torment the Corpus Christi, Texas, crowd, insisting that they were no different than Sheamus – confronting several audience members and demanding to see their “papers.”

When he tried to get one of them kicked out for not producing them, The Celtic Warrior came to the rescue – attacking his No. 1 contender and igniting a fierce brawl that spread all the way to Del Rio's car. Thanks to a disturbance by Ricardo Rodriguez, Del Rio gained the upper hand and proceeded to slam the hood of his ride down upon The Great White over and over again.

With a very unhappy Eve volunteering to keep things tidy, this week's Interim General Manager of Raw and SmackDown Theodore Long welcomed the WWE Universe, the Superstars and Divas to SuperSmackDown LIVE: The Great American Bash with a special barbecue celebration. When Santino Marella – whose Cobra was dressed up as Uncle Sam – couldn't light the grill, The Big Red Monster Kane raised and lowered his arms to set the party ablaze.

Later during the barbecue, after Zack Ryder and the rest of the party goers booed Heath Slater away for his horrible singing, Long Island Iced-Z cued in Brodus Clay and The Funkadactyls. This prompted an all-out Funkasaurus dance party.

In a match of retribution made by this week's Interim General Manager Teddy Long, his ex-girlfriend Aksana and her beau Antonio Cesaro were forced to take on Divas Champion Layla and The Great Khali. Despite the spark that clearly existed between the controversial couple, it was their formidable foes that would bring the fireworks in the end.

After Khali threw Cesaro from the ring with giant force, the English-born champion overcame Aksana with the devastating Lay-out neckbreaker.

Following the action, The Punjabi Playboy and his lovely tag team partner celebrated with a dance.

Last week, Cody Rhodes lodged an official protest – claiming that when he and David Otunga lost the World Heavyweight Championship Contract Money in the Bank Qualifying Tag Team Match, he was not the one pinned.

On SuperSmackDown LIVE, Rhodes confronted Teddy Long, just as the temporary head of SmackDown was trying to deal with the Sheamus situation. After the second-generation Superstar revealed that the WWE Board of Directors had given him another qualifying opportunity and demanded action, Teddy informed him that the Board had given him the right to pick the opponent. He determined that Cody would face someone who's already qualified for Money in the Bank – Intercontinental Champion Christian.

With the championship contract in question hanging high about the ring, the long-standing rivals engaged in another fierce showdown. And after escaping Captain Charisma's Killswitch in the final moments, the determined Rhodes hit the Cross Rhodes for the victory – earning his chance at the World Heavyweight Title Contract at Money in the Bank.

In his continued quest to prove his elite abilities, Dolph Ziggler captured another opportunity at greatness, overcoming Alex Riley in a World Heavyweight Championship Contract Money in the Bank Qualifying Match. Despite several near pins by the determined A-Ry, in the end, The Showoff would execute a fierce Zig Zag to seal his opponent's fate.

Week after week, the eccentric AJ has shocked and confused the WWE Universe with her off-the-wall actions in the direction of WWE Champion CM Punk and Daniel Bryan. On Monday's Raw SuperShow, she took things to the next level. For a moment, it seemed as if the puzzling beauty was going to hurl herself off the ring ropes and onto a table that she set up at ringside. Instead, when Punk got in her way, AJ kissed him, distracting The Second City Saint long enough to throw him backward, onto Bryan and through the table. Then, as Raw went off the air, she began chanting “Yes!”

One day later, during The Great American Bash, Michael Cole stepped through the ropes and confronted AJ, looking to get some real answers to what she was thinking with her latest episode. When he questioned her being named Special Guest Referee in the WWE Title Match at Money in the Bank and even seemed to be putting the moves on her – both Punk and Bryan emerged.

While both Superstars agreed that the situation had nothing to do with Cole, kicking him out of the ring, that's where the consensus ended. Though they both addressed AJ at first, they soon began to argue with each other over the motivation of their respective “worry” for the Diva in-question.

Then, after leaving both competitors in a sea of confusion by making out with both of them, the perplexing beauty just smiled and once again skipped away.

Nothing could have spelled Independence Day more than when Sgt. Slaughter and “Hacksaw” Jim Duggan joined United States Champion Santino Marella in an explosive Six-Man Tag Team Match. And in the true patriotic fashion of The Great American Bash, the trio let the fireworks fly, culminating in Santino's Cobra victory over Hunico.

After Curt Hawkins lost the coin toss to Tyler Reks, he had the misfortune of becoming Ryback's victim. The intense competitor ripped through the former WWE Tag Team Champion, finishing him off with Shell Shocked.

Because of an earlier injury at the hands of his Money in the Bank No. 1 contender Alberto Del Rio, the WWE Universe learned that World Heavyweight Champion Sheamus was not able to compete in the main event 20-Man Battle Royal that would determine next week's SmackDown Interim GM.

With WWE's top talent, including WWE Champion CM Punk, Big Show, John Cena, Kane, Cody Rhodes, Intercontinental Champion Christian, Daniel Bryan, Dolph Ziggler and The Mexican Aristocrat himself, it had the potential to be the greatest Battle Royal of all time from the opening bell. Among such an elite group of competitors, even gigantic athletes like Brodus Clay and The Great Khali were destined to be eliminated in the blink of an eye.

In the final moments, after Kane eliminated both Big Show and Ziggler with an explosive boot, he turned his wrath on his final opponent, Zack Ryder. After escaping the chokeslam, however, the heroic Long Island Iced-Z suddenly dropped the top rope, sending his monstrous adversary sailing to the ringside floor to shock the WWE Universe to its very core.

As a result of his earth-shattering triumph, Zack Ryder will run SmackDown next week as the latest Interim General Manager!

Del Rio viciously slammed Sheamus with the hood of his car 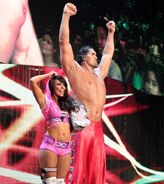 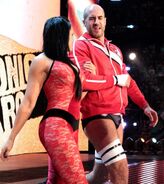 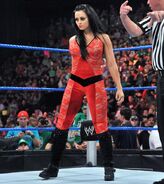 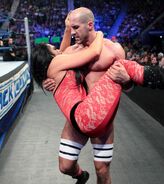 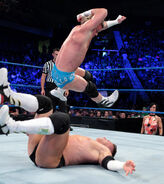 Cole interviewed AJ about her actions on Raw SuperShow 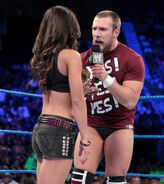 Retrieved from "https://prowrestling.fandom.com/wiki/July_3,_2012_Smackdown_results?oldid=1557890"
Community content is available under CC-BY-SA unless otherwise noted.