The July 29, 2011 Edition of Smackdown is a Professional wrestling television show of the WWE's Smackdown brand, which took place on July 26, 2011 at the Wells Fargo Center in Philadelphia, Pennsylvania.

Following his first State of the WWE Address on Monday Night Raw, Triple H journeyed to SmackDown. He immediately addressed the WWE Championship situation on Raw, acknowledging that Punk has been re-signed and that there are, in fact, two WWE Champions – The Second City Saint and John Cena. He vowed to make a decision on how to handle this problem this Monday night on Raw.

World Heavyweight Champion Christian interrupted Triple H, assuming the new man in charge would want to establish “a closer, working relationship” with him. However, taking the interruption as “a slap in the face,” Triple H declared that Christian will put his title on the line at SummerSlam against Randy Orton in a No Holds Barred Match.

Soon after Raw Superstar R-Truth interrupted as well – proclaiming himself a “man of action” – Triple H decided to provide some for both he and Christian. To the delight of the WWE Universe, he decreed that R-Truth would face Randy Orton and Christian would take on John Morrison.

With his neck still clearly not 100 percent, John Morrison came to SmackDown to battle Christian. However, seconds after avoiding The Guru of Greatness’ Starship Pain, the World Heavyweight Champion took advantage of his foe's lingering injury. Catapulting Morrison's neck off the top rope, the crafty champion claimed victory with the Killswitch.

Making it clear that he came to the United States and WWE to make money, Wade Barrett said that he is returning to basics, proclaiming that greed is overrated. However, when he began to bad mouth Daniel Bryan, Mr. Money in the Bank took exception. Barrett struck the determined Superstar and began to berate him. But, Bryan quickly turned the tables, cinching in the LeBell Lock on the English grappler.

After Alicia Fox avoided an aerial attack from SmackDown's “spitfire” AJ, the dangerous Diva executed a brutal scissors kick for the win. But, which of WWE's battling beauties will reign supreme this Monday on Raw when the Divas of WWE compete in a Battle Royal to determine the No. 1 contender to Kelly Kelly's Divas Championship?

With no Superstars apparently willing to take on the destructive Mark Henry, Zack Ryder – SmackDown GM Theodore Long's new Assistant – promised to get him an opponent. This ultimately came in the form of a local athlete, half Henry's size.

Decimating his outmatched foe, The World's Strongest Man opted to continue his assault after the bell. Moments after Teddy Long rushed to the ring to try and stop the madness, Sheamus emerged. Provoking the furious Henry to charge toward him with a humiliating slap, Sheamus dropped the rope at the last moment, sending the subject of his ridicule crashing to the ringside floor. The massive Superstar tried to get back in the ring, but was promptly stopped by the chair-wielding Irish brawler.

Despite the fact that The Usos scored a non-title match victory over McGillicutty & Otunga on "WWE Superstars," they failed to overcome the WWE Tag Team Champions when the titles were on the line. With McGillicutty in trouble, Otunga threw a war torn Jimmy Uso into the ring. This distracted the referee long enough for Otunga to hurl the legal man Jey Uso off the top rope, paving the way for the recovering McGillicutty to hit Jey with the neckbreaker for the three-count.

Ezekiel Jackson showed the courage and determination of a true Intercontinental Champion, taking on both Cody Rhodes & Ted DiBiase – at the urging of the newly appointed Assistant to the SmackDown Manager, Zack Ryder. But, when The Personification of Domination slammed his shoulder into the steel ring post, the bitter Rhodes took advantage, triumphing over his prey with the Cross Rhodes.

When the observing World Heavyweight Champion Christian jumped up on the ring apron to disrupt SmackDown's main event, R-Truth used the distraction to hit Randy Orton with a water bottle. This infuriated WWE's Apex Predator, who attacked his opponent with a chair and forced the referee to call for the bell.

Despite the fact that he had lost the match by disqualification, The Viper sent a powerful message to both R-Truth and his lurking SummerSlam opponent. After hitting R-Truth with a monitor, Orton blasted him with an RKO onto the announce table, not once but twice. 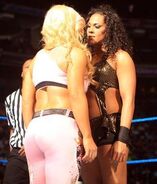 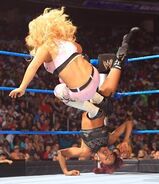 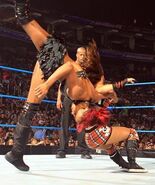 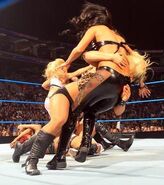 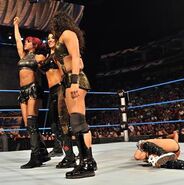 Retrieved from "https://prowrestling.fandom.com/wiki/July_29,_2011_Smackdown_results?oldid=1557806"
Community content is available under CC-BY-SA unless otherwise noted.