The July 27, 2012 Edition of Smackdown is a Professional wrestling television show of the WWE's Smackdown brand, which took place on July 24, 2012 at the Sprint Center in Kansas City, Missouri.

In the wake of the historic celebration that was Raw 1,000, there was no slowing down on Friday Night SmackDown, as four former World Champions clashed in an explosive, high-stakes free-for-all to determine the No. 1 contender to The Great White's illustrious title.

The self-professed “new face of the Intercontinental Championship,” The Miz, started off the best show on Friday night by addressing the WWE Universe. Following his title victory over Christian Monday at Raw 1,000, the smug Awesome One taunted Christian's peeps for voting for the illustrious championship gold to be contested through Twitter, Tout and Facebook — since that was what made his triumph over their champion possible.

Christian's music hit the speakers and Captain Charisma interrupted, immediately invoking his rematch clause, right then and there.

An intense, high-flying battle unfolded in the ring, on the apron and all around ringside, as the evenly matched competitors exchanged the advantage and near pinfalls, laying it all on the line for the prestigious title.

In the crucial final moments, Miz took advantage of the referee being momentarily out of position and gouged Christian's eye with his thumb. With the wily veteran's guard down, Miz grabbed Christian's tights and rolled him up for the quick pin and his first successful Intercontinental Title defense.

The brawling behemoth known as Ryback looked to continue his reign of in-ring destruction against Jinder Mahal. To the surprise of the WWE Universe, however, Mahal took the fight right to his intimidating adversary, allowing the Punjabi Superstar to fare better than any of Ryback's previous opponents and even to get in a few blows of his own.

But when Mahal went for the Camel Clutch, Ryback powered out of the submission with incredible strength and turned the tables, declaring “My turn!”

However, before the human wrecking ball could add another victim to his list, Mahal slid under the ropes and walked up the ramp, leaving the referee no choice but to deliver the 10-count. With unfinished business between the two, will Mahal dare disturb another of Ryback's “feeding times”?

Before a quartet of Superstars would enter the ring for SmackDown's main event Fatal 4-Way Match to become Sheamus’ No. 1 contender, the World Heavyweight Champion would take on Cody Rhodes and remind those challengers just what they could be getting themselves into.

In the midst of a fierce match between The Great White and the determined Rhodes, Mr. Money in the Bank, Dolph Ziggler, journeyed to ringside, carrying his coveted World Heavyweight Title contract along with him. Accompanied by his manager Vickie Guerrero, The Showoff intently watched the action in the ring.

After Rhodes battered Sheamus’ weakened shoulder, The Celtic Warrior miraculously kicked out of his opponents earth-shattering Disaster Kick. The Great White then turned the tables, hitting White Noise to set up a searing Brogue Kick for the victory.

Following the match, Ziggler looked ready to cash in his contract, but decided at the last second not to enter the ring. Then, out of nowhere, Chris Jericho, wearing Ziggler's signature pink T-shirt, ran out and tossed The Showoff through the ropes and right into a devastating Brogue Kick. As the smoke cleared, the first-ever Undisputed WWE Champion nailed Ziggler with an emphatic Codebreaker, delivering another strong statement in response to Ziggler's taunts on Raw on July 16.

After a good luck kiss from Aksana, the powerful Cesaro went right after the United States Champion. Santino persevered and managed to gain the upper hand, and the Cobra made an appearance. But Cesaro avoided the serpentine strike and defeated Santino with an earth-shattering slam.

With a distinctly European style, great in-ring moves and the beautiful Aksana by his side, Cesaro looks destined for great success in WWE. As Michael Cole suggested, a United States Championship Match could be in the Swiss-born big man's near future.

After receiving a beating from D-Generation X on Monday's Raw 1,000, Damien Sandow looked to reclaim some dignity with a brutal and relentless battering of Yoshi Tatsu.

From the opening bell, “The Intellectual Savior of the Masses” aggressively swarmed the Japanese Superstar. Showing nothing but disdain for Tatsu, Sandow kneed, punched and slammed his way to a quick and impressive victory.

After redeeming himself, Sandow addressed the “repulsive, ruffian wretches” who make up the WWE Universe, declaring himself their martyr for the thrashing he suffered at the hands of DX. Then, like DX, he shared his two signature words: “You’re welcome.”

At the height of the explosive free-for-all, Daniel Bryan appeared on the brink of victory when he snatched the “Yes!” Lock on Del Rio. However, Kane caught The Mexican Aristocrat's arm before he could tap.

With The Big Red Monster eventually taken out of the action, Mysterio hit a 619 on both Bryan and Del Rio and appeared bound for the win. But as he went for the pin on Bryan, Del Rio's personal ring announcer, Ricardo Rodriguez, grabbed his leg and pulled him out of the ring. This allowed, Del Rio to leap onto the fallen Bryan and steal the pinfall to become the new No. 1 contender to Sheamus’ World Title.

The monumental win put Del Rio back on the road to his self-professed destiny. But The Mexican Aristocrat may have his hands full with The Great White, who has looked all but unstoppable as World Heavyweight Champion. 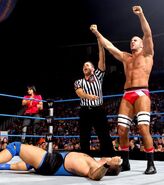 Retrieved from "https://prowrestling.fandom.com/wiki/July_27,_2012_Smackdown_results?oldid=1557791"
Community content is available under CC-BY-SA unless otherwise noted.