The July 26, 2004 Edition of RAW is a Professional wrestling television show of the WWE's RAW brand, which took place on July 26, 2004 at the Mellon Arena in Pittsburgh, Pennsylvania.

In a true test of endurance Monday night, "The Rabid Wolverine" Chris Benoit, willed out the win.

As the epic 60-minute Iron Man Match wore on, fatigue set in. The conditions made Triple H especially vulnerable to Chris Benoit's submission arsenal. With the World Heavyweight Champion down 3-1 in falls with 15 minutes remaining, Benoit showed why he's called The Crippler: First, he forced The Game to tap to the Sharpshooter after a long, grueling fight for survival. Then, he reversed Triple H's attack into the Crossface. The match-tying tap came quick this time, proving how exhausted and debilitated The Game had become.

Seeing a sure-win slipping away and the match tied at 3, the rest of Evolution made its way to ringside. Soon after, Benoit was bloodied and battered at Batista's hands. But little did they expect Eugene to emerge from the crowd and single-handedly reverse the main-event's course. In his first appearance since taking his own beating at the hands of Evolution, Eugene cleaned house, then whacked Triple H with a steel chair. He left the ring with 1:38 remaining and the table set for Benoit, but there was no referee. So, Eugene lifted an unconscious official onto the ring apron, who managed a three-count with only six seconds remaining. The clock ticked away, giving Benoit the momentous 4-3 decision. And as devastating as the loss was to The Cerebral Assassin, his focus after the match was squarely on the man who cost him the World Heavyweight Championship, Eugene.

With all the attention on the 60-minute Iron Man Match, no one expected yet another contest with SummerSlam main-event implications. Surprising all, Raw's finest competed in a 20-man Battle Royal for the chance to face the World Heavyweight Champion at the Toronto pay-per-view.

The frenetic competition's memorable moments included Tajiri single-handedly eliminating both halves of rival La Resistance; young upstart Maven eliminating legendary Ric Flair; and Chris Jericho eliminating ally Edge. That left Legend Killer Randy Orton and Y2J as the final pairing. After a series of near misses and narrow escapes, Orton connected with an RKO while Jericho was already on the outside of the ring apron. Somehow, Jericho held on. But Orton was able to finish the job with a quick and deadly kick, sending Y2J's feet to the floor.

Just like that, an Evolution member secured his spot in SummerSlam's World Heavyweight Championship match. But it was not Triple H. It was Randy Orton.

In between the two matches was a Diva Search segment featuring Jonathan Coachman, the 9 remaining Diva Search contestants and Kamala. 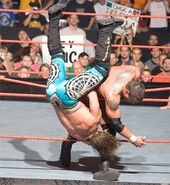 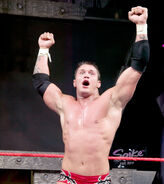 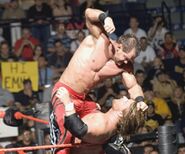 Retrieved from "https://prowrestling.fandom.com/wiki/July_26,_2004_Monday_Night_RAW_results?oldid=1557783"
Community content is available under CC-BY-SA unless otherwise noted.