The July 25, 2011 Edition of RAW is a Professional wrestling television show of the WWE's RAW brand, which took place on July 25, 2011 at Hampton Coliseum in Hampton, Virginia.

First things first. When Raw went off the air the week before, there remained unfinished business to attend to, namely determining a new WWE Champion. After eight Superstars were whittled down to two during a WWE Championship Tournament, only Rey Mysterio and The Miz remained. To kick off tonight's show, the pair clashed in a frenzied contest that eventually saw The Master of the 619 capture his first ever WWE Championship.

His title reign got off to a tumultuous start. After the match, Rey's petulant opponent, apparently unable to keep his A.D.D. in check, ambushed the freshly-minted champion before stomping off. As if Miz's outburst weren't enough, Mr. Money in the Bank, Alberto Del Rio, then appeared, hoping to cash in his contract. Before he could, however, the new champion flew over the top rope onto his attacker, which sent The Mexican Aristocrat flying and fleeing up the entrance ramp.

In addition to all the championship action at the top of the show, WWE's new Chief Operating Officer, Triple H, will assume his role as head of the company later in the program and offer a “State of the WWE Address.”

Is Vickie Guerrero Dolph Ziggler's lucky charm? If so, the poor guy may just have to keep her around. Once again, the U.S. Champion prevailed in a match against one of WWE's most agile Superstars, Evan Bourne. The aerial acrobrat proved unable to overcome Ziggler's swiftness and athleticism, succumbing to a sleeper hold.

Two blondes plus two brunettes equals one heck of a tag team match. Divas Champion Kelly Kelly teamed with the gorgeous Eve to square off against belligerent beauties Maryse & Melina. Although Kelly looks like a cheerleader, she once again proved she isn't afraid to throw down like a linebacker. The Divas Champion proved her title reign is no fluke when she secured the pin and the victory for her team.

Next week, Divas from both Raw and SmackDown will compete in a Diva Battle Royal to determine who will face Kelly Kelly at SummerSlam.

Meet the new boss. After relieving Mr. McMahon of his duties last week, Triple H took over as WWE's Chief Operating Officer or COO. This week, a sharply dressed Game addressed the WWE Universe and ushered in several major developments.

The second bombshell dropped shortly afterward: WWE Hall of Famer Jim Ross would be returning to the Raw announce desk. When The Game announced the decision, current announcer Michael Cole mouthed off in protest. As a result, Triple H arranged a match for him later in the evening against an as-yet-unnamed opponent.

While wrapping up his address, The Cerebral Assassin was interrupted by a clearly imbalanced R-Truth. After enduring the crackpot's latest batch of conspiracy theories, Triple H introduced the man Truth had put on the shelf: John Morrison. The recuperated Shaman of Sexy darted into the ring and unleashed his frustrations on Truth, leaving him immobile in the ring.

After abandoning his post earlier in the program, announcer Michael Cole was made to pay, thanks to WWE's new COO, Triple H. The Superstar collecting the toll? Zack Ryder. The Long Island Iced Z punished the egotistical talking head and gave his legion of “Bro-skis” something to cheer about. Woo! Woo! Woo! You know it!

Alberto Del Rio quickly figured out that coasting on your accomplishments is the quickest course to obscurity in WWE. In the wake of his astounding Money in the Bank victory, The Mexican Aristocrat dropped focus in an upset loss to Kofi Kingston last week. This week, however, Mr. Money in the Bank came correct, halting his slide as well as any momentum for the Dreadlock Dynamo.

The capacity crowd inside the Hampton Coliseum might want to save their ticket stubs. It was a night to remember for the WWE Universe. In an unprecedented second WWE Championship Match of the night, newly minted WWE Champion Rey Mysterio was forced to defend the title he won less than two hours earlier against one of WWE's toughest competitors, John Cena.

As the two sportsmen competed, it eventually became clear that The Cenation Commander-in-Chief would overpower Rey's agile assault and capture his ninth WWE Championship. In the carnival of celebration, however, one competitor emerged to dispute the legitimacy of Cena's reign.

CM Punk shocked the WWE faithful when, after having departed the company two weeks earlier, he surfaced inside the arena carrying his WWE Title. The audience, as well as millions at home, watched the confrontation, the tension, the body language. Which man would blink first? Which WWE Champion was the rightful heir to WWE's most coveted object? In the frenzied air of anticipation, however, there would be no determination. The Second City Savior and The Champ merely stood hoisting their respective WWE Titles skyward, as if to declare their proper place in the history books despite the protests of the other. 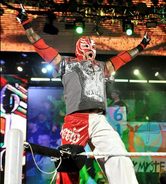 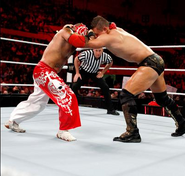 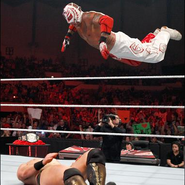 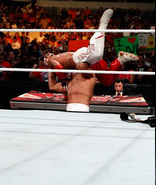 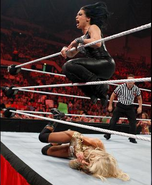 Triple H gave a “State of the WWE Address” 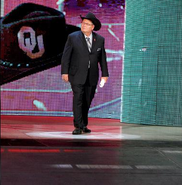 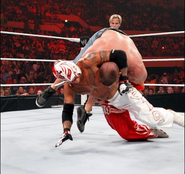 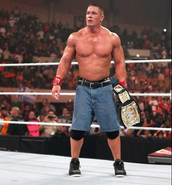 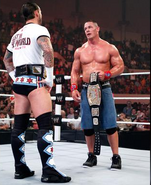 Retrieved from "https://prowrestling.fandom.com/wiki/July_25,_2011_Monday_Night_RAW_results?oldid=1630311"
Community content is available under CC-BY-SA unless otherwise noted.