The July 23, 2019 Edition of Smackdown Live is a Professional wrestling television show of the WWE's Smackdown brand which took place on July 23, 2019 at the American Airlines Arena in Miami, Florida.

After Kevin Owens issued a SummerSlam challenge to Shane McMahon via social media during Raw Reunion and indicated that he would quit WWE if he lost, “The Best in the World” kicked off SmackDown LIVE by accepting. KO then hit the scene, promising Shane that he would beat the living hell out of him at The Biggest Event of the Summer.

Owens was ready and willing to start SummerSlam early as he marched the ring ready to get a piece of the former SmackDown LIVE Commissioner, but Shane wasn’t nearly as interested. “The Best in the World” instead declared that Owens would instead take on Roman Reigns in tonight’s main event.

With a chance to potentially put himself in position for an Intercontinental Championship Match, Crews blistered the titleholder with a series of stiff kicks and even an Olympic Slam, but Nakamura kicked out at the last possible second, eventually regained control and put Crews down for three with a wicked Kinshasa.

Nakamura didn’t seem content with just claiming the 1-2-3 though, as he put the boots to Crews after the victory and dropped him with another Kinshasa at ringside before sauntering away with his championship.

The Showoff lambasted Michaels, mocking several of his recent appearances in a WWE ring. HBK didn’t mince words, retorting that more embarrassing than anything that he has done was the fact that Ziggler would only ever be known as “a second-rate Shawn Michaels wannabe.” The Showoff continued to bark at the WWE Hall of Famer until The Miz interjected and demanded that Dolph do something about it if he was gonna keep talking about how “it should have been him.” It appeared that Ziggler was about to take off, but when Michaels stopped him short, The Showoff took a swing. Michaels ducked, but the punch connected with Miz. After Michaels briefly checked on The Miz, he turned back around right into a vicious superkick from The Showoff, who dashed out of the ring before Miz could get his hands on him.

The whole ordeal was blatantly disrespectful… and Ziggler seemed to revel in every single second of it.

With her SmackDown Women’s Championship opportunity against Bayley at SummerSlam fast approaching, Ember Moon looked to score a monumental victory against Charlotte Flair on the blue brand.

However, the match was over almost as soon as it started. After a few brief exchanges between Moon and Flair, Bayley arrived, distracting The Queen and allowing The Shenom to catch her off-guard with a rollup for the win. Bayley and Ember reveled in the win for a few seconds until Ember flipped the script on The Hugger and tossed her in the ring with Charlotte. A mini-melee broke out, and Ember dropped Flair and Bayley with picture-perfect Eclipses.

Advantage Ember in a BIG way.

WWE Champion Kofi Kingston hasn’t suffered many pinfall defeats since becoming WWE Champion at WrestleMania 35. However, last week, Randy Orton did indeed pin Kingston after connecting with a gnarly RKO in Six-Man Tag Team action. Because of that, and a whole litany of history between the two from years back, Kofi didn’t waste any time waiting for someone to challenge him to a title match at SummerSlam. Instead, Kingston backed up all his claims of wanting to be a true fighting champion and challenged The Viper to a WWE Title Match at The Biggest Event of Summer.

Kingston recalled their tumultuous history, telling Orton that he still reached the top of the mountain, despite all Randy did to keep him down over the years. Randy didn’t deny the WWE Champion’s claims that he used his influence to hold Kofi back, telling Kingston that he wasn’t ready for the main event then and still wasn’t ready now.

Orton was clearly already attempting to begin the mind games, but Kofi would have none of it, staying steadfast in his belief, both in himself and in his ability to dethrone The Viper at SummerSlam. The match was now official, and it appeared that The Viper would try to continue the psychological warfare as he remained at ringside for Kofi’s upcoming match with Samoa Joe.

Kofi Kingston and Samoa Joe ran it back in a WWE Extreme Rules rematch while Randy Orton kept a watchful eye at ringside.

Clearly with no love lost after their recent saga, Kingston and Joe threw down in an absolute slugfest. Joe attempted to keep Kingston grounded, but in the clutch, The Viper tried to take out Kofi with his signature RKO outta nowhere. However, the WWE Champion was ready for it, and he evaded the move, resulting in a standoff with The Apex Predator. Instead, The Samoan Submission Machine got an RKO for his troubles, which was quickly followed by a Trouble in Paradise from Kingston right to Orton’s dome piece.

The road to SummerSlam was now firmly defined and already scorching.

Finn Bálor was brutally attacked by “The Fiend” Bray Wyatt last week on Raw, and following The Fiend’s attack on WWE Hall of Famer Mick Foley last night, The Extraordinary Man made it clear tonight that what he wanted was a SummerSlam match against Wyatt.

Bray responded quickly, but not in person. Instead, Bray appeared via the TitanTron, back in the familiar confines of the Firefly Fun House alongside Mercy the Buzzard and Rambling Rabbit. An eerily jovial Wyatt praised the former Universal Champion for his bravery and accepted the challenge, but he warned Finn of the dangers of fighting The Fiend, who Wyatt called “an abomination.”

The Fiend was seemingly not present … at least, not until the end, when flickering images of the masked Superstar appeared, and it was clear that Finn would likely have to deal with Bray and The Fiend as SummerSlam approached.

Shane-O-Mac and company tried to gang up on KO and The Big Dog once they went rogue, but Reigns and Owens rallied to take out McIntyre and Elias, leaving “The Best in the World” alone to eat a Superman Punch from Roman and two Stunners from Owens.

With Shane fleeing alongside Elias and McIntyre, KO promised the WWE Universe that what they saw tonight would pale in comparison to what they would see him do to Shane at SummerSlam.

Kevin Owens and Shane McMahon agreed to a match at SummerSlam 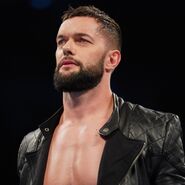 Retrieved from "https://prowrestling.fandom.com/wiki/July_23,_2019_Smackdown_results?oldid=1578235"
Community content is available under CC-BY-SA unless otherwise noted.