Both NXT Champion Samoa Joe and Rhyno deliver their offense with the same brute force that you would expect from near-300 pound athletes. Neither of these men will be confused with any of the competitors in WWE Network's Cruiserweight Classic, as both Superstars are known to throw their weight around inside the squared circle. So, when these rivals went head-to-head, it was bound to be a hard-hitting collision.

Despite standing across the ring from a very determined Man Beast, the titleholder showed no reluctance to engage in a fight. Ultimately, Joe prevented Rhyno from ever delivering his devastating Gore finisher, as the champion locked in the Coquina Clutch for the submission victory.

Before American Alpha could even make it to the ring, The Authors of Pain blindsided the tag team, unleashing a vicious assault. The mysterious monsters then strode to the squared circle with WWE Hall of Famer Paul Ellering as General Manager William Regal and officials checked in on Jason Jordan & Chad Gable.

Fearlessly, but perhaps recklessly, the former NXT Tag Team Champions got back up and charged their monstrous rivals, sending them from the ring. Despite the setback, a calm and collected Ellering ordered his behemoths back into the squared circle as the referee rang the bell to finally start the match.

Amid their heated battle, Jordan & Gable somehow managed to fight their way back, suplexing their larger foes around the ring. Unfortunately for the athletic duo, their momentum was forcefully shut down after The Authors of Pain delivered a vicious clothesline for the victory. With American Alpha getting drafted to SmackDown Live Tuesday night in the 2016 WWE Draft, it seems their impressive NXT run has ended in defeated.

Patrick Clark displayed some of the athleticism that he showed off during WWE Tough Enough, but ultimately the young competitor was overwhelmed by a focused and determined Austin Aries. “The Greatest Man That Ever Lived” locked in the Last Chancery, forcing his opponent to tap out, claiming victory in impressive fashion.

After the match, No Way Jose rushed the ring looking for retribution against Aries for attacking him last month. The spirited Superstar laid into Aries, sending him scurrying through the NXT Universe and out of sight.

Bayley didn't hesitate to deliver a fiery attack against Nia Jax. However, the powerful Jax didn't hesitate to respond with a crushing offensive display. Jax —who was drafted to Raw Tuesday night — used her size and strength advantage to overpower the former NXT Women's Champion with one move after another.

Bayley eventually fought her way back after Jax missed a spear and went straight into the steel steps at ringside. The commanding competitor would not be kept down for long, however, as she responded with a huge Jackhammer on an embattled Bayley. The explosive maneuver, shockingly, did not keep the resourceful Bayley down for the three-count. Jax set up Bayley for her signature leg drop only to decide otherwise and drag the fallen competitor in position to hit a maneuver, possibly her trademark leg drop, from the second rope. Instead, Bayley rose up to her feet, grabbed Jax in the Bayley-to-Belly Suplex and hit the finishing move from the second rope for the win. 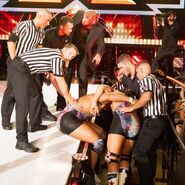 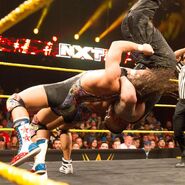 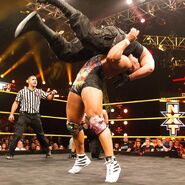 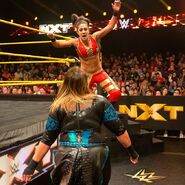 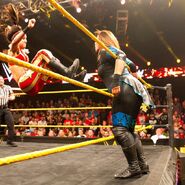 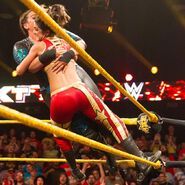