The foundation for this battle was laid weeks ago when Ruby Riot took exception to Ember Moon's remarks to reporters that she is already preparing for a title match against NXT Women's Champion Asuka. With both Superstars intent on moving up the ladder in NXT's crowded Women's division, Riot and Moon tried to end things quickly, leading to a jaw-dropping flurry of pin attempts and reversals at the outset. NXT's punk-rock pugilist made a strong showing, crushing Moon with a top-rope senton splash and a top-rope Frankensteiner.

Yet, Moon refused to be stopped. She stood up Riot with a discus elbow, felled her with a handspring forearm shiver, and broke out the Eclipse to secure the win and move one step closer to The Empress of Tomorrow.

The two scrappy, rough-and-tumble veterans threw down with glee. Burch was the first to unload a punch, socking Lorcan in the face before collapsing him with the Tower of London. Lorcan responded with a European uppercut and a series of strikes until the resilient British brawler returned fire with a lariat and a powerbomb for a two-count. Yet, Lorcan, perhaps finding inspiration in one of his early trainers, Lance Storm, rolled Burch into a single-leg Boston crab to gain the submission victory.

Burch was dignified in defeat and shook Lorcan's hand, though he also made clear that he wants to face the renowned toughie “one more time” — an invitation that Lorcan seemed happy to accept.

Looking to capitalize on his upset win against Andrade “Cien” Almas weeks ago, up-and-comer Cezar Bononi appeared confident heading into action against No Way Jose. The 6-foot-6 Bononi took Jose off his feet with a picturesque dropkick, but NXT's fiesta-loving fan-favorite didn't stay down for long. Jose charged through Bononi with a clothesline and drilled him with a pop-up punch for the pinfall.

After the match, Almas arrived at ringside, accompanied by the same woman who was seen slapping him in a parking lot. Almas entered the ring, put the boots to Bononi and dared No Way Jose to return to the ring. Jose obliged, but Almas and his unknown ally scurried away before any further physicality could ensue.

Drew McIntyre and Killian Dain were cognizant of the huge stakes at hand as they tore into each other in this week's main event. Both Superstars were defending impressive undefeated streaks, but they were also fighting for a prize even sweeter than an untainted win-loss record: The opportunity to challenge NXT Champion Bobby Roode at TakeOver: Brooklyn III.

The monstrous brawlers traded colossal hits, punctuated by the 300-pound Dain dropping McIntyre from the sky with a fisherman superplex. McIntyre forged ahead and scored with the Future Shock DDT, only for the SAnitY big man to kick out at one. McIntyre lit up Dain with the Claymore Kick, but Dain shook off the strike and began sitting up before a pin could even be attempted. Left with no other option, McIntyre fired off a second Claymore Kick, this time dropping The Beast of Belfast for the three-count.

With an NXT Championship Match now in reach, McIntyre didn't have interest in basking in his victory. Instead, he stared into the camera and addressed the champion: “I’m coming for you and your bloody title.” 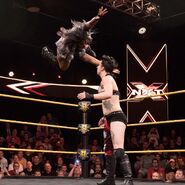 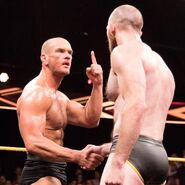 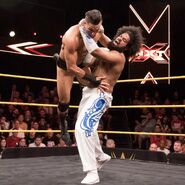 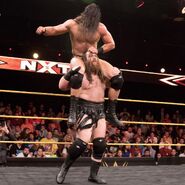