The July 18, 2017 Edition of Smackdown Live is a Professional wrestling television show of the WWE's Smackdown brand, which took place on July 18, 2017 at Legacy Arena at The Birmingham-Jefferson Convention Complex in Birmingham, Alabama.

Fulfilling his promise from one week ago, WWE Champion Jinder Mahal brought the dreaded Punjabi Prison to SmackDown LIVE. Flanked by The Singh Brothers, The Modern-Day Maharaja stood poised as Samir & Sunil explained the rules of the Punjabi Prison Match to the WWE Universe. Mahal reasserted his proclamation that he would destroy Randy Orton within the structure this Sunday at WWE Battleground.

Never one to take a verbal lashing lightly, Orton arrived on the scene, taking in the prison and slowly climbing the imposing structure. The Apex Predator stated his intentions to end Mahal's days as WWE Champion, adding he has nothing to lose and reminding Mahal that he has the weight of 1.3 billion people on his back.

The white-hot battle for tag team supremacy between The New Day and The Usos raged on this week, as Jimmy Uso clashed with Kofi Kingston in lightning-quick singles action ahead of the SmackDown Tag Team Championship Match between the two squadrons this Sunday at WWE Battleground.

In the heat of the pulse-pounding bout, Jey Uso attempted to assist his brother, but Big E and Xavier Woods cut him off at the pass. Feeling good vibes, Kofi landed a crossbody, but Jimmy used Kingston's momentum against him, rolling through to score the three-count.

Several weeks of interruptions and backstage altercations created palpable tension that finally reached its boiling point when Mike Kanellis, who smashed a vase over Sami Zayn's back the week prior, made his SmackDown LIVE debut against Zayn.

After Maria hopped into the ring to prevent Zayn from downing her husband with a Helluva Kick, Mike capitalized on the distraction and snagged the victory with a wicked right hand and an incredibly impressive maneuver, once again forcing Zayn to feel the “power of love.”

With his increasingly personal Flag Match against Rusev at WWE Battleground just five days away, a passionate John Cena spoke openly with the WWE Universe about what is at stake this Sunday.

The 16-time World Champion waxed poetic on what the United States means to him, then triumphantly raised the American flag above his head. However, the moment of patriotism was cut short when The Bulgarian Brute viciously attacked him, making a major statement ahead of Sunday.

After trapping his longtime nemesis in the Accolade, Rusev added the finishing touches by grabbing the Bulgarian flag from the pole, waving it proudly and planting it into the stand on the stage. If Rusev repeats the feat this Sunday, he will claim a monumental victory over The Cenation Leader.

After Becky Lynch and Charlotte Flair both attempted to get a singles match with Lana, SmackDown LIVE Commissioner Shane McMahon instead opted to put The Irish Lass Kicker and The Queen into a one-on-one bout against each other with an opportunity to build momentum for the Fatal 5-Way Elimination Match at WWE Battleground that will determine who will go on to challenge for the SmackDown Women's Title at SummerSlam.

Becky locked in her excruciating Dis-Arm-Her and tenaciously prevented several counter attempts by Flair, leaving The Queen with no alternative but to submit. The two Superstars shook hands after their edge-of-your-seat thriller, but Lana, Natalya and Tamina teamed up to attack Becky and Charlotte. The alliance would be short-lived, however, as Natalya began mixing it up with Tamina and Lana. After several high-impact collisions left Natalya down, Tamina exited the ring on her own accord, and Lana was the last Superstar standing in the ring.

With the United States Championship Match between AJ Styles and Kevin Owens and the grudge match pitting Shinsuke Nakamura against Baron Corbin at WWE Battleground a mere five days away, the four Superstars paired up and squared off in SmackDown LIVE's colossal main event.

Action was off the charts before Nakamura even completed his entrance, as Corbin savagely blindsided his opponent, but WWE's Rockstar sensed it and began brawling with The Lone Wolf. Owens exploded onto the stage and joined in on Corbin's assault, but Styles rushed from the ring to Nakamura's aid, resulting in a standoff prior to the opening bell.

From there, the high-stakes tag team contest saw several bursts of momentum, but a crafty KO secured a blind tag while The Phenomenal One was setting up Corbin for a Styles Clash. With his opponent unaware of the tag, The Prizefighter dropped Styles with a vicious superkick and followed up with a bone-jarring Pop-up Powerbomb to earn the victory. 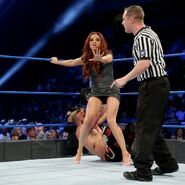 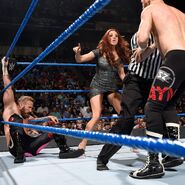 Retrieved from "https://prowrestling.fandom.com/wiki/July_18,_2017_Smackdown_results?oldid=1557734"
Community content is available under CC-BY-SA unless otherwise noted.