The July 17, 2017 Edition of RAW is a Professional wrestling television show of the WWE's RAW brand, which took place on July 17, 2017 at Bridgestone Arena in Nashville, Tennessee.

Even after rescuing The Kingslayer from The Miz & The Miztourage last week, The Lunatic Fringe assured his former "brother" that Rollins was simply in the vicinity of his intended target — Miz himself — and his distrust of the former Authority man hasn't dimmed one bit since Rollins disintegrated The Hounds of Justice three years ago.

Looking to finally put the past in the past, The Architect offered an unprecedented apology to Ambrose and even a free crack with a steel chair, but The Lunatic Fringe couldn't bring himself to carry out the attack, opting instead to toss his chair from the ring. Miz and The Miztourage had no such qualms, however, surrounding the ring and picking Rollins and Ambrose apart with steel chairs of their own. The numbers game strikes again, but as it turns out, Ambrose and Rollins are OK with that.

When Raw General Manager Kurt Angle offered them a match against any two Miztourage members next week, Ambrose suggested a 2-on-3 Handicap Match against all of them instead. A full-on reunion might not be in the cards, but maybe, just maybe, these two old rivals can make the WWE Universe believe again all the same.

Teaming with Gentleman Jack Gallagher against Gulak & The Brian Kendrick, who's had his own issues with the Gentleman of late, Ali took advantage of Gallagher tossing Gulak from the ring to seal the deal against Kendrick, battling him into the corner and executing his patented, gravity-defying Inverted 450 Splash.

So, Enzo Amore got annihilated by Big Cass at WWE Great Balls of Fire. As Ol’ Blue Eyes would say, “that’s life.” But Muscles Marinara was back in full form this week on Raw, throwing seven feet of shade in Cass’ direction over his former partner's ill-fated standoff with Big Show last week.

Cass arrived to offer a retort, at which point Show himself appeared on the scene for another go with Cass while Enzo posted up in the crowd to watch.

Another titanic battle ensued among the big men, but this time around, Big Cass got the last word, beating Show down to the mat and taking out Enzo with a big boot when he tried to intervene.

A good coach knows when to make an unpopular call. That doesn't mean the player has to like it.

Ariya Daivari ruthlessly targeted Akira Tozawa's injured shoulder in a match on Raw that stemmed from a backstage confrontation, and it got to the point that even The Stamina Monster's burning heart couldn't compensate for the shortcomings of his body.

Apparently fearing for his client's safety, Titus O’Neil at ringside got the attention of the referee and successfully petitioned for the match to be stopped, leading to an automatic win for The Persian Lion — much to the dismay of Tozawa, who left the ring without his benefactor while Daivari dedicated his win to the Iranian Olympic gold medalist wrestler Hassan Yazdani in his native language. Tozawa did seem to accept Titus' post-match apology, with one big caveat: That he organize a rematch on tomorrow's 205 Live.

For weeks, Raw General Manager Kurt Angle has been consumed by a mysterious personal matter that he believed was a threat to destroy both his career and his family. On Raw, however, an emotional Angle revealed that he had the complete support of both his family and WWE in finally revealing his secret.

And that secret was that Angle's former college girlfriend had, unbeknownst to him, given birth to a son who had been put up for closed adoption, raised with “American values” and even followed through on his dream of becoming a WWE Superstar: Jason Jordan of former SmackDown Tag Team Champions American Alpha.

Having been formally introduced by Angle as the newest member of Raw, Jordan came down to the ring and shared an emotional embrace with The Olympic Hero as father and son.

The Revival's long-awaited return last week came at the expense of The Hardy Boyz, who they claimed had failed to show them the proper respect the first time they met. And while Matt & Jeff may not like Dash & Dawson by any stretch of the imagination, it's hard to imagine they’d ever doubt their skills after what went down on Raw.

The former Raw and NXT Tag Team Champions went head-to-head in a hard-hitting match that pitted the Hardys’ flips against The Revival's fists, eventually coming down to the wire with Dash Wilder saving Scott Dawson from several of Jeff Hardy's signature attacks. When The Charismatic Enigma rallied to set up the Swanton Bomb, Wilder shoved him off the top turnbuckle and Dawson capitalized, grabbing a handful of Hardy's pants to neutralize him for an ill-gotten pin.

Going into Raw, Roman Reigns and Samoa Joe were set to battle for the ultimate opportunity: The chance to challenge Brock Lesnar for the Universal Championship at SummerSlam. Coming out of Raw, a certain Superstar made sure the answer wasn't quite so simple.

The Big Dog and The Samoan Submission Machine pushed each other to the limit and then some in their main-event clash, but moments after Reigns landed a very close two-count on Joe, Braun Strowman stormed into the arena and attacked both heavyweights, instigating a brawl that led the ref to throw out the match.

A combination of a Coquina Clutch and a Superman Punch finally brought The Monster Among Men to his knees — for all of two seconds.

Strowman flattened both men with ring-shaking Running Powerslams (Reigns caught two) and scared off the small army of security sent to stop him. As to who Lesnar's challenger is, Raw General Manager Kurt Angle promised an answer next week in his exclusive post-Raw interview on WWE Network. Either way, it's clearly too soon to be thinking about a SummerSlam title opportunity when Braun Strowman isn't finished with you. 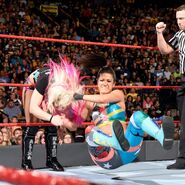 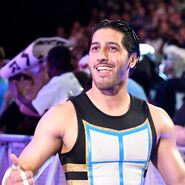 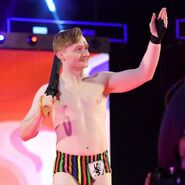 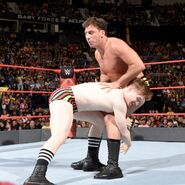 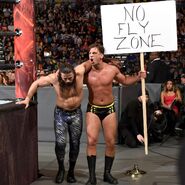 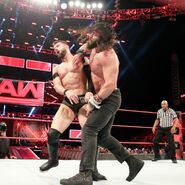 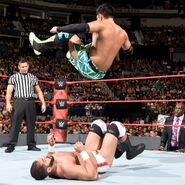 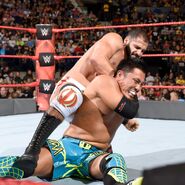 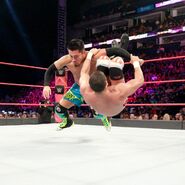 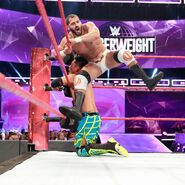 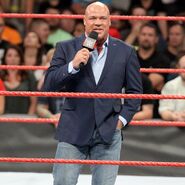 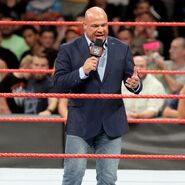 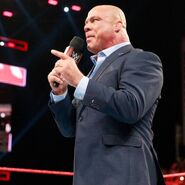 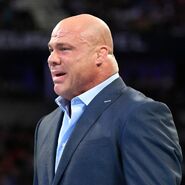 The Revival vs. The Hardy Boyz 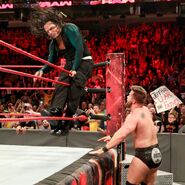 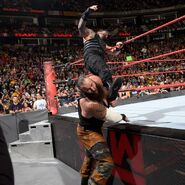 Retrieved from "https://prowrestling.fandom.com/wiki/July_17,_2017_Monday_Night_RAW_results?oldid=1557729"
Community content is available under CC-BY-SA unless otherwise noted.