July 24, 2014
The July 17, 2014 Edition of TNA iMPACT! is a Professional wrestling television show of Total Nonstop Action Wrestling. It was taped on June 25, 2014 in the Manhattan Center in New York City, New York.

Bully Ray and "The Innovator of Violence" Tommy Dreamer enter the IMPACT Zone. Bully praises NYC as the greatest wrestling city on the planet and promises tonight will take the wrestling world by storm! He vows to make good on his promise to put TNA President Dixie Carter through a table!

The crowd chants "We want tables!" Tommy Dreamer takes the mike and reminisces about a special night in 1997 – when wrestlers like Bully Ray and himself were given national exposure for the first time. He thanks fans for their continued support.

EC3 and Rhino interrupt. EC3 says Bully is only putting his Aunt D through a table over his dead body. Rhino threatens the crowd and says they should respect EC3 because he's a Carter, to which they respond, "You sold out!"

As EC3 begins to talk, the crowd chants "You can't wrestle," to which EC3 replies, "I disagree – I'm very good!" Then he refers to NYC as "The big crap-ple!"

EC3 and Bully Ray are in the ring to start. Bully, with a hot crowd behind him, keeps EC3 reeling in the corner with a series of punishing chops. He tags Tommy Dreamer. Dreamer hammers EC3 with his own series of chops before hitting a suplex. Bully and Dreamer exchange tags, until EC3 makes the tag in Rhino, who rushes into the ring and dominates.

EC3 tags back into the bout, but misses a diving attack that allows Bully Ray and Tommy Dreamer to shift the momentum. Across the ring from one another, Bully and Tommy mount a series of punches on their opponents. Rockstar Spud enters the IMPACT Zone to cause a distraction.

Following Spud's intervention, Rhino changes the complexion of the match. EC3 continues to build upon Rhino's advantage, but Dreamer is able to make the tag to Bully. Dreamer and Bully toss Rhino from the ring and double team EC3 for a two-count! Rhino attacks Bully and Dreamer and then takes his assault on Bully to the outside.

Spud hops onto the apron to provide another distraction, which EC3 uses to roll up Tommy Dreamer for the win.

Backstage, James Storm confronts and slaps Sanada. Storm says Sanada is too disciplined and that he'll end up a loser and choke artist.

Edwards and Aries are so evenly matched that before either can gain the advantage, Christy Hemme is counting down from ten and Manik enters the bout! Manik infuses the match with a substantial amount of electricity – the pace drastically quickens until Davey Richards is announced as the fourth competitor.

The Wolves work together against Manik until Aries reenters the fray. DJ Z is the fifth entrant into the match. As soon as DJ Z enters the ring, he's dropped to the canvas. Bodies are flying everywhere when Manik leaps from the turnbuckle and catches DJ Z with a hurricanrana that sends both competitors to the arena floor. Manik and DJ Z are eliminated.

Crazy Steve and Tigre Uno have joined the match when IMPACT returns from the break. Sanada is announced as the final competitor. Sanada blitzes the ring and leaves a trail of bodies in his wake.

Crazy Steve sprays Tigre Uno with silly string before eliminating him. The Wolves eliminate Crazy Steve! Sanada then reverses the charges of The Wolves and eliminates the tag team champions. Christy Hemme announces the match is now scheduled for one fall.

Aries sends Sanada flying from the ring, then drives Sanada into the barricade with a racing suicide dive! After some back and forth action, Sanada hits Aries with a springboard clothesline and a bridging pin attempt. Aries out at two!

Sanada attempts a moonsault, but Aries counters and attempts a knee breaker that Sanada reverses into a Tiger suplex! Sanada misses another attempt at his moonsault and is caught by Aries with two discuss forearms and a brainbuster!

Backstage, Bobby Roode and Eric Young are backstage talking about teaming up. They discuss MVP being their common enemy and their upcoming match against MVP and Kenny King.

Backstage, James Storm greets Sanada backstage. Storm calls him a loser then savagely attacks him before yelling, "Muta is a fraud, and so are you!"

MVP says despite having a torn meniscus, he's in the ring to compete. Kenny King says he can beat Bobby Roode and Eric Young by himself. MVP says he'll still compete, but that he'll do so "under protest."

King is able to shift the advantage and tag out to MVP. While Kenny King holds Roode's arms, MVP begins climbing into the ring. Roode escapes the hold and MVP rushes back to the outside, allowing Roode and EY to double team Kenny King.

MVP hits EY with a cheap shot, distracting the former champion long enough to be hung up on the top rope by Kenny King. King and MVP capitalize and mount a series of double-team attacks. King sets EY on the top rope, but he counters with a flying cross body, then tags Bobby Roode.

Bobby Roode locks in a cross-face on MVP! King breaks the hold. EY sends King to the outside. MVP assaults Bobby Roode with a crutch, earning the disqualification. After the match, MVP and Kenny King continue their assault on EY and Bobby Roode with the crutches.

Madison Rayne jumps on Brittany with a Thez press as the bell sounds. Madison dominates early-on with a series of clotheslines before driving Brittany face-first into several turnbuckles.

Brittany headbutts Madison, then flips to the outside. Madison hits Brittany with a baseball slide then scores a flying cross-body. Madison attempts a suplex on the ramp, but Brittany counters with a back drop.

Brittany drives Madison hard into the apron, then rolls her into the ring. Brittany attempts a pin following a side Russian leg sweep. Madison begins fighting back, but all her efforts are thwarted by Brittany – who tosses Madison to the outside.

Madison counters a DDT attempt with a suplex. Madison rolls Brittany back into the ring and is finally able to mount some offense. Madison hits Brittany in the side of the head with stiff kick, but Brittany powers out of the pin attempt.

Madison drops Brittany for the three-count.

Backstage, Dixie Carter says she's in New York city because she owns TNA and because, unlike Bully Ray, she's more bite than bark.

During Dixie's in-ring segment, dispensing negative remarks to the loyal wrestling fans in New York, Bully Ray and Tommy Dreamer arrive carrying a custom-painted "DIXIE" table. They eject the protection factor of EC3 and Rhino from the ring and lastly Spud, before moving in on Dixie. While the Carter faction fled and regrouped outside of the ring, EC3 would find himself on the receiving in of the fists of one Devon! Together with Bully Ray, Team 3D reunited and highlighted their night by sending EC3 through the table!

The crowd is vocally behind Jeff Hardy as the opening bell sounds. Lashley dominates early with a hard clothesline and a spear into the turnbuckle. As Lashley attempts another turnbuckle assault, Hardy counters, sending the champion flying across the ring.

Lashley rolls out of the ring and Jeff Hardy flies over the top rope with a cross-body. Hardy positions the steel steps – in an effort to mount some kind of offense. Lashley counters, sending Hardy crashing down shoulder and face-first onto the unforgiving steel.

Lashley whips Hardy back-first into the steps before returning the action to the ring. Lashley chokes Hardy on the middle rope and continues his in-ring dominance. Hardy fights out of a torture rack and shifts the momentum in his direction.

Hardy battles back with a series of offensive moves including a dropkick and the Whisper in the Wind. Lashley hoists Hardy up for a slam, but Hardy reverses and nails the Twist of Fate! Hardy climbs the turnbuckle and comes crashing down with a Swanton Bomb! He covers, but Lashley powers out at two.

Hardy takes the action outside and slams Lashley face-first onto the steel steps. As Lashley lies motionless on the stairs, Hardy climbs the turnbuckle and attempts a second Swanton, but Lashley moves and Hardy crashes hard on the steel!

Capitalizing on Hardy's misfortune, Lashley tosses his challenger into the ring and stalks him until tearing Hardy in half with a massive spear! 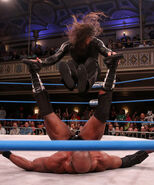