The July 16, 2019 Edition of Smackdown Live is a Professional wrestling television show of the WWE's Smackdown brand which took place on July 16, 2019 at the DCU Center in Worcester, Massachusetts.

Coming off of Kevin Owens’ iconic tirade last week, Shane McMahon held a Town Hall Meeting on SmackDown LIVE, allowing other blue brand Superstars to air any and all grievances, as long as they were “respectful.”

Superstars weren't bashful, with Roman Reigns stepping right up to the mic to inform Shane-O-Mac that nobody in the locker room respected him... to which Shane promptly replied that he would be fining The Big Dog for his controversial comments. Charlotte Flair tried to bring the convo back to a pro-Shane level, but Liv Morgan interrupted, calling The Queen a total phony in more ways than one.

Buddy Murphy chimed in saying that he would be happy to help shut-up KO for Shane, before Apollo Crews swooped in to say that he too agreed with Owens’ assessment from last week ... before Andrade & Zelina Vega interrupted to try and silence Apollo by challenging the rising Superstar to a match tonight. Elias was the next up to try and swift the Town Hall back in Shane's favor, before The New Day—and specifically WWE Champion Kofi Kingston—railed against Shane, insisting that every Superstar on SmackDown LIVE had the potential to do great things if given the opportunities. Shane-O-Mac didn't like what he was hearing though, and he called for the technicians to cut Kingston's microphone off before he could continue his blitz on Shane.

Shane abruptly called a close to the Town Hall, made a match between Aleister Black and Wild Card from Raw Cesaro and seemed generally satisfied... until he ate a Stunner from an intruding Owens (who he had banned from the arena earlier in the evening).

Shane was down, Owens fled and things were quite lively on the blue brand.

Following their show-stealing clash at WWE Extreme Rules, Aleister Black and Cesaro ran it back on the blue brand. Looking to claim a second monumental victory over The Swiss Cyborg after defeating him on Sunday, Aleister Black immediately brought the fight to his opposition, forcing Cesaro to retreat in the early goings. The King of Swing battled back with a submission-based attack, but Black refused to stay down and finished off Cesaro with a brutal Black Mass that sent Cesaro's mouthpiece flying across the ring.

After getting into a verbal tussle with Charlotte Flair during Shane McMahon's Town Hall Meeting earlier in the night, Liv Morgan looked to seize an opportunity by taking down The Queen in one-on-one competition.

“SmackDown LIV” came at Charlotte early, showing some impressive quickness that threw The Queen off her game. After slowing the pace and regaining control, Charlotte caught Liv with a ring-rattling powerbomb, and the rest was academic, as she locked Morgan in the Figure-Eight for the submission victory.

An emotional Morgan lashed out by snatching Corey Graves’ headset off his head and letting everyone know that “Charlotte was right” and the next time we saw her, she would be real.

Last week, Mandy Rose & Sonya Deville challenged Ember Moon to a tag team match if Ember could find a partner. Well, Moon not only found a partner, but a partner in the way of SmackDown Women's Champion Bayley.

Fire & Desire appeared to be undeterred by the choice though, attacking Ember & Bayley before the bell and getting the jump on them in the early goings. However, The Hugger and The Shenom immediately clicked as a unit, with Bayley taking down Deville with the Bayley-to-Belly Suplex and Moon stopping God's Greatest Creation in her tracks with a dazzling Eclipse to put Rose away for the win.

After the match, Bayley was pressed on who she wanted to defend the SmackDown Women's Title against next, and after mulling it over, Bayley made it obvious that she thought Ember would be a great choice. An ecstatic Moon belted out an enthusiastic “Hell yeah!” to the delight of the WWE Universe.

Fresh off their sixth Tag Team Championship win at WWE Extreme Rules, The New Day arrived on SmackDown LIVE ready to celebrate holding all the gold, despite this actually being time scheduled for what was supposed to be a major announcement from Daniel Bryan.

The New Day seemed to think that Bryan's news would be challenging the new champions to a rematch, which the titleholder prematurely accepted. Bryan & Rowan then hit the scene... and then left the scene before Bryan said anything at all... and then repeated that process several times as the WWE Universe and New Day anticipated what he had to say. However, Bryan dropped the mic and exited without saying a word, allowing for the arrival of Samoa Joe. Joe was looking for another opportunity at Kofi Kingston's WWE Championship despite coming up short against Kingston at WWE Extreme Rules. Before Kofi could reply though, Elias interrupted also looking for a crack at Kingston, who was soon followed by Randy Orton looking for the same.

Elias suggested a Six-Man Tag Team Match for right now, and The New Day were all about it. The Viper seemed less than interested and began to make his exit... until Kofi hit Randy with some serious insults that got him more than invested in trying to take The New Day down in an impromptu bout up next.

Fresh off the intense verbal exchange from moments prior, The New Day collided with Samoa Joe, Randy Orton and Elias in a major impromptu Six-Man Tag Team Match.

Kofi Kingston, Xavier Woods & Big E put their experience as a unit into motion from the jump, firing on all cylinders until Randy Orton blindsided Woods behind the official's back, which allowed his smashmouth unit to take firm control. Elias, Samoa Joe and Orton attempted to isolate Woods, but the temperature of the match changed when the WWE Champion finally tagged into the contest. During a wild free-for-all between all six competitors, Joe ensnared Woods in a Coquina Clutch at ringside, and The Living Truth dropped Big E with a knee to prevent the big man from freeing his partner. Elias reentered the ring, only to be met with a swift Trouble in Paradise from Kofi, but The Apex Predator immediately struck the WWE Champion with an RKO for the victory.

Joe, Elias and Orton turned in an impressive victory by taking down the trio of titleholders, but The Viper made the definitive statement at the expense of the WWE Champion.

After defeating The IIconics in Tokyo several weeks ago in a non-title match, The Kabuki Warriors of Asuka & Kairi Sane looked to follow up by dethroning The IIconics for the WWE Women's Tag Team Titles on SmackDown LIVE.

Asuka & Kairi came out the gates hot, but when Billie Kay & Peyton Royce found themselves on the outside of the ring, they refused to reenter and got themselves counted out, taking another loss to The Kabuki Warriors but retaining their titles. This, of course, did not sit well with The Kabuki Warriors, who darted out of the ring to lay a beating on Billie & Peyton, which was punctuated by an awe-inspiring InSane Elbow from The Pirate Princess.

The cathartic attack quenched their thirst for retribution, but it got them no closer to the Women's Tag Team Titles ... at least not on this night.

After their tense exchange during Shane McMahon's Town Hall Meeting earlier in the evening, Apollo Crews and Andrade went at it on the blue brand, and Andrade got the jump by attacking Crews before the bell rang. Andrade applied the pressure, allowing Crews no room to breathe, but just when it appeared that Andrade was closing in on victory, Apollo turned the tides by catching Andrade with a roll-up for what was arguably the biggest three-count of his SmackDown LIVE career.

After being blindsided by a Stunner from Kevin Owens earlier in the night, Shane-O-Mac co-signed Dolph Ziggler's idea of trying to shut up KO in a match, and Shane allowed Owens back in the building for this main event.

KO brought the heat early, but Ziggler took control while seeking retribution for Owens’ quick win on Sunday at WWE Extreme Rules. The action stopped when Shane McMahon arrived with a litany of SmackDown LIVE Superstars, seemingly ready to pounce on KO.

As the crew surrounded the ring, Owens kicked out of a Zig Zag before regrouping and dropping The Showoff with a Stunner, though Shane yanked the former Universal Champion out of the ring when he went for the cover. Owens responded by swiftly dropping Shane-O-Mac with a Stunner for the second time that night, and he bolted toward the backstage area to evade the mob.

Owens had bested Shane yet again, but “The Best In The World” promised that payback was coming KO's way as SmackDown LIVE concluded. 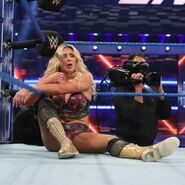 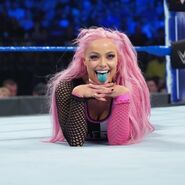 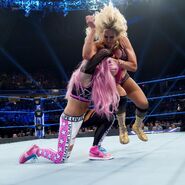 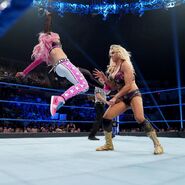 The Kabuki Warriors v The IIconics 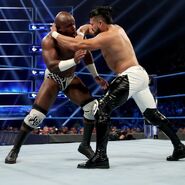 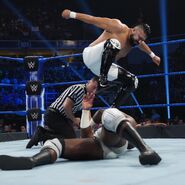 Retrieved from "https://prowrestling.fandom.com/wiki/July_16,_2019_Smackdown_results?oldid=1646097"
Community content is available under CC-BY-SA unless otherwise noted.