The July 16, 2012 Edition of RAW is a Professional wrestling television show of the WWE's RAW brand, which took place on July 16, 2012 at Mandalay Bay Casino in Las Vegas, Nevada. This was the last Raw under the label "Supershow".

On the action-packed final two-hour Raw in history, AJ accepted Daniel Bryan’s wedding proposal and John Cena announced that he will cash in his Money in the Bank championship contract against WWE Champion CM Punk on Raw's 1,000th episode this Monday at its new start time of 8/7 CT on USA Network.

In the same city where WWE Champion CM Punk delivered his blistering "pipe bomb" a little more than a year ago (MORE), The Straight Edge Superstar kicked off the final Raw before the historic 1,000th episode by declaring he has firmly proven he is the best in the world.

But inside the sold-out Mandalay Bay Casino, Big Show interrupted to offer his thoughts on how the champion’s last year has gone and claim he was inches away from winning a championship contract at Money in the Bank. As Big Show and Punk traded verbal barbs, The World’s Largest Athlete pointed out the gigantic implications of their main event match. With the very good chance Punk could get knocked out, he’d be in real jeopardy of Mr. Money in the Bank John Cena cashing in his contract.

One night after their victory at Money in the Bank against Hunico & Camacho, the WWE Tag Team Champions followed up with a title match against The Prime Time Players on Raw SuperShow. While All World Promotions owner A.W. argued with the referee, Kofi Kingston seized the moment and blasted Titus O’Neil with Trouble in Paradise, allowing R-Truth to follow-up for the win. After the bout, A.W. made it clear: he was not happy with the outcome.

While Daniel Bryan was apologizing to AJ – saying he got caught up trying to become WWE Champion – Eve interrupted with news from the WWE Board of Directors. She and a partner of her choosing would be facing AJ & Bryan in tag action later in the night.

In an impressive win, Alberto Del Rio forced Zack Ryder to tap out to his Cross Armbreaker. When Del Rio refused to release the painful maneuver, Rey Mysterio stunned the WWE Universe and charged in to attack Del Rio! As the two Superstars mixed it up, Mysterio blasted Del Rio with the 619!

The latest returning Raw legend to take on Heath Slater was Rikishi, who absolutely obliterated him! It was all downhill after a blistering kick to the face, followed by a very uncomfortable looking Stinkface. To finish off Slater, Rikishi dropped all of his crushing 400-plus-pound mass on his helpless opponent. Following the win, Jimmy and Jey Uso joined their father in a celebratory dance that would make Brodus Clay jealous.

In mixed tag action, Eve partnered with The Miz to take on AJ & Daniel Bryan. When the referee was distracted by Miz, AJ rolled up Eve for the pinfall.

After the match, Bryan poured his heart out to the diminutive Diva and outrightly admitted, “AJ, I love you.” Then, he got down on one knee, extended an engagement ring and asked, “AJ, will you marry me?”

An emotional AJ allowed Bryan to slip the ring on her finger and she said the magic word: “yes.” Then, the two embraced in a passionate kiss and lead the WWE Universe in chanting “Yes! Yes! Yes!” to their big news.

The two will be married on Raw's 1,000th episode next Monday at 8/7 CT on USA Network. But first, they will be Christian's special guests on the "Peep Show" this Friday on SmackDown on Syfy at 8/7 CT.

In his toughest challenge yet, Ryback was up against Jack Swagger, who came out of the gate with a formidable offense. After the impressive start, it looked as if Swagger could be the Superstar to hand Ryback his first loss. But it was not to be. After a monster clothesline followed by three brutal powerbombs in a row, Ryback left the The All-American American reeling. Following the impressive path of destruction, Ryback lead the WWE Universe in chanting: “Feed me more!”

With Vickie Guerrero at his side, Mr. Money in the Bank Dolph Ziggler reminded the WWE Universe that all past Money in the Bank contract holders successfully cashed in their contracts. Then as Ziggler rattled off names of Superstars who he claims he’ll be better than — including Bret Hart, “Stone Cold” Steve Austin and The Rock — Chris Jericho emerged to confront him. As Jericho remained silent, Ziggler suggested that Jericho could be losing his touch. Then without saying a single word, Jericho blasted Ziggler with a hard-hitting Codebreaker!

In a poll during the live Raw broadcast, the WWE Universe voted on which championship should be defended on the historic 1,000th episode of Raw. In a tight race, the WWE Universe chose Intercontinental Champion Christian to defend his title. Who will he face? Tune in Monday at 8/7 CT on USA Network.

From the sound of the bell, JTG offered just about zero challenge to Brodus Clay, until JTG started targeting Clay’s knee. Before JTG could mount a comeback, though, the massive Clay battled back and brutalized JTG with a headbutt followed up by sending his massive frame down onto his hapless opponent.

After pushing themselves to the limit in their respective matches one night earlier at Money in the Bank, Big Show and WWE Champion CM Punk fought tooth-and-nail in the night’s main event. As the battle waged on, it looked like The Straight Edge Superstar had Show right where he wanted when Punk launched himself onto Show with a flying elbow from the top rope. But Show came back with a wicked chokeslam that almost resulted in a three count. Next, with the referee knocked out of commission by Show, the bout ended in a disqualification and Show continued to batter the champion. But before he could inflict more damage, Mr. Money in the Bank John Cena charged in with his briefcase.

After citing Punk's 239-day reign as champion, Cena announced he would be cashing in his championship contract next week. “At Raw 1,000, with both of us fresh, we will find out who the best in the world really is,” Cena said.

Not done yet, Mr. Money in the Bank followed up on his Tout to the WWE Universe from earlier in the day. As he uttered the words “My huge announcement? …” Cena swiftly bashed Show with his metal Money in the Bank briefcase, sending him crashing to the arena floor. 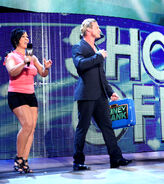 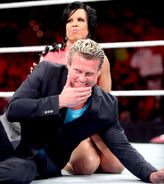 Retrieved from "https://prowrestling.fandom.com/wiki/July_16,_2012_Monday_Night_RAW_results?oldid=297466"
Community content is available under CC-BY-SA unless otherwise noted.