For the first time since successfully defending the NXT Championship against Finn Bálor at NXT TakeOver: The End..., Samoa Joe addressed the NXT Universe and the titleholder didn't pull any punches.

The intense Superstar reminded everyone that he has already “slayed The Demon” and The King of Strong Style will suffer a similar fate if he attempts to capture his title. The self-proclaimed “new face of NXT” defiantly declared that anyone hoping to get to the top must go through him. This prompted Rhyno to come out and challenge Joe right then and there. The NXT Champion thought better of getting into it with The Man Beast, instead deciding to walk away. Rhyno will get his chance to Gore his way to the top of NXT's food chain; however, as it was announced that he will face Joe next week on NXT!

You could feel the electricity in the air as Finn Bálor and Shinsuke Nakamura made their entrances for their once–in-a-lifetime showdown. This dream matchup began with a feeling out period as both seasoned competitors sized one another up with various holds.

This slower pace was a mere reintroduction for these friends; however, as the flamboyant Nakamura taunted his opponent after a rope break. The King of Strong Style's mind games have worked countless times before with previous opponents, but they didn't faze The Demon who in turn poked his adversary in the head with his trademark “Too Sweet” hand gesture. The Japanese native responded with a hard knee to midsection of the former NXT Champion, propelling the action into hyper drive.

The NXT Universe was on the edge of their seats through the entire matchup as these world renowned competitors inflicted their own personal brand of pain on one another. Nakamura punished Bálor with his vicious strikes only to have the Irish Superstar target his knee via a calculated ground game. Bálor and Nakamura threw everything they had at one another, leaving both questioning what it would take to actually keep the other one down for the three-count.

In the end, after Bálor missed the Coup de Grace, Nakamura returned with a flying knee to the face from the second rope. An energized Nakamura then delivered his Kinshasa knee strike to pick up the victory and put an exclamation point on a match that will go down as an all-time great. After their epic battle, both warriors showed the ultimate sign of respect for one another as they shook hands and bowed. With a huge victory over Bálor, is the NXT Championship next for Nakamura? And what does the future hold for Bálor after putting forth arguably his best performance in NXT to date, albeit in a losing effort? 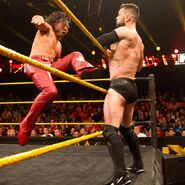 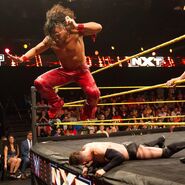 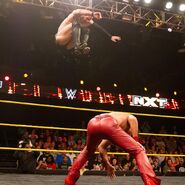 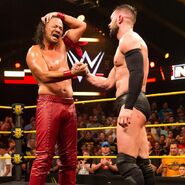