The July 13, 2012 Edition of Smackdown is a Professional wrestling television show of the WWE's Smackdown brand, which took place on July 10, 2012 at the Pepsi Center in Denver, Colorado.

It has been retitled Friday Night Zackdown because Zack Ryder won the previous week's Great American Bash, earning the right to be General Manager the following week.

With just two days to go until Money in the Bank rocks the WWE Universe, Zack Ryder took the helm of the blue brand Friday as this week's Interim General Manager, transforming SmackDown to "ZackDown." While Ryder's goal was to bring excitement to the WWE Universe, Alberto Del Rio's Friday night goal was to act as an agent of chaos, attacking World Heavyweight Champion Sheamus after The Great White's impressive victory over Chris Jericho.

The night's Interim General Manager, Zack Ryder, kicked off the Friday festivities by welcoming the WWE Universe to the very first edition of Friday Night "ZackDown"! Ryder, who won last week's 20-Man Battle Royal to become the one-night Interim GM, certainly made "ZackDown" his own, as he organized the world's largest fist pump with members of the WWE Universe in attendance and promised the greatest SmackDown ever.

But the good vibrations didn't last long, as No. 1 contender to Sheamus’ World Heavyweight Championship, Alberto Del Rio, interrupted the party atmosphere with some pointed words for both Ryder (who he called a "stupid clown") and The Great White. Del Rio promised that, after their title match at Money in the Bank, not only will he become the "real" World Champion, but he'll "rule SmackDown." Ryder's answer to Del Rio's bombastic claims was a resounding one — the Broski-in-charge showed he has some GM chops by setting up a match between Sin Cara and Del Rio!

After getting some words of encouragement from Theodore Long, who has a long and successful history in the General Manager chair himself, Ryder was "greeted" by Big Show. The angry giant disagreed with Long's assessment of Long Island Iced-Z's job performance, however, saying that Ryder is doing a terrible job and saying in no uncertain terms that he, meaning Big Show, should take over SmackDown as GM.

To make that happen, The World's Largest Athlete reared back, seemingly to level Ryder with the WMD. But The Great Khali arrived just in time, and right on cue, Ryder announced that the two giants would square off in a match later in the night!

In advance of his one-on-one bout against Primo, Darren Young entered the SmackDown arena flanked by tag team partner Titus O’Neil and Prime Time Players' promoter, A.W., who talked up his clients from the moment their entrance music hit the speaker system. Primo, one-half of the former WWE Tag Team Champions, and still harboring a major beef with A.W., looked to get back at the head of All World Promotions with a victory over one of A.W.’s prized clients.

Four of the Superstars who will compete in the Money in the Bank Ladder Match for a World Heavyweight Championship Contract Sunday all converged in tag team action on "ZackDown" as Intercontinental Champion Christian & United States Champion Santino Marella took on Dolph Ziggler & Cody Rhodes.

Christian mixed it up with old foe Cody Rhodes to kick off the match, and after a fast-paced back-and-forth exchange, Christian tagged Santino into the fray. The move incited Rhodes to loudly declare that he wanted "nothing to do with" the U.S. Champion, and the second-generation Superstar quickly tagged in Ziggler so The Showoff and The Milan Miracle could face off.

In a match made by Zack Ryder, two giants faced off in squared circle combat as The Great Khali tried to silence the enormous rage of Big Show. The gargantuan grapplers traded massive chops, and when Khali got in a good lick, he raised his hands to demonstrate his dominance. Big Show used this opportunity to put an early end to The Punjabi Playboy's celebration, connecting with a WWE Universe-shaking WMD from out of nowhere to send Khali crashing to the canvas.

Big Show overcame what could have been an enormous block in his road to Money in the Bank with the resounding victory.

Last week, after flipping a coin on SmackDown to see who would take on the destructive force that is Ryback, Curt Hawkins was decimated by the scary-strong Superstar. One week later, with Hawkins at his side, Tyler Reks took his turn at attempting to topple the undefeated scourge of SmackDown.

Reks came flying out of the gate, trying his best to make good on his promise to defeat Ryback. But a huge boot to the chest turned the bout around, and Reks was never able to fully recover. Ryback denied any attempt at offense by his overmatched opponent and a monstrous clothesline spelled the end. When the big man hit Shell Shocked on Reks, it was all over, and Ryback remains undefeated.

With just two days to go before he squares off in the Money in the Bank Ladder Match for a World Heavyweight Championship Contract, Damien Sandow dominated Justin Gabriel in one-on-one competition on "ZackDown."

The self-professed "Intellectual Savior of the Unwashed Masses" shouted insults at his opponent as he dictated the pace of the bout. Gabriel appeared to garner some offense, but Sandow stopped the attempted attack and scored an impressive pinfall victory. Will Sandow be able to build on this win as he heads into Money in the Bank?

As a result of a backstage encounter earlier in the show where Sheamus challenged Chris Jericho, Zack Ryder scheduled the bout as the night's main event! The two competitors entered the fray with different long-term objectives, but with the same short-term goal in mind. Both looked to build momentum heading into Money in the Bank, as Sheamus readied for his title defense and Jericho set his sights on the match he created, where four former champions will battle for a chance to challenge for the WWE Title.

The battle began with a slap to the face and quickly spiraled into a brawl, plain and simple. Jericho, ever the wily veteran, did what he could to set the pace of the bout right off the bat, but he couldn't escape Sheamus in the early going, as The Celtic Warrior brought his trademark power game to Friday night. It was destined to be a brutal, physical battle when Sheamus launched Jericho off the apron and out onto the SmackDown announce table. But Y2J regained control after he slammed Sheamus into the steel ring steps and launched The Great White over the announce table — a clear indication that Jericho was more than willing to do a little brawling himself. 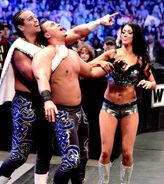 Retrieved from "https://prowrestling.fandom.com/wiki/July_13,_2012_Smackdown_results?oldid=1557645"
Community content is available under CC-BY-SA unless otherwise noted.