Aleister Black continued his undefeated streak in NXT, but not without a ferocious fight from the debuting Bobby Fish.

NXT's newest Superstar is no stranger to the grappling game, a well-respected competitor who has more than 15 years of squared-circle experience. Fish lived up to his resume, giving Black a taste of his own medicine with an array of devastating kicks.

Despite Fish's impressive offense, he couldn't put a stop to Black's overwhelming attack, which culminated with another emphatic execution of the Black Mass for the victory.

Vanessa Borne earned an opportunity to compete in the inaugural Mae Young Classic this summer on the award-winning WWE Network with an imposing victory over Jayme Hachey.

The former Phoenix Suns dancer and Arizona Cardinals cheerleader put on an athletic display in the Mae Young Classic Qualifying Match, claiming victory after drilling Hachey to the mat with an impressive spinning slam.

Borne and 31 other women will compete in WWE Network's groundbreaking tournament, which will premiere Monday, Aug. 28.

Johnny Gargano is back, and he's ready to forget about the past and focus on the future.

The former #DIY tag team member briefly talked about the shock and dismay he felt after Tommaso Ciampa's callous betrayal at TakeOver: Chicago that left him sidelined for nearly two months. For the most part, however, Gargano's address to the NXT Universe was about his future.

Gargano made it clear that he needs to get back to doing what he loves to do: competing inside the ring. The former NXT Tag Team Champion talked about competing at TakeOver: Brooklyn, but didn't speculate on a potential opponent. But, perhaps most importantly, Gargano emphasized that he needs to be Johnny Wrestling again.

The largest championship contest in the history of NXT lived up to its billing.

Weighing a combined 1,205 pounds, The Authors of Pain and Heavy Machinery battled for the NXT Tag Team Championship in a match that had the ring crew sweating bullets.

Tucker Knight & Otis Dozovic proved early that they were serious challengers to Akam & Rezar's titles, not only matching the champions’ power, but at times besting it.

Unfortunately for the eager challengers, an attempt to land their trademark Compactor was thwarted and turned into The Last Chapter on Dozovic, as the titleholders successfully retained the NXT Tag Team Championship.

Following the contest, Killian Dain, Nikki Cross and Alexander Wolfe of SAnitY appeared on stage sporting wicked smiles, as what seemed to be pages from a book dropped from the sky. What does this cryptic display mean for The Authors of Pain? 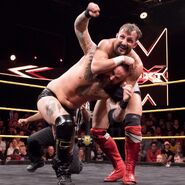 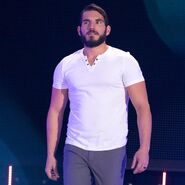 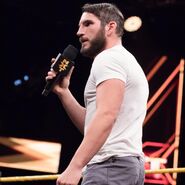 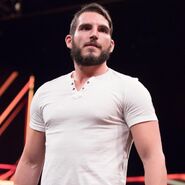 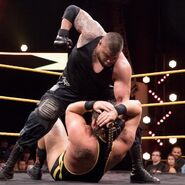