The July 11, 2014 Edition of Smackdown is a Professional wrestling television show of the WWE's Smackdown brand, which took place on July 8, 2014 at the Canadian Tire Centre in Ottawa, Ontario.

On an explosive SmackDown, two powerhouses locked horns for the first time, unlikely dance partners aligned to “tango” with a common problem and a Legend battled a Legend Killer.

Kicking off SmackDown, Lana and Rusev wasted little time throwing praise upon Russian leader Vladimir Putin, at the expense of America, Canada and The Bulgarian Brute's Friday night opponent, Roman Reigns. But, the emergence of the powerful former member of The Shield changed that agenda in a hurry, creating an instant cold war of intensity between them.

However, just when it looked as if their match might begin sooner than scheduled, The Ravishing Russian stopped her Superstar from battling on Reigns’ terms. Instead, it seemed they would need to wait for SmackDown's Main Event.

In the wake of the monumental announcement that AJ Lee will put her Divas Championship on the line against Paige at WWE Battleground, the reigning titleholder went head-to-head with Cameron. When the former Funkadactyl attempted to make an early exit, her ex-partner Naomi ran down the ramp and hurled her back to the wolves, allowing AJ to finish her off with the Shining Wizard.

As Adam Rose journeyed to take on Fandango, the stunning Summer Rae was once again among his Rosebuds. When the blonde bombshell initiated a brawl with Fandango's dance partner Layla outside the ring, however, Fandango's attempt to break up the fray ended up getting him counted-out out of the contest. When he took issue, Rose took the party to him.

After dispatching of Heath Slater & Titus O’Neil, hitting The One Man Band with the Samoan Splash off the top rope, WWE Tag Team Champions The Usos gave their impression of what will happen when they battle Luke Harper & Eric Rowan in a 2-out-of-3 Falls Match for the titles at WWE Battleground.

Anytime Chris Jericho battles long-standing rival Randy Orton on SmackDown, it is going to be a fierce showdown. But, in the case of their match on this week's SmackDown, it wouldn't happen without controversy. For at the height of the contest, the creepy tone of The Wyatt Family suddenly rang through the arena, distracting Y2J long enough for The Viper to strike with the RKO for the victory.

Following their earlier SmackDown brawl, Summer Rae would come to the ring to take on Layla with Fandango playing special guest referee. (He even received a competitive kiss from both Divas before the bell!) When Fandango decided to do more dancing than officiating, the Divas changed their tune and attacked him instead. After he managed to get out of the ring, they began to dance with each other!

Moments after Goldust overcame Curtis Axel with The Final Cut in singles action, Stardust stopped a post-match assault by throwing what looked like actual stardust in the face of Ryback.

Bo Dallas showed that he was indeed “Handi-capable,” going 14-0 in a Handicap Match by hitting the Running Bo-Dog on Diego. Then, moments after the bell, the inspirational Superstar threw El Torito into the ring and delivered a second, post-match Bo-Dog on the pint-sized Superstar.

Just when it looked like Roman Reigns was setting up to hit the Spear on the mighty Rusev in SmackDown's main event showdown, Randy Orton appeared from out of nowhere and leveled the black-clad Superstar.

While The Viper's actions forced the referee to call for the bell, it also opened the door for The Hero of the Russian Federation to attack his opponent from behind. Then, as the smoke was still clearing, Orton slithered into the ring and hit the completely war torn Reigns with the RKO. 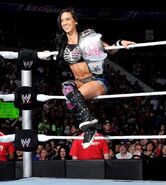 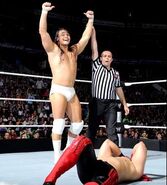 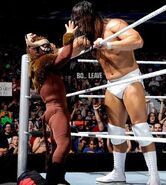 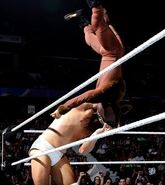 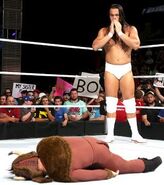 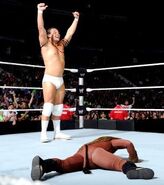 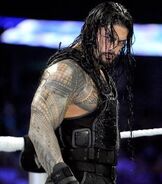 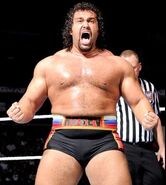 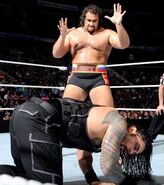 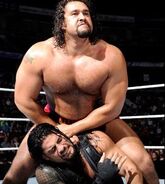 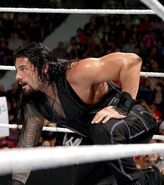 Retrieved from "https://prowrestling.fandom.com/wiki/July_11,_2014_Smackdown_results?oldid=1557636"
Community content is available under CC-BY-SA unless otherwise noted.