The January 9, 2017 Edition of RAW is a Professional wrestling television show of the WWE's RAW brand, which took place on January 9, 2017 at the Smoothie King Center in New Orleans, Louisiana.

Roman Reigns’ odds of retaining his U.S. Title went from rough to near-insurmountable over the course of about five minutes in the beginning of Raw when Braun Strowman came to the ring to exact revenge on The Big Dog for last week's double Spear. The Monster Among Men picked a hell of a time to make his move, as the bell hadn't even tolled on Reigns’ U.S. Title defense against Jeri-KO when Strowman came calling. The Gift of Destruction's assault was mercifully cut short by the arrival of Seth Rollins, who Strowman had been fighting backstage before Raw even started in earnest.

Raw Commissioner Stephanie McMahon — who was in the middle of evaluating Mick Foley when Strowman broke loose — made her entrance right as the chairs came out and managed to salvage the debacle by sanctioning the immediate matchup of Rollins vs. Strowman. She also gave Reigns till later in the night to prepare for a reset of his title defense, but that might all be for naught: Thanks to Strowman, Reigns’ handicap might have gone from metaphorical to literal.

Seth Rollins went high-risk against Braun Strowman, but, alas, high reward was in short supply at the end of the impromptu matchup that saw an impending victory slip from The Architect's fingers. Which isn't entirely to say that Seth lost the match: Rollins did so much damage to Strowman with a Frog Splash late in their matchup that, even though Rollins missed a top-rope leap to the outside and found himself hurled into the audience, The Gift of Destruction was too winded to get both himself and Rollins back into the ring to beat the 10-count. The decision did free Strowman up to wail on The Architect with a chair, but Rollins quickly countered and managed to drive Strowman off for the time being.

Last week on 205 Live, Ariya Daivari ruined Jack Gallagher's bout with Tony Nese in a most vile fashion. And as befits an Extraordinary Gentleman, Gallagher will not allow such villainy to stand. After defeateding Gulak's tag team partner Tony Nese on Raw, Gallagher took to the microphone to formally invite Daivari to a parley on tomorrow night's 205 Live, with the threat of fisticuffs should the scoundrel refuse.

The upcoming Shawn Michaels film “The Resurrection of Gavin Stone”(in theaters Jan. 20) is about as much of a feel-good story as you're likely to see in the movies, so of course HBK's promotion of the film was sullied by the presence of a cuppa’ haters. Rusev & Jinder Mahal quickly took exception to Michaels’ refusal to GC Lana into the movie, Moff Tarkin-style, which led Enzo Amore & Big Cass to run interference on behalf of ol’ HB-Shizzle.

The outcome of all this was a match between Cass and Mahal, which Rusev, aka “The Bulgarian George Clooney,” made sure never tilted too far from Mahal's favor by jaw-jacking at Don Parmesan from ringside. But after The Super Athlete got a little too involved, HBK repaid him with Sweet Chin Music on the outside, allowing Cass to finish off Mahal on his own with the East River Crossing-Empire Elbow combo.

As Neville continues his campaign to install himself as King of the Cruiserweights, Lince Dorado joins the ranks of the fallen that the furious high-flyer has assembled en route to claiming his throne. Dorado, making his first Raw appearance in some time, seemed initially to possess the right mix of skills to defeated, or at least match, Neville's own, when he stormed out of the gate after Neville refused to a pre-match handshake.

Neville quickly found his own footing — literally — with a series of boots to The Golden Lynx, grounding the masked Superstar with the blunt force of his boots and several wrenching holds to Lince's arm. The luchador attempted a last-gasp hurricanrana, but Neville impresseively reversed it into a fireman's carry facebuster and, finally, tapped Dorado out with the Rings of Saturn. Of course, Neville refused to let up on his foe after the bell, and that was when WWE Cruiserweight Champion Rich Swann, whom Neville put out of action two weeks prior, made his return and quickly got the better of his foe in an impromptu brawl, looking more than ready to come at the King when the time is right.

Looks like a brother shake is in order, but not for the tag team you think. One week after Luke Gallows’ meddling cost Cesaro a match against Karl Anderson, The Swiss Superman's fellow Raw Tag Team Champion Sheamus withstood another round of chicanery to defeated Gallows on Raw. As you might expect, The Suntan Biker Man beat the mousse out of Sheamus’ famous ’hawk throughout the course of their slugfest, but The Celtic Warrior hung tight long enough to tee Gallows up or the Brogue Kick. At that point, Anderson, who had been talking trash with Cesaro on commentary the entire match, cheap-shotted The King of Swing to set up a brawl that seemed to lead to a distraction-fuelled win for Gallows. But when Sheamus kicked out of Gallows’ last best shot, Cesaro got the better of Anderson on the ramp and it was Gallows, now distracted himself, who wandered into a Brogue Kick.

If it seemed like Raw General Manager Mick Foley has been unusually thin ice with Stephanie McMahon lately, that's probably because, low-key, he was: As a result of Braun Strowman's earlier, unchecked rampage, Stephanie McMahon cautioned that The Hardcore Legend — who was coincidentally due to be evaluated right when Strowman broke loose— would need to make The Undertaker's rumored return a reality in order to save his job.

Facing termination, Foley all but begged The Phenom to appear, but when the legendary Superstar remained in the shadows, Stephanie began to dress down the WWE Hall of Famer for his management gambles and allowing SmackDown LIVE to defeated Raw in the ratings. At that point, Foley was quite literally saved by the bell — or gong, as it were — as The Deadman finally made his grand return to the city where The Streak was snapped. He came with an announcement, too: No longer beholden to any man (or woman) in WWE, Undertaker revealed he had "dug 29 holes for 29 souls" and would be entering the Royal Rumble Match to lay them all to rest ... a development that Braun Strowman, observing on a monitor backstage, seemed veerrrryyy intrigued by.

Charlotte Flair's running assumption seems to be that Bayley isn't ready for the big time, but granted, it's a bit easier to prove that point if you take out her partner and team up with Nia Jax for a two-on-one beatdown. In a battle that united Charlotte & Nia against Banks & Bayley, The Queen and Jax opted for the most obvious and effective strategy possible by targeting Banks’ injured knee and forcing The Huggable One to go it alone. Give credit where it's due here: Bayley's passionate, intense performance kept the match far closer than it probably should have been at this point, but she couldn't get over the hump, and after a sneaky tag in, Nia finished her off with a big leg drop.

Even after Titus O’Neil's confrontation with Xavier Woods last week, The New Day seemed open to allowing The Big Deal another opportunity to join their crew after he sucker-punched Xavier Woods. They gave O’Neil a seven-years-delayed mulligan on his disastrous keg carry challenge from the original NXT (to be fair, he might have some Redemption points). But when The Big Deal dropped the keg of “Booty Juice” before crossing the finish line, he took issue with Kofi Kingston siding with the ref and found himself contending one-on-one with Kingston in the ring.

That, too, ended in booty for the former O’Neil, despite a powerful performance that included a series of blistering chops to the chest, a boot that knocked the hair tie from Kingston's dreads and a successful block of the sunset flip that defeated him last week. New Day came to their man's rescue in the nick of time, distracting O’Neil with Francesca II Turbo and leading him in a chase around the ring that landed him square in the path of Trouble in Paradise.

Well, if Chris Jericho's fate at the Royal Rumble is to become a sexy piñata, at least he'll have some star-spangled goodies to his name: The Ayatollah of Rock ‘n’ Rolla captured his very first United States Championship at the end of a Handicap Match between himself, Kevin Owens and Roman Reigns, who was too battered by his earlier, 3-on-1 beating to contend with Jeri-KO in a make-or-break defense of his title.

To be fair, Reigns seemed to realized his disadvantage and he attempted to lock Chris Jericho in the shark cage atop the ramp before the match started. That plan backfired when Jeri-KO drove him shoulder first into both the cage and the steel steps, and by the time the bell finally did ring, Jeri-KO's teamwork was too much for him to overcome. Even a trifects of Superman Punches to the best friends and a Spear to Jericho only delayed the inevitable. After Owens held Reigns in position for a Codebreaker and blasted the champion with the apron powerbomb, it was pretty much over. And once KO fed Reigns to a waiting Jericho for one last Codebreaker and, ultimately, the pinfall, it was official. Drink it in, maaaaannnnnnn. 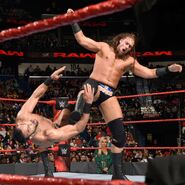 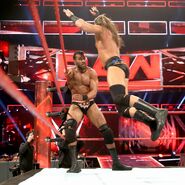 Retrieved from "https://prowrestling.fandom.com/wiki/January_9,_2017_Monday_Night_RAW_results?oldid=1557320"
Community content is available under CC-BY-SA unless otherwise noted.