The January 9, 2013 Edition of Main Event is a Professional wrestling television show of the WWE, it was taped at the American Airlines Center in Miami, Florida on January 8, 2013.

On the final Raw of 2012, Sheamus and Dolph Ziggler engaged in a back-and-forth contest that highlighted the abilities and resilience of both Superstars. As The Celtic Warrior closed in on victory, however, Big E Langston taunted him from the ring apron, allowing The Shield to strike in turn. Ziggler escaped thanks to the onslaught of Roman Reigns, Seth Rollins and Dean Ambrose — but still lost by disqualification. Looking to determine definitively who the better man was, The Showoff and Sheamus squared off once more in Miami's AmericanAirlines Arena in the featured contest on WWE Main Event.

The Celtic Warrior's challenge would not be easy — both Big E Langston and AJ Lee accompanied Ziggler to the ring, forcing Sheamus to remain wary of any potential distractions as well as the agile and cunning Money in the Bank winner inside the squared circle. The battle was a true display of the quickness and raw agility that makes Ziggler a formidable competitor against the pure brute power of The Celtic Warrior. Despite the large disparity in the physical tale of the tape, each Superstar knew his strengths and utilized them in an effort to secure victory.

Perhaps the presence of the massive Langston at ringside did indeed have an adverse effect on Sheamus’ psyche as Ziggler made great use of his speed and amateur wrestling background to keep his powerful opponent on the defensive. There's no arguing Mr. Money in the Bank's strategy was wise — mounting an offensive that would keep The Celtic Warrior's powerful arsenal at bay. Though Sheamus was able to strike back, each time he seemed to gain momentum — even delivering a powerful shoulder tackle to the outside from the ring apron — Ziggler fought back, showing off his incredible resilience. A true testament to Mr. Money in the Bank's cunning and agility came when he shockingly reversed the Battering Ram shoulder block.

The fighting spirit of The Celtic Warrior would not allow him to quit, however, and he managed to execute a bevy of powerful maneuvers that took their toll on The Showoff, eventually shifting momentum into his favor. Although Ziggler, maintained control through the contest, a powerful shoulder block from the top rope allowed The Celtic Warrior to set up for the Brogue Kick, bringing the entire WWE Universe to their feet.

The sequence of events that followed was jaw-dropping as The Showoff ducked the powerful maneuver only to miss a superkick of his own. Sheamus capitalized as Ziggler struggled to get back to his feet, and then the Celtic Warrior landed the Brogue Kick. The impact of the Irishman's boot sent Mr. Money Bank rolling out of the ring.

After the contest, the monstrous Langston approached the ring apron as Sheamus invited him in, ready for another fight. Instead, the big man smirked at the orange-haired warrior before returning to the locker room area.

The second contest of the evening featured The Barrett Barrage back on WWE Main Event as Intercontinental Champion Wade Barrett battled former United States Champion Zack Ryder. If Long Island Iced-Z could pull off a victory in this non-title bout, he would be making a strong case for himself as a contender for the Intercontinental Title.

As the contest got underway, Ryder utilized a wise strategy by not trying to go toe-to-toe with The Bare-Knuckle Brawler. Barrett balanced Ryder's more technical approach with his patented unorthodox style, though. The unpredictability of how and where the Intercontinental Champion strikes was most certainly on display, as Barrett always searches for an opponent's weakness to garner an advantage.

Ultimately, that volatility of the Intercontinental Champion's style proved to be too much for Long Island Iced-Z. Though the self-proclaimed “Internet Champion” seized an opportunity to execute the Rough Ryder, Barrett countered and struck back with the Bull Hammer elbow smash to secure the win. 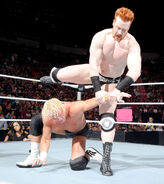 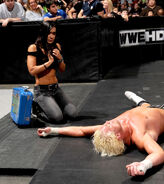 Retrieved from "https://prowrestling.fandom.com/wiki/January_9,_2013_Main_Event_results?oldid=1557318"
Community content is available under CC-BY-SA unless otherwise noted.