The January 8, 2018 Edition of RAW is a Professional wrestling television show of the WWE's RAW brand, which took place on January 8, 2018 at FedExForum in Memphis, Tennessee.

Still amped from his epic Intercontinental Title defense against Samoa Joe last week, Roman Reigns came into Memphis looking to expand his Roman Empire. Little did he know, he stepped into a good brother town.

To be fair, it wasn't exactly The Big Dog's boasting or his proclamation that “if you mess with one of the members of The Shield, you mess with all of us” that raised the collective ire of Finn Bálor, Luke Gallows & Karl Anderson, the reunited running mates now calling themselves The Bálor Club. That fault lies with Jason Jordan, whose Raw Tag Team Title win with Seth Rollins led the young Superstar to get a little too familiar with Reigns and Rollins.

Jordan's boast that he, Reigns and The Kingslayer (disappointed, for what it's worth, at his partner's lack of “timing”) might be nothing less than “the most dominant three-man group in WWE” was what brought The Bálor Club out in earnest, leading to a confrontation that boiled over when the good brothers insinuated that Jordan was a nerd. Jordan responded with a slap to the face of Gallows, and Raw General Manager Kurt Angle provided the solution, sanctioning a Six-Man Tag Team Match between the two groups for later in the night.

Mandy Rose & Sonya Deville stole the spotlight in a Six-Woman Tag Team Match last week, but the two young Superstars might not be quite ready to go it without Paige just yet. Facing Sasha Banks & Bayley, Rose & Deville looked no less impressive, but their inexperience ended up costing them down the stretch against the two former Raw Women's Champions despite Paige offering instruction at ringside (Mickie James flanked Banks & Bayley to even the odds).

That leaves a bitter pill for the Women's Royal Rumble-bound Absolution to swallow, especially given how thoroughly Rose & Deville asserted themselves against The Boss while keeping Bayley isolated on the apron. The Huggable One eventually tired of the cheap shots from Deville, however, and tackled her through the ropes, sending both spilling onto the ringside floor. A single misstep by Rose allowed Banks to lock in the Bank Statement for the tapout win, much to Paige's chagrin.

The WWE Universe has seen Matt Hardy progress past his breaking point and ascend to a “Woken” state on the mic. Now, they got their first look at what the reborn Superstar could do in the ring at the expense of Curt Hawkins. The Prince of Queens was unable to shake his T-shirt-certified losing streak, as a newly-aggressive Hardy gnawed on his arm, pummeled him with flailing fists and finally put him down with a neck-wrenching Twist of Fate.

And apparently, this is just the beginning. Hardy already has his eye on 29 more potential deletions, having officially declared for the Men's Royal Rumble Match. However, the reappearance of his rival Bray Wyatt in the center of the ring moments after his victory cut his celebration short. The two merely laughed in each other's faces in an otherwise silent confrontation, but Wyatt's appearance, as well as his own declaration for the Rumble Match, was a stark reminder that while becoming “Champion of the Multiverse” may yet be in the cards for Hardy, there is still one major obstacle in his way.

It's been a cruel winter for The Miztourage since their ringleader left on hiatus, but The Miz is back and he has business to attend to. Making his return to Raw amid the pomp and circumstance of “Miz TV” — complete with an intro from Elias — The A-Lister refused a series of gifts from his guests Curtis Axel and Bo Dallas that peaked with them offering the clothes on their back. Instead, Miz staked his claim on the prized possession he had lost on his way out the door: the Intercontinental Championship.

Recasting his defeat to Roman Reigns as allowing The Big Dog to "borrow" his title to help keep its prestige in his absence, The Miz declared that “Daddy’s home” and announced he was coming to collect. And, thanks to a negotiation with Raw General Manager Kurt Angle, he had a time and place to do so: At Raw's 25th anniversary show on Jan. 22.

It's early, but between all that and the prospect of teaming with Asuka in WWE Mixed Match challenge, The Miz's 2018 is shaping up to be quite awesome indeed.

Seven days ago, a bout of “influ-Enzo” pushed Enzo Amore's WWE Cruiserweight Title defense back a week. Now, an injury has extended his reign beyond even that. Although Muscles Marinara was feeling optimistic about his chances against his resilient challenger Cedric Alexander — who had received a “Rocky”-esque pep talk from Goldust earlier in the evening — a few early shots sent Amore scurrying for cover almost instantly.

Luckily for Enzo, he shoved Alexander off the top rope to the floor to give himself a ground-and-pound advantage, until a springboard knee from Alexander busted Amore's eyebrow open and spurred a fantastic rally from the challenger. It ended up inadvertently thwarting his efforts, however, as an over-the-top-rope plancha left Enzo with a tweaked ankle that prevented him from beating the 10-count and left the champion so agonized in the trainer's room that not even the presence of Nia Jax could comfort him.

Cesaro & Sheamus may have successfully negotiated their Raw Tag Team Title rematch for Royal Rumble with Raw General Manager Kurt Angle, but that was about the only good news they got on the night. Requesting that Angle supply them with some competition, The Bar got more than they bargained for when the surprise opposition of Titus Worldwide pulled off an upset of the three-time Raw Tag Team Champions.

In an effort that was all but written off even by Raw's commentary team, Titus O’Neil & Apollo Crews struggled to get out of the blocks against The Bar. Crews was brutalized by Cesaro & Sheamus, though he also allowed O’Neil the opportunity to score the upset win when he hit a moonsault off the apron that both dodged a Brogue Kick and took out an interfering Cesaro. The Big Deal sprang with a roll-up on the Irishman, and Titus Worldwide had a win in the books. The Bar, on the other hand, were left to pick up the pieces for the first time in a long time as their title rematch approaches.

Last week, Braun Strowman told Kane that he was in it for himself in their Universal Title Triple Threat Match against Brock Lesnar at Royal Rumble. And while animosity continued to brew this week between the Universal Champion and The Big Red Machine, The Monster Among Men picked his opportunity to strike.

After Lesnar and Paul Heyman responded to Kane's attack last week and the circumstances of the match — in short, Heyman promised dominance despite the stacked odds against his client and the lack of an “old-school” one-on-one challenge — The Devil's Favorite Demon attacked again, jumping The Beast at the top of the stage and brawling with Lesnar into the backstage area, at which point Strowman trucked them both.

The Gift of Destruction threw Lesnar clean across the hallway, smashed Kane with a road crate and produced a grappling hook that he used to pull the backstage rigging down on both of his opponents. The attack left The Beast loaded in an ambulance en route to a local medical facility, while Kane hobbled away with an injured leg. Suddenly, a Lesnar victory doesn't seem quite as certain as Heyman would have everyone believe.

Rhyno's quest to toughen up Heath Slater continues apace, though neither of the inaugural SmackDown Tag Team Champions have found much luck in their efforts of yet.

One week after picking a fight with Braun Strowman in an attempt to show Slater the way, The Man Beast squared off with Samoa Joe to demonstrate his grit to The One-Man Band. Unfortunately for Rhyno, it was Joe who put on the definitive demonstration of the contest. The Man Beast proved just difficult enough to defeat for Joe to get annoyed, but the two-time NXT Champion locked in the Coquina Clutch to submit his opponent all the same.

Joe wasn't even sweating his loss the previous week, labeling Roman Reigns’ win over him as a Pyrrhic triumph that Joe would follow up on when the time was right. Until then, however, The Samoan Submission Machine was setting his sights on the Men's Royal Rumble Match, targeting one particular Superstar as his first elimination: John Cena.

Alexa Bliss couldn't get Nia Jax to back her up against Asuka last week. Nor could she convince Nia that The Empress of Tomorrow had said something less than flattering to orchestrate a potential confrontation this week (the jig was up when Nia realized that even if Asuka did insult her, Alexa couldn't possibly have understood it, as the two Superstars don't speak the same language). But “The Irresistible Force” made a statement out of the undefeated Superstar all the same when she attacked Asuka in advance of her planned contest. The assault left Asuka writhing in pain on the mat and earned her a match with Jax next week. But with Nia having declared for the Women's Royal Rumble Match (inspired to pursue a title by Enzo Amore, no less), it might be time to ask if Asuka is ready for her.

In a match spawned from the question of whether The Bálor Club or the so-called “Champions Club” was the most dominant three-man team in WWE, the good brothers landed a deafening salvo when they knocked off the gold-plated trio of Roman Reigns, Seth Rollins & Jason Jordan, who were shown up again when another three-man squad came calling after the bout.

As for the epic Six-Man Tag Team Match, The Bálor Club brawled to the victory by working seamlessly as a group; one was never far from the other, so even when Finn found himself pummeled by Reigns, his partners were there to distract The Big Dog and tilt the match back in their favor. The “Champions Club,” on the other hand, seemed a step out of sync, and an overzealous Jordan rushed the ring and blinded the ref to a key tag from Rollins to Reigns (there's that timing issue again). The Kingslayer was left as easy pickings for a bone-rattling Magic Killer, and while Reigns dispatched Luke Gallows & Karl Anderson singlehandedly outside the ring (taking himself out of action in the process), Finn Bálor seized control, tossing Jordan from the ring and spiking the wounded Rollins with a missile dropkick and chest-caving Coup de Grâce for the win.

The night only got worse for the title-toting trio, as The Miz & The Miztourage struck while they argued among themselves, dispatching the Raw Tag Team Champions before wiping Reigns out with a Skull-Crushing Finale and, in the ultimate act of disrespect, a Triple Powerbomb. Consider the favor repaid and the message relayed. 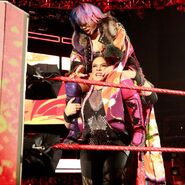 Retrieved from "https://prowrestling.fandom.com/wiki/January_8,_2018_Monday_Night_RAW_results?oldid=1557313"
Community content is available under CC-BY-SA unless otherwise noted.