The January 7, 2011 Edition of Smackdown is a Professional wrestling television show of the WWE's Smackdown brand, which took place on January 4, 2011 at the Tucson Convention Center in Tucson, Arizona.

Edge reigned supreme over Kane in the culmination of a brutal Last Man Standing championship onslaught. Both Superstars utilized every weapon in their reach, battling throughout the arena and destroying the ringside area, as they tried viciously to do the same to each other. After delivering a Spear to The Big Red Monster, The Rated-R Superstar followed it up with an excruciating Con-Chair-To to the knee, preventing Kane from answering the 10-count.

Shortly after Dolph Ziggler lost his Intercontinental Title to Kofi Kingston, SmackDown's Official Consultant Vickie Guerrero put the bleach-blond Superstar into contention for something even bigger. With General Manager Theodore Long absent, Guerrero used her temporary authority to add the former Intercontinental Champion Ziggler to the scheduled Triple Threat Match – set to decide the No. 1 contender to the World Heavyweight Championship – making it a colossal Fatal 4-Way Match.

After Wade Barrett stunned the WWE Universe – coming out of nowhere to attack Big Show and prevent a probable win by The World's Largest Athlete – the already volatile match erupted into absolute mayhem. This culminated in Ziggler hitting the Zig Zag on Cody Rhodes for the pin, catapulting him to the No. 1 contender position to Edge’s World Title.

As Kelly Kelly looked ready to hit the K2 legdrop on Michelle McCool, Layla jumped up on the apron. Her subtle distraction allowed her partner-in-flawless to counter and hit the Faithbreaker for the win. But, the fireworks didn’t end with the bell. After the match, Drew McIntyre emerged to stop a post-match attack on Kelly Kelly by Team Lay-Cool.

Before facing Rey Mysterio in a 2-out-of-3 Falls Match, a smiling Alberto Del Rio made a bold statement, informing the WWE Universe that it is his destiny to win this year’s Royal Rumble and go on to headline WrestleMania.

After avoiding the 619, Del Rio scored the important first fall on Mysterio with the cross armbreaker. The Ultimate Underdog roared back, using his athletic prowess to pick up the quick pinfall on his aristocratic opponent. Then, in the crucial final moments of the match, Ricardo Rodriguez held Mysterio’s feet as the masked Superstar was trying to get back in the ring. This prevented Mysterio from answering the 10-count and allowed his affluent adversary to triumph.

After the bell, Mysterio made Rodriguez pay dearly for his interference, dialing up a 619-splash combination on Del Rio’s unfortunate ring announcer. 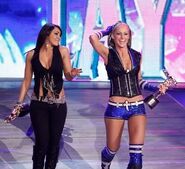 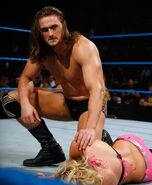 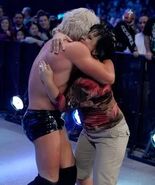 Retrieved from "https://prowrestling.fandom.com/wiki/January_7,_2011_Smackdown_results?oldid=1557307"
Community content is available under CC-BY-SA unless otherwise noted.