The January 4, 2010 Edition of RAW was a televised Professional wrestling show by the WWE's RAW brand, which took place on January 4, 2010 at The Nutter Center in Dayton, Ohio. The Guest Host was Bret "The Hitman" Hart.

The conclusion of the WWE Title Match at Survivor Series 1997 between then-champion Bret “The Hitman” Hart and Shawn Michaels remains one of the most controversial episodes in WWE history. Hart was forced to relinquish his title to HBK after the referee called for a quick bell while Michaels had his opponent locked in Hart's signature submission hold, The Sharpshooter, despite the fact that Hart never submitted. The incident, known as the “Montreal Screwjob,” left a bitter taste in Hart's mouth, including a palpable disdain for both Michaels and the man who orchestrated his defeat, Mr. McMahon. While revenge has always nourished motivation, time continues to mend old wounds, which seemed to be the case when Hart addressed the audience at the top of Raw. Not only did the former five-time WWE Champion and WWE Hall of Famer thank the WWE Universe for their support, he also called out Michaels in an effort to bury the hatchet. Michaels obliged, and the two talked openly about their feelings from that night and beyond. The men concluded their conversation with a handshake and, eventually, a heartfelt embrace. Perhaps in a forgiving mood, Hart even called out Mr. McMahon, who nonetheless did not emerge to join the two in the ring.

In the wake of a serious leg injury that will have Melina out for several months, WWE has arranged a Divas Championship Tournament to determine a new champion. The first round witnessed Maryse facing off against Brie Bella, who was accompanied by her twin sister, Nikki. Just as it appeared the conceited Canadian had gained an advantage, Nikki switched places with her weary sister. After a futile attempt to alert the referee, the beautiful blond took matters into her own lethal hands and finished Nikki off herself to prevail and move to the next round.

United States Champion The Miz loves to be seen and, unfortunately, heard. Which may explain why he sat in on commentary to watch the Fatal Four Way Match featuring MVP, Mark Henry, Carlito and Jack Swagger to determine the No. 1 contender for the U.S. Title. When the dust, and Miz's mouth, finally settled, Montel Vontavious Porter emerged victorious among the field and will face the self-proclaimed “Awesome” Superstar for the championship.

Chris Jericho had his chances. The SmackDown Superstar and his partner, Big Show, held the Unified Tag Team Championships for months, which allowed Jericho to appear on all WWE brands, including Raw. Last month, however, Jeri-Show dropped the titles to Triple H & Shawn Michaels. Ever since, the arrogant Superstar has done everything in his power to recapture the titles, which would once again allow him to launch his petty attacks on Raw.

Jericho's whining, however, simply wasn't enough. When Jeri-Show teamed up against DX, The Game and HBK, with a little help from Hornswoggle, managed to overcome their opponents and bid Jericho a gleeful goodbye.

A man comfortable with destroying opponents inside a ring, Mike Tyson, will act as special guest host of Raw next week. This won't be the first time the boxing legend has joined Raw, and this time is sure to be just as memorable.

Sheamus continued his frightening reign. After retaining his title last week against John Cena, the WWE Champion came crowing. After bragging that he is now the best there is and the best there will ever be, Sheamus was confronted by a courageous Evan Bourne, who stepped forth to challenge him. While the high-flyer demonstrated that speed and agility can stagger a giant, The Celtic Warrior managed to hinder and hobble Bourne, persisting on his path of ruin.

Last Monday, Randy Orton gave his Legacy charges, Cody Rhodes & Ted DiBiase, an ultimatum: Win your match or be barred from the group. This week, the Legacy ringleader was forced to choke down a spoonful of his own medicine. Earlier in the evening, Rhodes & DiBiase confronted their mentor and told him that if he lost his match against Kofi Kingston, he would be booted from the group.

With Rhodes & DiBiase looking on at ringside, The Viper clashed with Kingston in a rivalry that has boiled over several times in the past. On this occasion, though, Orton would prevail, perhaps in part due to a bit of unexpected incentive.

If Bret Hart’s appearance on Monday Night Raw could be summed up in one world, that’s it. The former five-time WWE Champion and WWE Hall of Famer seemed determined to bring perspective and resolution to the controversial events of the past, most glaringly the infamous “Montreal Screwjob.”

Like a leery mountain lion guarding his pride, Mr. McMahon invited Hart into the ring. While the two proud men initially reacted defensively, trading cold words and icy glares, their distrust eventually began to thaw. The Chairman even announced that Hart's father, famous trainer Stu Hart, would be inducted into the WWE Hall of Fame this spring.

After the two had shaken hands and raised their arms in a triumphant truce, however, Mr. McMahon reverted to form, hitting the WWE Hall of Famer with a low blow that left him in a fetal position in the center of the ring. Like unicorns, the Loch Ness monster and the lost city of Atlantis, the return of Bret Hart to WWE seemed merely the stuff of legend, a sight among the WWE faithful that would never come to fruition.

Then it happened. After a controversial exit and a 12-year absence, The Excellence of Execution agreed to return to WWE as the first special guest host of Raw to kick off the new year. Even Bigfoot himself couldn't have proven a more exciting host ... or more shocking.

For the first time in 12 years, Bret Hart walks towards a WWE ring.

"Hit Man" soaks in the WWE Universe's reaction for his return.

After being called out, Shawn Michaels makes his way to the ring. 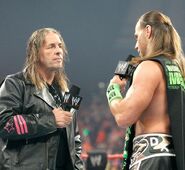 Bret & HBK take about what happened 12 years ago.

This is one of the most historic moments in recent WWE memory. 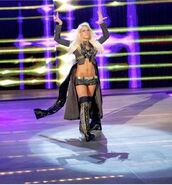 Maryse heads to the ring hoping to capitaliza on this unique opportunity. 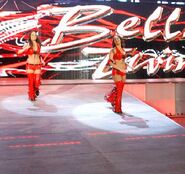 The Bellas went to win the Eight-Diva Tournament and take the title. 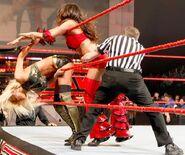 Maryse ducks between the ropes out of Brie's grasp.

Although Nikki and Brie Bella switched places, Maryse still got the win.

A happy Maryse advances through to the next round.

The Miz talks to Maryse

Retrieved from "https://prowrestling.fandom.com/wiki/January_4,_2010_Monday_Night_RAW_results?oldid=1557298"
Community content is available under CC-BY-SA unless otherwise noted.