John Cena kicked off SmackDown LIVE as a conquering hero returning from battle, and for very good reason. On Sunday, the “Never Give Up” Superstar overcame AJ Styles in an epic contest to become a 16-time World Champion – tying a record set by WWE Hall of Famer Ric Flair.

While Cena was more than ready to get to business and discuss defending his crown against five opponents inside the Elimination Chamber in two weeks, he could not even complete a full thought before 2017 Royal Rumble winner Randy Orton and one of The Champ's Elimination Chamber Match challengers, Bray Wyatt, interrupted.

The Eater of Worlds waxed poetic about how one way or another the WWE Championship would soon be the property of The Wyatt Family. The two then attempted to lambast Cena, however, Cena would soon have backup in the way of the exiled Luke Harper, who joined The Champ in combatting Orton & Wyatt. Because of the chaos, SmackDown LIVE Commissioner Shane McMahon arrived on the scene to say that the two pairs would square off in a tag team match ... next!

In an interesting wrinkle, while Luke Harper seemed fully dedicated to assisting John Cena counteract The Viper, he still seemed hesitant to engage with The New Face of Fear. This would ultimately cost The Champ. For in the height of the action, as it appeared Harper might finally strike his former leader, bedlam ensued and allowed for Orton to hit the RKO on Cena and pick up a huge victory over the man he could potentially face at WrestleMania.

Embracing his new look from last week's shopping spree, James Ellsworth opted to introduce Carmella as she prepared to take on Delilah Dawson. Carmella had the match firmly in control for the majority of the contest, but right when it seemed the local competitor was finally gaining some steam, Ellsworth opted to trip her up behind the official's back and allowed Carmella to lock in the Code of Silence for the win.

Following their encounter last week, the personal conflict between Dolph Ziggler and Kalisto entered its next phase with a match on SmackDown LIVE.

Kalisto's friend Apollo Crews kept a watchful eye on the match from backstage as the two Superstars went back and forth. In the end though, Ziggler's new aggressive streak paid off as he was able to withstand Kalisto's furious flurry and hit a superkick for the win.

After the match, The Showoff attempted to rip off Kalisto’ mask, however Crews came to his friend's aid, sliding in to stop him, causing Ziggler to retreat.

Following her pinning of SmackDown Women's Champion Alexa Bliss on the Royal Rumble Kickoff in the Six-Woman Tag Team Match, Naomi teamed with Becky Lynch to take on Bliss and Mickie James on SmackDown LIVE to see if she could follow up on the momentum.

The two sides had a contentious contest with control shifting back and forth, yet, in the end, it was Naomi who was able to again snag the victory with a split legged moonsault over Bliss.

And now, with a second straight victory over the champion in less than a week, the question had to be raised if Naomi would be next in line for a SmackDown Women's Championship opportunity.

Jason Jordan and Chad Gable issued an open challenge for their SmackDown Tag Team Championship, and although they are forever “Ready, Willing and Gable” to take on all comers, they may have gotten a little bit more than they bargained for as The Usos, The Vaudevillains, The Ascension, Breezango and Heath Slater & Rhyno all heeded their call!

A melee quickly broke out between all the units before a bell could ever ring, and in the end it was only American Alpha and Heath Slater & Rhyno standing tall.

From the start, The A-Lister openly criticized another Elimination Chamber competitor, Baron Corbin, for getting involved in his match with Ambrose last week, as The Lunatic Fringe and The Phenomenal One both looked to make a statement on The Road to WrestleMania.

Eventually, though, Miz's bashing of Corbin backfired as The Lone Wolf joined him at the commentary desk. And as match's intensity began to reach epic proportions, so did Miz and Corbin's war of words. And in the final moments, their escalation led to them getting physical at ringside and becoming a distraction for Ambrose, who took both of them out, which led to Styles capitalize by hitting a Styles Clash on The Lunatic Fringe for the win.

After the contest, Miz and Corbin both got their licks in, first with Miz hitting the Skull-Crushing Finale on Ambrose and then Corbin taking out both Miz and Ambrose with End of Days as Corbin stood tall and jaw jacked with The Phenomenal One who continued to celebrate on the ramp. 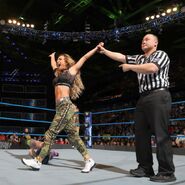 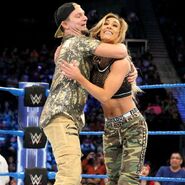 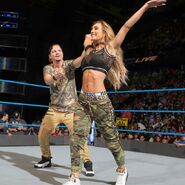 Retrieved from "https://prowrestling.fandom.com/wiki/January_31,_2017_Smackdown_results?oldid=1557294"
Community content is available under CC-BY-SA unless otherwise noted.