The January 31, 2011 Edition of RAW is a Professional wrestling television show of the WWE's RAW brand, which took place on January 31, 2011 at Dunkin' Donuts Center in Providence, Rhode Island.

Aye! Aye! Aye! Less than 24 hours after surviving in a field of 40 competitors to win the Royal Rumble Match, Alberto Del Rio paid an ostentatious visit to Raw, complete with dancers and mariachi band. As the winner of the Rumble, the Mexican elitist was there to announce which title he will compete for at WrestleMania. Before his pronouncement, WWE Champion The Miz emerged in an attempt to sway Del Rio's decision toward World Heavyweight Champion Edge. For his part, The Rated-R Superstar appeared, too, and embraced the moneyed Mexican's decision to contest for his World Heavyweight Title.

So eager to tangle was Edge, in fact, that he clobbered Del Rio. Amid the chaos, Del Rio shrewdly wielded a nearby guitar and proceeded to smash it over Edge's shoulder. He then whipped his rival into an excruciating cross armbreaker – with a winning smile on his face.

Later in the night, Edge would get a chance to face his fellow titleholder, Miz, in a champion versus champion match.

With the bout complete, Randy Orton slithered in to add injury to insult. After The New Nexus had distracted him at Royal Rumble, costing him the WWE Title, The Viper sought retribution. He hammered McGillicutty before the Nexi could hobble from the ring. WWE's Apex Predator then trained his fangs on Harris, dropping him with a thunderous RKO and angling to punt his skull. Moments before he could, however, New Nexus leader CM Punk warned that were Orton to follow through, he would face serious repercussions. Punk's words only served to spur on The Viper, who kicked Harris with a sickening thud. Orton then escaped through the crowd as medics attended to his prey.

Ever since The Bellas discovered that Daniel Bryan has been secretly dating Gail Kim, the twins have given the cold shoulder to the U.S. Champion. And now, it's Kim who's feeling frigid, too.

After Bryan overcame an impressive Tyson Kidd to retain his title, Brie and Nikki, who were watching ringside, unleashed a blizzard of punches on Kim, who attempted to plow through the two before order could finally be restored.

During the Royal Rumble, WWE Champion The Miz eliminated John Cena. Well, WWE's 2010 Superstar of the Year wasn't about to let “The Cleveland Screamer” go free. Instead, as Miz appeared to gain the upper hand during his match with World Heavyweight Champion Edge, Cena addressed him from a skybox within the Dunkin Donuts Center. The impromptu shout-out rattled the so-called “Awesome One” enough to allow The Ultimate Opportunist to level his opponent with a Spear to capture the win.

Eve netted a win when it counted most, in a Fatal 4-Way Match at Royal Rumble the night before. The new Divas Champion, however, failed to take flight in a tag team match when she paired with Natalya against Michelle McCool & Layla. McCool, particularly, had an axe to grind after she'd felt she had won at the Rumble. Instead, she helped her partner punish Eve, who Layla pinned to triumph.

Contestants on So You Think You Can Dance? can rest easy. Prior to the match pitting Mark Henry & The Great Khali against The Usos, Raw's General Manager switched the bout to a dance-off. Despite some truly “unorthodox” dance moves, The World's Strongest Man & The Punjabi Playboy got their groove on enough to notch the victory.

Jerry “The King” Lawler has enjoyed quite a storied career, but he's about to add yet another chapter. The WWE Hall of Famer prevailed in a seven-man Raw Rumble Match against John Cena, King Sheamus, John Morrison, R-Truth, Randy Orton and CM Punk.

The first man over the top rope was actually the leader of The New Nexus, quickly followed by The Viper. Third over the rope was the man who eliminated Orton, R-Truth. After a series of incredible athletic saves, The Prince of Parkour finally fell as well. Next to go, Cena got toppled over the top. And finally, Sheamus flipped over and out when he missed the Raw announcer with a Brogue Kick.

Lawler's surprising success comes just three weeks before the Elimination Chamber pay-per-view. As a result of the Raw announcer's win, he will once again enter a title bout to face WWE Champion The Miz, who he nearly defeated in a TLC Match last month. As for his six fellow competitors, they too will compete at the pay-per-view. The sextet of Superstars will be forced to square off inside Satan's Structure with the winner earning the opportunity to challenge the WWE Champion at WrestleMania. 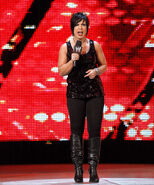 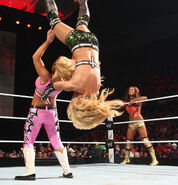 Retrieved from "https://prowrestling.fandom.com/wiki/January_31,_2011_Monday_Night_RAW_results?oldid=1630279"
Community content is available under CC-BY-SA unless otherwise noted.