The January 3, 2011 Edition of RAW is a Professional wrestling television show of the WWE's RAW brand, which took place on January 3, 2011 at US Airways Center in Phoenix, Arizona. This was the 919th Monday Night Raw and the first of 2011.

There is no worse enemy than a former friend. After all, who knows your weaknesses quite as well? John Morrison discovered that truth when he competed in a Falls Count Anywhere title match against his ex-tag team partner and current WWE Champion The Miz. The Shaman of Sexy simply could not overcome the relentless attack of The Awesome One in a memorable contest, the first of 2011.

Miz sycophant Michael Cole was joined by Josh Mathews at the announce table due to the absence of Jerry “The King” Lawler, who was still recuperating from an attack he suffered at the hands of Miz last week. As Cole and Mathews called the action, the former co-hosts of “The Dirt Sheet” battled in and around the ring until, finally, the WWE Champion managed to pin his opponent to retain the title.

After exchanging painful slaps over the past two weeks, Divas Champion Natalya and Melina appeared eager to settle things in the ring. Nattie teamed with Eve & Brie against Melina, Maryse & Alicia Fox.

During the bout, Brie's sister Nikki emerged from under the ring and the two pulled off their increasingly infamous Twin Magic for the win – or so they thought. Instead of victory, though, the match was allowed to continue in light of the hijinx. No matter. Natalya's team shifted into a higher gear as Eve managed to pin Melina's shoulders to the canvas for the win. Slap's all she wrote.

Santino Marella & Vladimir Kozlov’s plan for world domination will just have to wait. The WWE Tag Team Champions faced off against Jimmy & Jey Uso and dropped the bout to the twin sons of Rikishi. As their former associate, Tamina, cheered on her beau Santino, The Usos took control for the victory and fired a warning shot across the bow of the international men of misery.

After the bout, though, Vlad, Santino and Tamina returned fire, pushing their opponents out of the ring and attacking with a double Cobra.

Call it a case of too many chiefs, not enough idiots. Last week, CM Punk appeared to take the reins of the “new” Nexus. This week, though, The Second City Savior ran up against the group's founder, Wade Barrett, who took issue with the power grab. The two even bickered over who could rightly claim credit for John Cena’s recent injury, which kept WWE's 2010 Superstar of the Year out of action (he may return next week).

Before tensions could escalate, Raw's anonymous General Manager announced that a Triple Threat Steel Cage Match would take place later in the evening in order to determine the No. 1 contender for the WWE Title. Upon hearing the news, Punk and Barrett agreed to a deal. Punk offered the Englishman his opportunity to compete in the match against King Sheamus and Randy Orton. Were Barrett to win, he would remain leader of The Nexus. However, were he to lose, he would be banished from the group forever.

Money talks. In fact, judging by the affluent Alberto Del Rio, it won't shut up. The SmackDown Superstar paid a visit to Raw to scout talent and sell the notion that he will emerge victorious at the Royal Rumble in four weeks. R-Truth, however, wasn't buying.

Truth confronted Del Rio and challenged him to a match, which the Raw GM mandated. In the end, the well-heeled Del Rio prospered once again, prevailing over the streetwise Superstar.

Wade Barrett lie on the canvas as still as a guard at Buckingham Palace. Just moments earlier, the incapacitated Englishman appeared well on his way to victory over King Sheamus and Randy Orton in a Triple Threat Steel Cage Match to determine the No. 1 contender for the WWE Title.

As he prepared to climb over the steel structure, however, his Nexus nemesis CM Punk offered to assist him. As Barrett took his hand, the Straight Edge Superstar ripped the Nexus armband from the Englishman and booted him down to the canvas. There, The Celtic Warrior greeted him with a Brogue Kick. Orton then leveled Sheamus with an RKO and slithered past his opponents and through the cage door to victory. As a result, Barrett will be forever banished from The Nexus while The Viper will face WWE Champion The Miz in a title match at Royal Rumble in four weeks. 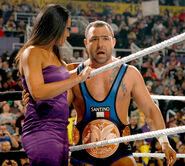 Retrieved from "https://prowrestling.fandom.com/wiki/January_3,_2011_Monday_Night_RAW_results?oldid=1557256"
Community content is available under CC-BY-SA unless otherwise noted.