The January 3, 2005 Edition of RAW was a televised Professional wrestling show by the WWE's RAW brand, which took place on January 3, 2005 at the Nassau Coliseum in Uniondale, New York.

Last week, Eric Bischoff shook the very foundation of this Sunday's Elimination Chamber Match at New Year's Revolution by introducing a "Beat the Clock" challenge. With only six days remaining until the big event in San Juan, Puerto Rico, Bischoff shook things up one more time. At the beginning of this week's RAW, Bischoff said that just as last week the six competitors had a chance to beat the clock, this week, they’d have a chance to beat each other.

Batista faced Chris Benoit, Edge battled Chris Jericho and in the main event, Triple H took on former Evolution member Randy Orton. Orton hadn't faced Triple H since he lost the World Heavyweight Championship to him at Unforgiven all the way back in September. With the referee knocked out late in the match, Batista came down to the ring and took out Orton with a clothesline. Benoit came down to take Batista out of the equation and Shawn Michaels ran down, decked out in referee garb, to officiate the rest of the match. With HBK's back turned, Edge flew into the ring to set up for the spear. Jericho joined the fray and took out Edge before he could take out Michaels as the fracas moved to the outside. Triple H finally arose only to see his nemesis Michaels standing there. With his attention diverted, Orton set up for the RKO but Triple H countered. Orton came back with another RKO attempt and this time he hit it, pinning Triple H in the process.

Orton had momentum heading into New Year's Revolution, but no one was on a bigger roll than Batista. He continued that roll in his match against Chris Benoit earlier in the evening. The animal of Evolution was just too overpowering for Benoit. The Crippler managed to hook in the Crossface, but Batista powered out of the move, carrying Benoit on his back, and rammed his head into an exposed turnbuckle several times before hitting the Batista Bomb for the pin. Later, Batista pledged his allegiance to Triple H and said that he would help Triple H win the World Championship at New Year's Revolution.

Gene Snitsky takes on Kane at New Year's Revolution, and on RAW, Snitsky said he was surprised that Kane was ready to come back after the injuries he suffered at Taboo Tuesday. He also said that he had a surprise for Kane, as well. Later in the evening, when Trish and Lita were going at it in the ring before their Women's Championship match in six days, Snitsky stormed the ring, diverting Lita's attention. Trish laid out the champion with the Chick Kick, and then Snitsky placed a steel chair around her throat and looked to be getting ready to crush her throat just as he had done to Kane in October. The fire exploded and Kane's music hit as the Big Red Monster returned to RAW, throwing Snitsky into the crowd.

Jim Ross and Jerry "The King" Lawler were also scheduled to take on Muhammad Hassan and Khosrow Daivari in a civilized debate.

What started out as a war of words, soon turned into fisticuffs, as Hassan and Daivari attacked The King and J.R. Hassan wrapped his belt around his fist and delivered two crushing blows to The King, busting him wide open. He then choked out J.R. with the same belt. It was announced later in the night that The King — with J.R. in his corner — would take on Hassan in a grudge match at New Year's Revolution.

Intercontinental Champion Shelton Benjamin was able to get the win over Sylvain Grenier in a non-title match, but Maven added guest commentary after challenging the champ to a title match at New Year's Revolution.

Plus, Trish Stratus defeated Victoria, sending a message to Lita that she'll stop at nothing to take the Women's Championship back. 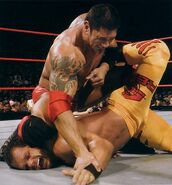 Retrieved from "https://prowrestling.fandom.com/wiki/January_3,_2005_Monday_Night_RAW_results?oldid=1557252"
Community content is available under CC-BY-SA unless otherwise noted.