The January 28, 2019 Edition of RAW is a Professional wrestling television show of the WWE's RAW brand, which took place on January 28, 2019 at Talking Stick Resort Arena in Phoenix, Arizona. This was the Raw after the Royal Rumble.

Seth Rollins has won the Men's Royal Rumble Match, he's pointed at the sign, and he's off on The Road to WrestleMania, whether he's ready or not. Though The Kingslayer had promised to take his time deciding who he would challenge at The Showcase of the Immortals, Triple H came out to force his former protégé's hand by informing him that WWE Champion Daniel Bryan and Universal Champion Brock Lesnar would both be in the building later in the night, and Rollins had to pick his poison by the end of the night.

The King of Kings’ session was quickly interrupted, however, by Dean Ambrose, who successfully wheedled his way into a match against Rollins by dropping a salient point or two (Rollins has pretty much never beaten him without help) and striking a nerve with Triple H, who was hesitant at first to make the match (“Do you need to ask your father-in-law for permission?”). Ambrose did indeed have Rollins’ number at the outset, as some combination of wear and tear and the magnitude of the choice before him seemed to leave The Architect a step slower than usual. In fact, Ambrose nearly ensnared Rollins in La Magistral, but The Kingslayer rallied in characteristic fashion, answering with the bucklebomb, superkick, and a Stomp to put Ambrose away — much to the visible frustration of The Lunatic Fringe.

We officially have a tandem in the WWE Women's Tag Team Championship Elimination Chamber Match — and, perhaps, a front-runner: The first tag team to qualify for the historic bout will be Nia Jax & Tamina, thanks to a victory over Alexa Bliss & Mickie James. The lion's share of credit for the win goes to The Irresistible Force, whose dominant stint in the Men's Royal Rumble Match seems to have reinvigorated her confidence. (She even stepped to a still-stewing Dean Ambrose before the match, expelling The Lunatic Fringe from the ring with an elbow to the back of the head). Bliss & Mickie wisely tried to keep Nia out of the ring, but when she got into the match, she seemed certain put it away. That she did, courtesy of a double Samoan Drop that took out both her opponents and, perhaps, provided a taste of things to come inside the Elimination Chamber.

You may remember a few months ago when Kurt Angle was savaged by Drew McIntyre, but what you may not recall is that The Olympic Hero was originally slated to face Baron Corbin that night. So, Angle's bout with the former General Manager-Elect wasn't just a grudge match with the man who replaced him as Raw's showrunner, but a chance for the WWE Hall of Famer to exact some long-stewing redemption.

Unfortunately, redemption slipped through his fingers, as did The Lone Wolf's ankle. Angle ensnared Corbin in his signature Ankle Lock and cranked hard, but Corbin escaped the maneuver, dropped his foe with the Deep Six and kept him down for three. Eager to rub his victory in the audience's face, Corbin returned to the ring to administer the End of Days to Angle and cap off an evening of complete vindication — though not, perhaps, for the man everyone expected.

Tapping out to a Kimura Lock wasn't quite the ending Finn Bálor envisioned for his Universal Championship bout with Brock Lesnar. But the Irishman was willing to call it a moral victory, recasting Lesnar's post-match beatdown of him as a reflection of the fact that he had, against all odds, made The Conqueror into a believer and asserted himself as a threat. Bobby Lashley? Not quite so easily convinced.

The All Mighty and Lio Rush hit the ring to talk themselves up at Bálor's expense — a bit of overcompensation, Finn reasoned, for Lashley's near-immediate exit from the Royal Rumble Match. The Intercontinental Champion responded by ruthlessly dropping the Irishman three times before Rush draped his shirt over the fallen Superstar's body. It was a demoralizing ending to The Extraordinary Man's fairy-tale run at the Universal Title, but there might be a silver lining for the fallen David: This time, Goliath seems to be coming to him.

Zack Ryder & Curt Hawkins’ reunion last week was a major moment almost 10 years in the making, but the former WWE Tag Team Champions have a long way to go before they can hang with the likes of The Revival, who are borderline telepathic at this point in terms of their communication and skill. Add onto the fact that Hawkins still can't quite shake the bad juju of his losing streak, and The Prince of Queens was ripe pickings for a Shatter Machine after a surging Ryder was sent tumbling out of the ring. The Ultimate Broski was more than supportive of his friend after the loss, but there's still work to be done.

Elias isn't happy. The Living Truth may have gone all man-of-the-people for a minute, but those days are behind him, and now he's just performing for himself. That obviously didn't sit well with Jeff Jarrett, who took a guitar across the back at the Royal Rumble, but another aggrieved party was the Road Dogg, who resurfaced for an impromptu duet of “With My Baby Tonight” alongside the WWE Hall of Famer to make up for the concert Elias would not give them. The Living Truth was once again unimpressed, and he shattered guitars over the backs of the D-O-Double-G and, after a brief fracas, Jarrett himself.

Give Dana Brooke credit: She gets better each time she steps foot in the ring. Still, insisting she's better than Natalya might be a bit bold, especially when she's teaming with Natalya and an opportunity at history is on the line. Suffice it to say, the impromptu team of Dana and The Queen of Harts will not be heading to the Elimination Chamber pay-per-view, as The Riott Squad's Liv Morgan & Sarah Logan defeated them in a qualifier for the all-important WWE Women's Tag Team Championship Match.

Brooke proved harder to put away than anticipated, though Natalya handily took control of the match by trapping Morgan in the Sharpshooter. Dana attempted to run interference against Ruby Riott on the apron and succeeded, only for Logan to bulldoze her into Natalya, breaking the hold and leaving her vulnerable to a roll-up from Liv. Natalya was understandably having none of Brooke's post-match apologies, but Dana has never been one to let her setbacks get to her. Perhaps she'll rise to this opportunity as well.

Sasha Banks took Ronda Rousey to the limit at Royal Rumble. Bayley very famously defeated Sasha Banks in a match that provided one of the cornerstones of the Women's Evolution. So, could The Huggable One succeed where her tag team partner failed against The Baddest Woman on the Planet?

No, she could not. But she came very close, thanks in part to the lingering damage from The Boss and the open-challenge stipulation that gave Bayley an element of surprise. An injury to The Baddest Woman on the Planet's knee gave Bayley an extra leg up as well (so to speak), and The Huggable One capitalized with an impressive kneebar. She even tried to literally succeed where Banks failed by applying the Bank Statement. When that failed, Bayley went high risk by climbing to the top rope, and Rousey struck, rolling her off the turnbuckle and right into an Armbar for the submission win.

Of course, conspicuous by her absence was the Superstar who had won the Women's Royal Rumble, who has harbored a grudge against Rousey for months and who was slated to make her decision as to who she'll challenge at WrestleMania: Becky Lynch. The Man's shadow loomed large even as Rousey and Bayley shook hands in the ring. And then...

Speak of The Man, and she shall appear. Despite having been advertised to make her WrestleMania challenge known on tomorrow night's SmackDown LIVE, Women's Royal Rumble Match winner Becky Lynch reared her head on Raw to confront Ronda Rousey and issue a challenge for The Showcase of the Immortals.

The reason, among others, was that Becky wanted to settle some unfinished business: Namely, that Rousey never sought her out after Lynch embarrassed her this past November, so Becky decided to take matters into her own hands and target Ronda's “mystique” in front of the whole world. Finally face-to-face with the opponent who had sought her out for months, Rousey showed no fear in the face of The Man, promising to “own” her challenger at The Show of Shows and storming out of the ring while Lynch remained, a sly smile crossing her face. Here we go.

Braun Strowman fought the good fight and narrowly missed out on WrestleMania in the Men's Royal Rumble Match. And, having congratulated Seth Rollins on a battle well won, The Monster Among Men turned his attention to some unfinished business with Drew McIntyre, who helped injure Strowman a couple months ago and has been skating by untouched ever since.

That certainly ended as Strowman administered These Hands to The Scottish Psychopath, but ultimate payback was snatched from him in more than one fashion: Baron Corbin's interference handed Strowman the disqualification win (a literal, if not satisfying, victory), and a two-on-one attack from the pair got the better of The Gift of Destruction, who suffered a double chokeslam atop the steel steps.

Seth Rollins didn't say outright that he was challenging Universal Champion Brock Lesnar at WrestleMania, but the winner of the Men's Royal Rumble Match didn't have to in order to make his point. The Kingslayer charged The Beast in the closing moments of Raw, cutting Paul Heyman short right as he was attempting to convince Rollins that he was better off challenging Daniel Bryan instead. Clearly, the promise of a grappling classic with the WWE Champion didn't interest Rollins, as he made a beeline for Lesnar and was immediately met with five consecutive F-5's, the last one atop the Universal Title. Ever defiant, Rollins sat up and screamed “Is that all you got?!,” to which The Beast replied with a sixth F-5 as Raw went off the air. The words weren't spoken, but the decision was clear. Now come the consequences. 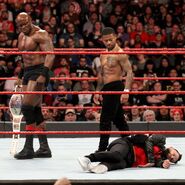 Retrieved from "https://prowrestling.fandom.com/wiki/January_28,_2019_Monday_Night_RAW_results?oldid=1557213"
Community content is available under CC-BY-SA unless otherwise noted.