February 1, 2017
The January 25, 2017 Edition of NXT is a Professional wrestling television show of the WWE, which took place at the Full Sail University in Winter Park, Florida on January 5, 2017.

While NXT Women's Champion Asuka has three challengers awaiting her in San Antonio, the rest of the division is jockeying for the chance to be next in line to challenge The Empress of Tomorrow. Last week, good friends Ember Moon and Liv Morgan both expressed their hopes of stepping up and going after the coveted title. This week, they stepped into the ring to square off and show who was truly ready.

Morgan used her unbelievable agility to keep Moon off-balance, but the stiff striking ability of Moon turned the tides of the bout. The feisty New Jersey native tried her best to stay on Moon, but Ember used her strength advantage to toss Morgan over the ropes to the arena floor. NXT's War Goddess followed up by connecting with a devastating Eclipse to seal the victory and move one step closer toward the NXT Women's Championship.

After being accused by Kona Reeves of leaving him to be attacked by SAnitY several months ago in Toronto, No Way Jose offered to settle things with the Hawaiian Superstar inside the squared circle. There was no shortage of fun when the bell rang, as Jose brought the fiesta, toying with Reeves. However, No Way Jose showed that he was ready to fight when Reeves disrespected him, putting his foe down for the three-count with a big right hand.

After the bell, Dasha Fuentes attempted to get an interview with Jose, but was interrupted by Elias Samson. The Drifter began to strum a tune aimed toward No Way Jose, but the dancing Superstar and the NXT Universe cut the songster off with a simple refrain of their own – “Just drift away!” An incensed Samson charged at Jose, only to be on the receiving end of No Way Jose's powerful right hand.

Just days before his TakeOver: San Antonio showdown with Tye Dillinger, Eric Young tuned up for battle by facing Chris Atkins. Though the leader of SAnitY gave up the size difference to the 265-pound prospect from the WWE Performance Center, he made up for it in ferocity. Young took advantage of a brief distraction from his chaotic crew and began pummeling Atkins to the mat, taking time to mock Dillinger along the way.

Young picked up the victory with a vicious wheelbarrow neckbreaker, then grabbed the microphone to address The Perfect 10. SAnitY's ringleader let Dillinger know that he made the wrong choice in turning down his offer of membership, before unleashing his newest charge, the monstrous Killian Dain, on Atkins. Is that the fate that awaits Tye Dillinger this Saturday in San Antonio?

With the NXT Women's Championship Fatal 4-Way Match inching closer and closer, NXT General Manager William Regal wanted to hear from the four competitors in the battle, but made them promise that the proceedings would not turn into a fight.

Promises, however, were made to be broken. As soon as her three challengers were in the ring, Asuka charged to the squared circle and went straight for Billie Kay and Peyton Royce. The two Australians scurried from the ring, leaving Asuka and Nikki Cross to go nose-to-nose. Kay and Royce jumped them from behind, but were once again tossed from the ring, leaving The Empress of Tomorrow and SAnitY's most rabid member alone in the ring.

Security tried to keep the two apart, but were pummeled by the two Superstars. The security force seemingly got a handle on things as they pulled Asuka from the ring, but they failed in containing Cross, who climbed to the top rope and dove off onto the NXT Women's Champion and the guards. Kay and Royce stood stunned at the top of the ramp, looking at the pile of humanity that laid before them, perhaps wondering what they had gotten themselves into at TakeOver: San Antonio. 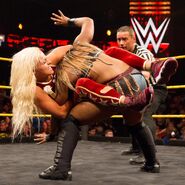 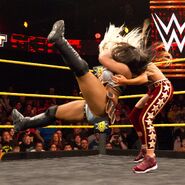 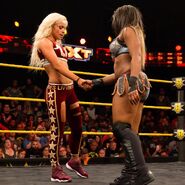 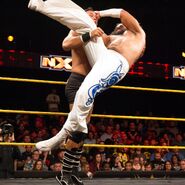 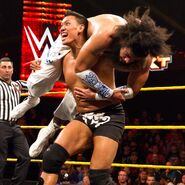 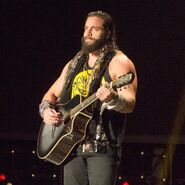 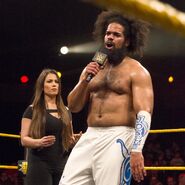 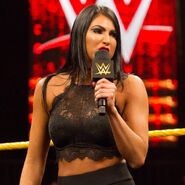 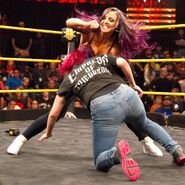