Although we don't know the identity of Raw's anonymous General Manager, we do know this much; The GM can hold a grudge. When World Heavyweight Champion Edge visited Raw for a match with WWE Champion The Miz, the GM – who had previously clashed with The Rated-R Superstar – ordered him to participate in an Over-the-Top Rope Challenge featuring Jack Swagger, Drew McIntyre and Tyson Kidd, all vying for the No. 40 spot in Sunday's Royal Rumble.

Wade Barrett isn't going away – no matter how much we wish he would. The former leader of The Nexus confronted the man who replaced him, CM Punk, who had gleefully introduced his group's newest member, Mason Ryan. This time, though, Barrett brought reinforcements – his new group, The Corre, including Ezekiel Jackson, Heath Slater and Justin Gabriel.

Before the situation became too incendiary, Raw's GM intervened to arrange a match pitting Barrett against Punk with one significant stipulation: The loser of the bout will see himself and his entire group exiled from the Royal Rumble Match. And the contest's special guest referee? None other than John Cena!

Last week, The World's Strongest Man put on clinic by outlasting 10 Superstars in an Over-the-Top Rope Challenge. This week, however, Alberto Del Rio & King Sheamus rained on the thunder and lightning duo of Henry & John Morrison. In fact, the moneyed Mexican surprised just about everyone when he managed to lock a cross armbreaker on The World's Strongest Man and forced him to tap out.

The good news for Natalya? The Divas Champion successfully defended her title against Melina in a fevered battle. The bad news? Lay-Cool continues to haunt her. After the bout, WWE's Mean Girls, Layla & Michelle McCool, informed Natalya that they were invoking their championship rematch clause and will clash with her this Sunday at Royal Rumble in a 2-on-1 Handicap Match.

When two champions collide, sparks are bound to fly. And WWE Champion The Miz and World Heavyweight Champion Edge did not disappoint. As the two squared off, Edge's SmackDown nemesis, Dolph Ziggler and girlfriend Vickie Guerrero watched from ringside.

Just when it appeared The Rated-R Superstar was aiming for the jugular, Ziggler grabbed his leg and hit Edge with a Zig Zag. The interference caused Edge to win by disqualification. Amid the chaos, Randy Orton slithered to the ring to avenge the vicious beatdown Miz and his assistant Alex Riley doled out last week. The Viper not only attacked Miz, causing the WWE Champion to win by disqualification, he went on a rampage against anyone he could coil his hands around until "The Awesome One" nailed him with a briefcase before slinking away up the entrance ramp.

As love triangles go, the one involving The Bellas and United States Champion Daniel Bryan is a doozy. In a Six-Person Tag Team Match, Nikki couldn't keep her head in the ring, focusing instead on sister Brie and the object of their mutual affection, Bryan. So distracted was she by the interaction between Brie and Bryan that she allowed Maryse to capitalize, bringing victory to her teammates, Ted DiBiase & Alicia Fox.

After the bout, Brie and Nikki made a shocking discovery. As the two barged into Bryan's dressing room, they were greeted by the U.S. Champion kissing fellow Diva Gail Kim. The claws quickly came out, and Kim and The Bellas eventually had to be pulled apart.

For all their boasting, The New Nexus actually bring the goods. Members Husky Harris & Michael McGillicutty challenged WWE Tag Team Champions Santino Marella & Vladimir Kozlov in a non-title match. The CM Punk disciples proved they can handle their own when they overcame the international men of misery as their fellow Nexi looked on.

Trouble began brewing even before the bell rang. When CM Punk and Wade Barrett prepared to scuffle, they were backed up by those respective groups, The New Nexus and The Corre. Special guest referee John Cena, however, wasn't taking any chances and decisively banned both factions from ringside.

Once the action kicked off, each Superstar fought as if their lives depended upon it. So intense was the skirmish, in fact, that the two appeared to disregard Cena's instructions. As a result, the special guest referee had no choice but to disqualify each man, effectively banning both of their groups from the Royal Rumble.

Raw's anonymous General Manager begged to differ. Instead, the GM reinstated both groups and demanded that Cena apologize to Punk and Barrett, or it would be he who would be banned from Rumble competition. Reluctantly, 2010's WWE Superstar of the Year offered a contrite apology. He was then surrounded by members of both groups, who appeared eager to punish Cena. Before they could, however, Big Show and several members of the Raw roster emerged, resulting in one of the biggest, most brutal melees ever on Monday night – mere days before the biggest Rumble in history. 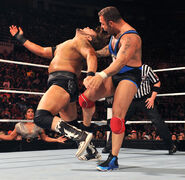 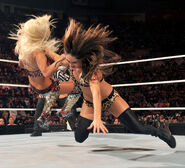 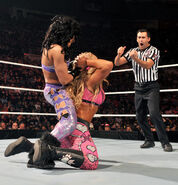 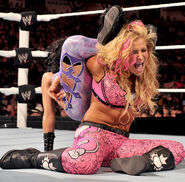 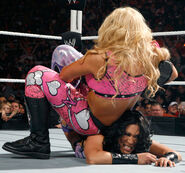 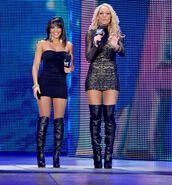 Retrieved from "https://prowrestling.fandom.com/wiki/January_24,_2011_Monday_Night_RAW_results?oldid=1557158"
Community content is available under CC-BY-SA unless otherwise noted.