January 2
The January 2, 2019 NXT UK results.1 was a Professional wrestling television show of the WWE's NXT UK brand. It took place on November 24, 2018 at the Liverpool Olympia in Liverpool, England. It aired on the WWE Network on January 2, 2019.

In the height of the action between Travis Banks and Jamie Ahmed in the opening moments of NXT UK, The Kiwi Buzzsaw once again emerged victorious over his opponent with a Slice of Heaven springboard inseguri off the ropes.

As the dust cleared on his win, Banks received a surprise visit from Jorden Devlin, who blatantly insulted the victorious competitor by questioning his national pride and inferring that he had abandoned his homeland.

One week after Fabian Aichner helped Marcel Barthel score his first NXT UK victory over Mark Andrews, the treacherous tandem joined forces to take on Kenny Williams & Amir Jordan, as they looked to show General Manager Johnny Saint that they are indeed the tag team division's No. 1.

Despite a dynamic showing of their opposition, Aichner completely neutralized the Lucky-In in the final moments by dropping him on the ring barricade. This paved the way for a brutal two-on-one assault on The Bhangra Bag Boy that led to an impressive victory for the “European Union.”

Amidst the turbulent competition of the NXT UK Women's division, the fun-loving Candy Floss brought the full-weight of her colorful offense to bear against Jinny. But, the no-nonsense Fashionista would have none of it, offering her opponent an extreme makeover in the form of A Touch of Couture.

Moustache Mountain squared off against Gallus’ Mark Coffey & Wolfgang in a high-stakes main event to determine the first finalist in the hunt to become the NXT UK Tag Team Champions at NXT UK TakeOver: Blackpool.

In the height of the ultra-intense matchup that included an epic German suplex by Bate on both members of Gallus, Coffey suddenly waved his brother Joe Coffey, out to ringside and up onto the ring apron. But, before Joe could interfere on his cohorts’ behalf, WWE United Kingdom Champion Pete Dunne joined the party and took down the Iron King, opening the door for Bate & Seven to overcome their opponents to earn a place in the Finals at TakeOver.

Nevertheless, Gallus attacked them from behind and ignited a huge post-match brawl. After British Strong Style momentarily vanquished their foes from the ring, Dunne revealed that he had talked to Johnny Saint and that he would face Joe Coffey for the WWE United Kingdom Title at TakeOver.

Gallus then reentered the ring and the two trios continued to brawl as the show went off the air. 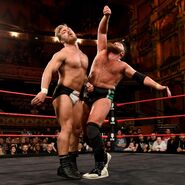 Retrieved from "https://prowrestling.fandom.com/wiki/January_2,_2019_NXT_UK_results.1?oldid=1557108"
Community content is available under CC-BY-SA unless otherwise noted.