The stakes couldn't have been higher when Jinder Mahal kicked off Team Blue by taking on Xavier Woods, with the winner advancing to the Final of the United States Championship Tournament.

With Woods and Mahal being flanked by The New Day and The Singh Brothers, respectively, the two Superstars battled it out in the ring knowing that they each had formidable backup at ringside, at least until Samir & Sunil tried to get involved and Big E and Kofi Kingston chased them to the backstage area. The Modern Day Maharaja attempted to use his size and strength edge to leverage out a victory, but The New Day member refused to go down easy, using every tactical advantage he could find throughout the contest.

However, despite a valiant showing from Woods, he suffered a major setback when he missed his signature top-rope elbow drop. From there, Mahal brutalized Woods, throwing him neck-first into the bottom rope and drilling him with a brutal Khallas to advance to the Final.

After an incredibly intense staredown last week, Bobby Roode faced off with Mojo Rawley on SmackDown LIVE with a spot in the Final of the United States Championship Tournament up for grabs.

Rawley, bursting from the seams with his new brash attitude and youthful aggression, took the fight to The Glorious One early in the contest. Primed for an upset of epic proportions, Rawley did not account for Roode's perseverance, with the former NXT Champion finally edging out the young lion with the Glorious DDT for the win.

The victory party would be short-lived for Roode, though, as he was soon blindsided in the ring by The Singh Brothers, who snuck in several cheap shots before scurrying away. After the attack, Jinder Mahal stepped onto the stage and made it clear that he planned on taking Roode down next week. The Glorious One then vamped on the microphone, declaring that he didn't need to wait until next week for the Tournament Final, as he and Mahal could square off for the star-spangled title tonight.

Liking what he heard, SmackDown LIVE General Manager Daniel Bryan hit the scene to confirm that the match to determine the new United States Champion would indeed happen tonight, much to the delight of Roode and the chagrin of Mahal!

With the conflict between The Riott Squad and the rest of the Team Blue Women's division escalating by the week, Ruby Riott, Liv Morgan and Sarah Logan squared off against the all-star team of SmackDown Women's Champion Charlotte Flair, Naomi and Becky Lynch.

The momentum swung back and forth, as both sides attempted to assert dominance while also looking to gain a critical edge less than two weeks away from the historic first-ever Women's Royal Rumble Match.

In the bout's critical moments, a surging Naomi was hitting anything that moved, but with the referee distracted by the melee outside the ring, Ruby drilled the former SmackDown Women's Champion with an illegal kick from the apron, and Morgan capitalized by planting Naomi with an impressive jaw-jacking maneuver to pick up another huge win for The Riott Squad.

With both Superstars having already won grueling battles earlier in the evening, Bobby Roode and Jinder Mahal went toe-to-toe with the iconic United States Championship on the line.

The two Superstars engaged in a hard-hitting contest, as SmackDown LIVE Commissioner Shane McMahon and General Manager Daniel Bryan watched from ringside. Roode and Mahal were unrelenting, both going deep into their playbook while vying to become United States Champion for the first time.

With Roode in serious jeopardy, The Glorious One seamlessly countered the Khallas into the Glorious DDT for the 1-2-3, sending the WWE Universe into a frenzy, becoming the new United States Champion and ensuring that the star-spangled title was now... GLORIOUS. 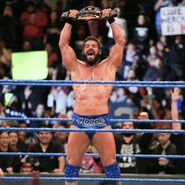 Retrieved from "https://prowrestling.fandom.com/wiki/January_16,_2018_Smackdown_results?oldid=1557083"
Community content is available under CC-BY-SA unless otherwise noted.