The January 12, 2004 Edition of RAW is a Professional wrestling television show of the WWE, which took place at the Nassau Coliseum in Uniondale, New York.

The more Randy Orton boasted about being the new Hardcore Legend, the more it seemed that his claim could very well be true. On RAW from Long Island, New York – just 15 miles from the home of Hardcore Legend Mick Foley – Orton not only called out Foley, he gave him every incentive to make an appearance on RAW. However, a front row seat for RAW and free limo ride to the arena were not enough for Foley to make an appearance. Orton was certainly ready, as he focused more on Foley than his Intercontinental Championship defense against Rob Van Dam. And the crowd was also ready, as chants of “We want Foley” echoed throughout the night. If there was an ever night for Foley to defend his Hardcore Legend status and refute Orton's claims, this was it.

But alas, Foley did not show and the seat reserved for Foley stayed vacant the entire night, save a brief stay by Orton himself during his defeated of RVD. But the battle Orton wanted to determine who could claim status as the Hardcore Legend did not take place.

While Foley did not make a return to RAW, the Coliseum crowd was brought to its feet by the return of a man who made a splash just as big. Goldberg stormed to the ring at the invitation of Stone Cold Steve Austin – who called out any opponent who would like to face an angered Matt Hardy. Not only did Goldberg decimate Hardy, but he also made it clear that his mission hadn't changed. He earned a spot in the Royal Rumble and claimed that he would win and then regain the World Heavyweight Championship at WrestleMania XX.

Goldberg was involved in a second bombshell moments later when an altercation with Scott Steiner – who also entered the Rumble – led to a challenge for a match next week on RAW!

In other RAW action, after weeks of battling back and forth with Ric Flair & Batista, the Dudley Boyz got their rematch for the World Tag Team Championship. Moments after Batista defeated D-Von Dudley, it was announced that not only would the two teams meet at Royal Rumble, but they would do so in a Tables Match! The announcement made the Rumble an even hotter event as the Tables Match will be on a card that already includes the Last Man Standing Match between Triple H and Shawn Michaels, the SmackDown match between Brock Lesnar and Hardcore Holly for the WWE Championship and the Royal Rumble itself.

For the Last Man Standing match, Jonathan Coachman joined J.R. and Jerry “The King” Lawler for the second straight week, and this time he also scored a major interview when he hosted Triple H and Shawn Michaels in the middle of the ring. The result was an emotional exchange between the former best friends, an exchange that turned dangerous for Coachman himself when Michaels demonstrated just how fast Triple H could become the last man standing as he floored Coachman with some Sweet Chin Music, knocking him unconscious.

RAW also saw a new chapter to the ongoing saga between Trish Stratus and Chris Jericho when Jericho declared that he was finished with Stratus. Moments after Stratus tried to come to Jericho's aid during his match with Mark Henry, Jericho claimed he would no longer pursue Stratus. However, at the same moment, Stacy Keibler convinced Stratus to confront Jericho with her feelings on their situation. By the time Stratus made her way to Jericho's locker room, he had left the arena.

In the main event, Randy Orton, despite getting cut open early on after hitting his head against the steel post, managed to hold his own and defeated RVD with a devastating DDT from the top turnbuckle. 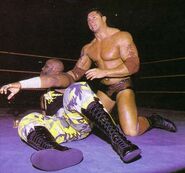 Retrieved from "https://prowrestling.fandom.com/wiki/January_12,_2004_Monday_Night_RAW_results?oldid=1626621"
Community content is available under CC-BY-SA unless otherwise noted.