The January 11, 2010 Edition of RAW is a Professional wrestling television show of the WWE's RAW brand, which took place on January 11, 2010 at The Target Center in Minneapolis, Minnesota. The Guest Host was Mike Tyson.

As professional boxing's former Undisputed Heavyweight Champion of the World, Mike Tyson enjoyed a reputation for delivering the knockout punch in no time flat. As special guest host of Raw, however, the "Baddest Man on the Planet" held off until the final round to deliver a shocking KO to the WWE Universe—and especially Chris Jericho.

It takes a brave soul—or a foolish one—to interrupt Mike Tyson. As Raw's special guest host, Tyson greeted the WWE Universe when WWE Champion Sheamus cut him off and questioned his toughness. Before the two could settle their differences, however, a trio of Superstars injected themselves into the conversation in an effort to prove that they should get an opportunity at the WWE Title.

After Randy Orton, John Cena and Kofi Kingston pleaded their respective cases, The Celtic Warrior argued that he should be excused from having to defend his title at the Royal Rumble. Tyson wasn't having it. Instead, the boxing legend arranged a Triple Threat Match between the three with the winner earning No. 1 contender status.

With Melina forced to vacate the Divas Championship due to a serious leg injury, the first round of the Divas Championship Tournament continued. This week, two leggy lovelies, Alicia Fox and Kelly Kelly, competed to advance in the eight-Diva tourney. When the pixie dust cleared, it was Alicia whose aggression proved too much for Kelly Kelly as she notched the win. Alicia now joins Maryse and Gail Kim in the second round.

They seemed the perfect competitive complement: Mark Henry's powerful yin to Evan Bourne's high-flying yang. Yet even this potent pairing couldn't overcome The Legacy's Cody Rhodes & Ted DiBiase. With all four Superstars among the 30 participants in this year's Royal Rumble, each seemed eager to prove themselves and gain momentum in the run up to the Rumble. Rhodes & DiBiase, though, along with Legacy ringleader Randy Orton, appear to have found their groove recently, making it exceedingly difficult to throw them off track.

It's been a long time since Mike Tyson has fought inside a ring, but all that changed on Raw! The boxing legend agreed to team with Chris Jericho against DX in his first-ever WWE match. Adding to the intrigue, Tyson and DX's Shawn Michaels have a sordid history, including when the boxer acted as referee and betrayed HBK at WrestleMania XIV, delivering a quick count to allow "Stone Cold" Steve Austin to win.

What's a-matter you, Jack Swagger? The former star collegiate wrestler issued an "All-American American" challenge to the entire Raw roster, daring anyone to throw him over the top rope. Braving the bruiser, Santino Marella took up the gauntlet and, in an odd twist of circumstances, pulled off the feat when Swagger tried to heave The Italian Stallion over the top rope and tumbled himself.

Enemy of my enemy is my friend. By that logic, John Cena and Kofi Kingston should be the best of buds. After all, each has had major issues with the arrogant Randy Orton. When the three met in a Triple Threat Match to determine the No. 1 contender to the WWE Title against Sheamus at Royal Rumble, however, it was Orton who emerged victorious. Not that he did it alone.

The Viper prevailed with a distraction, compliments of his Legacy henchmen, Cody Rhodes & Ted DiBiase. While the alliance had been teetering, the trio seems to have solidified their partnership in the past two weeks.

When MVP triumphed in a Fatal Four Way Match and earned an opportunity at the United States Championship, The Miz sat ringside extolling his superiority. When he came face to face with that same Superstar, though, Miz instead tried to level him with a cheap shot. The Franchise Playa wasn't fazed and flipped the script on the U.S. Champ, attacking and sending the former reality TV star scurrying from the ring.

Check your brackets—we're down to the final four. In the Divas Championship Tournament, Eve advanced to the second round with a win over new Raw recruit Katie Lee Burchill, who, along with her brother Paul, had been banished from ECW. Eve next faces off against Maryse while Gail Kim battles Alicia Fox.

It seemed too good to be true at the time. After 12 years of hostilities, Mr. McMahon and Bret Hart had appeared to reconcile last week before The Chairman turned on the "Hit Man" and dropped him with a Judas kick. Addressing his actions tonight, Mr. McMahon said that he'd been waiting 12 years to exact revenge for Hart spitting on and punching him in 1997 - and that Hart will never again be in WWE.

He may have won the Match of the Year Award going away for his bout with The Undertaker at last year's WrestleMania, but that isn't good enough for Shawn Michaels. While he won accolades and awards, he failed to win the match and stop the Deadman's 17-0 WrestleMania winning streak. Which is why The Showstopper officially challenged The Phenom to a rematch at WrestleMania XXVI in Phoenix.

In his first-ever WWE match, boxing great Mike Tyson played a little rope-a-dope with his partner Chris Jericho. Earlier in the evening, Tyson had agreed to team with Jericho against Unified Tag Team Champions DX. If Jericho had won, he would be legally allowed to appear on all WWE brand shows.

Unfortunately for Jericho, this isn't WrestleMania XIV. It was then that Tyson turned his back on Michaels and helped "Stone Cold" Steve Austin win, even ripping up his DX T-shirt after the match. This time, Tyson instead embraced Michaels & Triple H, turning his back on his arrogant partner and knocking him out. With Jericho dazed, Tyson's transformation became complete when he joined DX, including Hornswoggle, for a celebration in the middle of the ring. 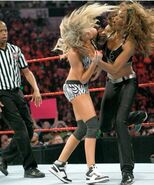 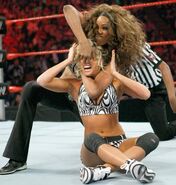 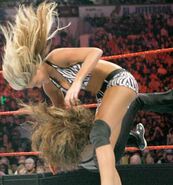 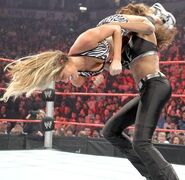 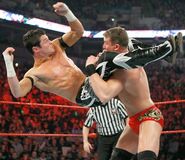 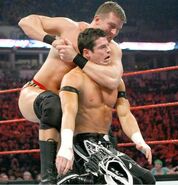 Retrieved from "https://prowrestling.fandom.com/wiki/January_11,_2010_Monday_Night_RAW_results?oldid=1597861"
Community content is available under CC-BY-SA unless otherwise noted.