January 17, 2018
The January 10, 2018 Edition of NXT is a Professional wrestling television show of the WWE, which took place at the Center Stage Theater in Atlanta, Georgia on January 4, 2018.

It didn't take long for Mae Young Classic finalist Shayna Baszler to send a terrifying message to the rest of the NXT Women's division, including its popular titleholder, Ember Moon.

Coming off a pair of disturbing incidents at the WWE Performance Center where she took liberties with her fellow NXT recruits, The Queen of Spades made her in-ring debut against New Zealand's Dakota Kai. The former UFC fighter overwhelmed the kick-loving Kiwi, working over her left arm and shoulder and twisting her limb in all sorts of unhealthy ways. After she viciously stomped the arm, causing it to bend in gruesome fashion, the referee ruled that Kai could not continue and declared Baszler the victor.

Unsatisfied with the damage already done, Baszler attacked Kai again as she was being treated by NXT's medical team and locked in the Kirifuda Clutch before Moon rushed into the ring to stop the brazen newcomer. Baszler backed off and left the ring with no further trouble, though her menacing smile suggested her campaign of intimidation is just getting started.

Despite a lackluster win-loss record, Raul Mendoza has shown time again that he can hang with some of NXT's very best, and he got another opportunity tonight when he faced one of the brand's most respected Superstars, Kassius Ohno.

Cognizant of his size disadvantage, Mendoza used his speed, agility and innovative lucha libre moves to get Ohno off his feet. The deceptively fast Knockout Artist, however, eventually caught Mendoza and stopped his flurry with a big boot to the face followed by the High-Tension Elbow Strike to pick up the win.

#NXTAwardFutureStar nominee Lio Rush tried mightily to escape the reach of Lars Sullivan and frustrate the leviathan with his quick-hitting offense. It worked, too ... at first.

Despite the sound strategy, The Man of the Hour's luck ran out when NXT's one-man wrecking ball finally got hold of Rush and began tossing him around like a ragdoll. Sullivan thrashed Rush with an avalanche and crossface strikes before finishing him with the Freak Accident for the decisive win.

Afterward, Sullivan took the microphone and made clear his desire to destroy Killian Dain, the SAnitY big man who put Sullivan through a table during Dec. 27's wild Fatal 4-Way No. 1 Contender's Match. Perhaps seeking to put an exclamation point on his dominant performance and send warning to The Beast of Belfast, Sullivan then returned his focus to Rush, demolishing the young Superstar with an organ-jarring Freak Accident off the second rope for good measure.

NXT Tag Team Champions Bobby Fish & Kyle O’Reilly were scheduled to defend their titles against former titleholders SAnitY, but WWE cameras caught Undisputed ERA laying out Dain, Eric Young & Alexander Wolfe in the locker room area prior to the bout. The attack rendered SAnitY unable to compete, and O’Reilly & Fish, along with Adam Cole, took it upon themselves to brag about their actions in the middle of the ring. An enraged Nikki Cross tried to claw her way toward the faction, but NXT officials prevented the psychotic Scot from doing so.

Infuriated by Undisputed ERA's actions, NXT General Manager William Regal stated that O’Reilly & Fish would still defend the championships, paving the way for Roderick Strong and Aleister Black — two of the ERA's toughest rivals — to enter the scene and forge a makeshift team.

With Regal's blessing, a new but equally thrilling NXT Tag Team Title Match was made official on the spot. The Dutch destroyer took the fight to O’Reilly at the start, but Fish interjected behind the ref's back, turning the tide in the champions’ favor. Undisputed ERA utilized quick tags to methodically work over Black until the gifted striker broke free and tagged in Strong, setting off a rapid series of moves by The Messiah of the Backbreaker.

As Strong & Black continued mounting a comeback, Cole made his presence felt, taking a cheap shot at Black. The Panama City Playboy hightailed it up the bleachers in Center Stage, and Black gave chase, leaving Strong to fend for himself against Fish & O’Reilly. Moments later, the champions wiped out Strong with Total Elimination to claim victory. Black raced into the ring but was overpowered by Undisputed ERA's numbers advantage. Cole then added insult to injury, sending Black crashing onto a steel chair.

Though Cole was all smiles after Undisputed ERA's beatdown on Black, his demeanor changed when Regal reappeared and revealed that Cole will meet Black in an Extreme Rules Match at NXT TakeOver: Philadelphia on Saturday, Jan. 27. What kind of extreme retribution could await Cole in The City of Brotherly Love? 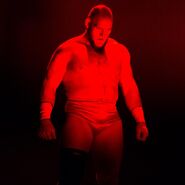