Inside Out is a 2011 crime-drama film directed by Artie Mandelberg. The film features Triple H, Michael Rapaport, Parker Posey, Michael Cudlitz, Julie White, Bruce Dern and Jency Griffin. It was released on September 9, 2011.

After 13 years in prison, A.J. (Triple H) is released and reconnects with his now-married friends, Jack (Rapaport) and Claire Small (Posey). Jack is a small-time hood under the thumb of his criminal father, Vic (Dern). An accidental shooting brings A.J. back into a world he had hoped to leave behind. 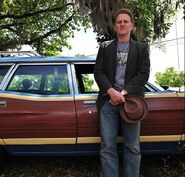 Retrieved from "https://prowrestling.fandom.com/wiki/Inside_Out?oldid=1281577"
Community content is available under CC-BY-SA unless otherwise noted.