The X Division was established on June 19, 2002 at Total Nonstop Action's first weekly PPV event with a Six Man Tag Team match resulting in Jimmy Yang, Jorge Estrada, and Sonny Siaki—collectively known as The Flying Elvises—defeating A.J. Styles, Jerry Lynn, and Low Ki. Later that day at the taping of the next weekly PPV event, TNA introduced the X —then known as the X Championship—to showcase the division more prominently. The division is described as wrestling reinvented, as it takes traditional wrestling and mixes it with the fast-paced, high–risk style of wrestling incorporated in cruiserweight divisions and lucha libre. The division was until 2011 promoted under the motto "It is not about weight limits, it is about no limits" by commentator Mike Tenay. On the August 11, 2011, edition of TNA's primary television program, Impact Wrestling, TNA authority figure Eric Bischoff announced that from that point onwards the X Division would have a weight limit of 225 lb (102 kg). Following Hulk Hogan becoming the new on-screen General Manager in March 2012, the weight limit was ignored on June 10, 2012, at Slammiversary when the 280 lb (130 kg) Samoa Joe was allowed to challenge for the belt. On October 2012, the weight limit was officially repealed when 237 lb (108 kg) Rob Van Dam challenged for, and eventually won, the title at Bound for Glory. In March 2013, the X Division was given a new set of rules, which meant all matches were wrestled in Triple Threat format, and a new weight limit of 230 lbs. This proved to be extremely unpopular with fans, and the rules and weight limit were repealed once again in August of that year.

The X Division has multiple styles of match types used to showcase the talent within the division. Three of the matches used are the Ultimate X match, The Steel Asylum, and the Xscape match.

The championship was created and debuted before the main event at the taping of TNA's second weekly PPV event on June 19, 2002; the event aired on June 26, 2002. Later, A.J. Styles defeated Low Ki, Jerry Lynn, and Psicosis in a Four Way Double Elimination match to be crowned the inaugural champion; this match was announced as being for the NWA X Championship on the onscreen graphic while the ring announcer stated it was for the "NWA–TNA X Championship". Afterwards, the title was renamed the NWA–TNA X and then shortened to just the TNA X . This is the oldest title in TNA.

Option C is a concept in which the current X Division Champion may voluntarily vacate the championship in exchange for a TNA World Heavyweight Championship/Impact World Championship match. It began in June 2012 when then-champion Austin Aries said that he was not satisfied with being just the X Division Champion, which led to then-General Manager Hulk Hogan offering him a match for the World Heavyweight Championship, but only if he first vacated the championship (as Hogan didn't want the same wrestler holding both titles).

Aries agreed to Hogan's terms, on the condition that the X Division Champion be given the same opportunity in future years. Aries would then relinquish the championship. The following year, Hogan asked then-champion Chris Sabin if he wanted to vacate the championship and challenge for the TNA World Heavyweight Championship, which Sabin accepted. Below are a table of the results of those matches:

The inaugural champion was A.J. Styles, who won the championship by defeating Low Ki, Jerry Lynn, and Psicosis in a Four Way Double Elimination match on June 19, 2002 at TNA's second weekly PPV event. At 301 days, Austin Aries' first reign holds the record for longest in the title's history. At less than one day, Eric Young's only reign, and Chris Sabin's sixth reign are the shortest in the title's history. Chris Sabin holds the record for most reigns with eight. 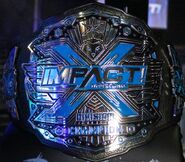