1 hour per episode (44 minutes plus commercials)

"The Gun Show" by In This Moment

October 5, 2002 – present
Impact Wrestling Xplosion, formally TNA Xplosion is a television program produced by Total Nonstop Action Wrestling (TNA) now Impact Wrestling which features both highlights from Impact Wrestling (TV Series) and exclusive taped matches. It is now produced for international markets and on Impact Wrestling's Twitch.tv channel. It currently airs in Canada on The Fight Network, in Asia and the Middle East on ESPN Star Sports, the Arab World on MBC Action, in Australia on One HD, and is available on the Extreme Sports Channel in the UK.

Xplosion was launched on November 27, 2002 as TNA's only regular cable show and featured exclusive matches from the TNA Asylum as well as exclusive interviews with TNA Superstars.

On November 18, 2004, the show became a recap show of the previous week's Impact! in light of alterations in the taping schedule. However, Xplosion resumed airing exclusive matches (billed as "Xplosion Xclusives") once more on October 7, 2005 in addition to recapping Impact!. The "Xplosion Xclusives" also aired on the now-ceased TNA Global Impact! internet show.

All of the matches seen on Xplosion are taped ahead of time along with Impact!. Matches normally feature wrestlers who rarely appear on Impact!. Occasionally, wrestlers may make their debut or return on Xplosion and angles have also taken place.

As of May 2006, the hosts of the show are ring announcer/backstage reporter Jeremy Borash and SoCal Val. Airing of Xplosion in the United States ceased at the end of 2006 although some of the exclusive matches could be seen on TNA Today.

Beginning December 22, 2008, "Xplosion Xclusive" matches are broadcast as web matches on the TNA website and TNA's YouTube page. The show was revamped at the June 14, 2010, tapings, becoming more of an original program instead of a highlight show, with Jeremy Borash working as the lead play-by-play commentator. This was confirmed by Dixie Carter, who announced that Xplosion would be re-fitted to feature new and exclusive matches with the TNA Superstars, as well as updates on everything TNA, including coverage of its flagship series Impact!, saying “TNA features more talented superstars than ever before in company history, so it made sense to refresh Xplosion and make it a more important part of the TNA brand.” In addition to the format changes, Xplosion received a new logo, graphics and theme music performed by Victory Records recording artist Taproot. At the May 16, 2011, tapings, Desmond Wolfe was announced as the new Xplosion Commissioner. 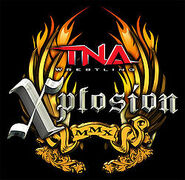